“Thank you for showing me what it's like to be human. Maybe I almost was.”
— Slimecicle to Quackity in the Dream SMP roleplay before losing his first life[1]

Dap Duo is the friendship between Quackity and Slimecicle from the Dream SMP fandom.

Quackity finds Slimecicle hidden in a restaurant while he tries to blow it up. Quackity holds Slime hostage in an attempt to get information from him. Slime tells Quackity that he's a mutated piece of slime and about the other members on the Dream SMP. Slime also uses the phrase "dap me up", which is the origin of Quackity and Slime's duo name. Quackity realizes how much Slime knows and hires him as a spy for Las Nevadas. Quackity also gives Slime the name "Charlie". Slime never had any friends before Quackity and refers to him as his closest/best friend.

After Technoblade escapes prison, Purpled tells Quackity that someone left a chest at the side of the casino. Slime checks it but notices nothing is in it. Purpled flips a switch and the three are now on a platform around a lava pit. Purpled questions Quackity about the revival book and the two fight. Quackity says that he doesn't have the book and he wouldn't give it to Purpled even if he did have it. Purpled turns around and attacks Slime, pushing him into lava. Quackity jumps after him and places sand. He attempts to get Slime on the sand to save him, but Slime doesn't and dies. Before dying, he thanks Quackity for showing him how to be human.

Quackity, visibly in a worse state, holds two books and goes to see Slime. Slime is more green and dormant, and Quackity explains to him that he was writing more chapters. He leaves the books in a chest and sees that there's another book. The book has six pages of unreadable text, but Quackity is still surprised to see that Slime made it.

Quackity brings the book to Foolish Gamers to try to decipher the text. Foolish can't help much because the text is all jumbled together, but he helps Quackity see some letters sticking out. The letters spell "LEGACY". Quackity remembers when he told Slime that legacy is all you leave behind. Quackity goes back to where Slime was only to see that he left.

Quackity, in real life, is shown on a beach finishing a letter to Slime. He leaves the letter by a box. The box seems to be a Las Nevadas box. The letter reads, "Slime, Wherever this box may find you, in life or in possible death, know that I will fulfill our legacy." The letter is washed up by the sea.

“Slime,
Wherever this box
may find you,
in life or in
possible death,
know that I will
fulfill our legacy.
- QUACKITY
FROM
LAS NEVADAS”

Dap Duo became popular after Quackity and Slimecicle's characters met on the Dream SMP. People liked how Quackity was Slime's first friend and how Quackity grew attached to Slime. The duo got a significant amount of attention after Quackity jumped in lava without hesitation to try and save Slime. The duo has a decent amount of fan art as well as fan fiction. On AO3, they have 196+ gen works and 329+ romantic works.

Some people romantically ship their Dream SMP characters, imagining that Quackity would get with Slime to make his fiancés jealous. Though, TNT Duo is the more popular ship for this type of situation. People normally don't ship them in real life because of Quackity saying he's uncomfortable with that. Others see Slime and Quackity as father and son instead. Overall, most people just view the Dap Duo as a friendship instead of a slash or family ship. 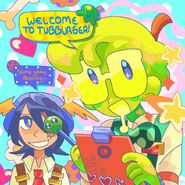