DekuJirou is the het ship between Izuku Midoriya and Kyouka Jirou from the My Hero Academia fandom.

Despite not having too much interaction with each other, Izuku and Kyoka they mutually respect each other and care for one another. Both can become shy when they come under pressure or are praised by their classmates.

Like most of his classmates, Izuku is impressed by Kyoka's musical abilities and praises her in congratulations. Kyoka also finds Izuku's notebook very interesting and impressive, where Izuku notes his classmates' abilities.

In the Quirk Apprehension Test Arc, Kyoka and Izuku were seen several times close to or behind each other. For the U.S.J. Arc, after the League of Villains escapes from the U.S.J., Kyoka along with others of her classmates are concerned for Izuku's safety when he was taken to the hospital and are relieved when Naomasa Tsukauchi reveals that his life is not in danger.

At the U.A. Sports Festival Arc, Kyoka glanced slightly at Izuku in the Obstacle Course when he fell behind and then continued running. Later his teams face each other in the cavalry battle. During the Vs. Hero Killer Arc, Kyoka initially wonders how Izuku will do in the Rescue Training Race and is amazed by Izuku overcoming the drawbacks of his Quirk.

In the first movie: Two Heroes, Kyoka watches Izuku talk to Melissa Shield alongside Ochako Uraraka and Momo Yaoyorozu, thinking that the two were on a date. Then when the three of them go to interrupt the conversation, Kyoka reveals to Izuku that he used his earphone jacks and heard everything that Izuku and Melissa were talking about, much to Izuku's discomfort and calling Kyoka's Quirk the greatest weapon of stealth. Izuku later asked Kyoka to use her Quirk to bury himself from All Might's state and they learn that the villainous Wolfram is holding the island hostage.

During the School Festival Arc, a flashback of Kyoka and Izuku is shown in which Kyoka asks Izuku for help on taking and revising her notes for the band. They share a friendly moment with each other in which he is impressed with her initial note taking and proceeds to help her leading up to the School Festival. They seem to be on friendly terms from this point on with Izuku using her memory as one of many to push on in his fight with Gentle Criminal in order to prevent him from cancelling the event and to make it back in time to help in her performance.

In the Joint Training Arc, Izuku is greatly shocked when Katsuki Bakugou saves Kyoka from Togaru Kamakiri's attack in their match against Class 1-B. During the last match of training, he is Izuku's tuno to fight Class 1-B, but during the fight his new Quirk spirals out of control despite his struggles to stop him, and Kyoka is shown to be visibly worried about him.

In the second movie: Heroes: Rising, Class 1-A is on Nabu Island doing community work and Ochako receives a phone call from a girl who lost her brother somewhere on the island and when the call ends, her asks if someone can help her find the missing boy, to which Izuku and Kyoka volunteer to help her. Kyoka is confused at to why the girl got mad at Izuku for “taking too long”.

After the resulting battle with Tomura Shigaraki in the Paranormal Liberation War arc, Izuku along with other classmates end up in the hospital and Kyoka appears outside the hospital room, and after telling about Denki Kaminari and Fumikage Tokoyami's condition to Ochako, Kyoka asks if Izuku has already woken up from his coma. After waking up, Izuku escapes from the U.A. and Kyouka along with the rest of Class 1-A are determined to bring him back. During the battle between Class 1-A and Izuku, Kyoka uses her new super move, Heartbeat Wall, to attack Izuku and tells him that she was very happy that he not only helped her organize notes during the School Festival, but also sharing a hobby of note-taking. Kyoka also commented on how Izuku got stronger.

Kyoka and Momo were shown to be relived when Ozuku finally feel asleep.

Although their Ship has long been considered a reasonably local het variant for Kyoka Jiro amongst people who don't ship MomoJirou and KamiJirou, DekuJirou quickly gained explosive popularity after manga and anime adaptation events.

The great emphasis on Izuku Midoriya helping Kyoka during the festival arc at the end of the third season of the anime and his recognition of Kyoka as his most important person in the manga chapters that were released at that time made many people sincerely believe that the relationship between the two has excellent potential, many interpret his words to be romantic. However, his words weren't explicitly stated to be romantic. 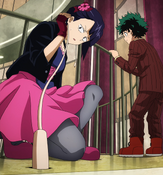 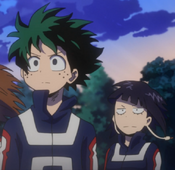 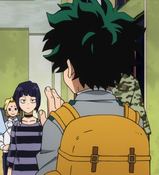 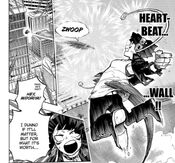 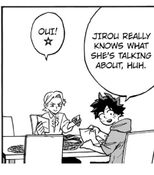 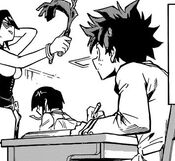 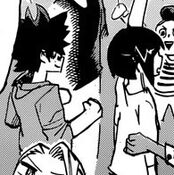 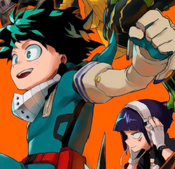 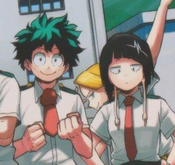 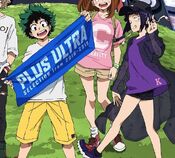 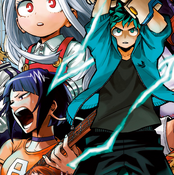 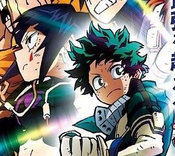 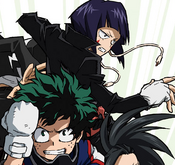 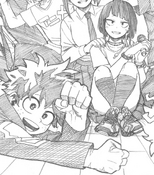 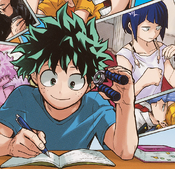 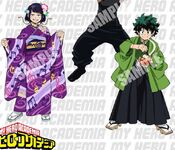