DekuNeta is the slash ship between Izuku Midoriya and Minoru Mineta from the My Hero Academia fandom.

After the villain attack on the USJ, Izuku and Minoru, as well as Tsuyu are stranded on the Flood Zone of the USJ. The boys both struggle in the water until rescued by Tsuyu, who lifts them up onto a nearby boat with her froggy tongue. The students then make it their mission to get to safety, and then to assist Eraserhead in his battle against the Nomu. Minoru is reasonably freaked out during the duration of the event, and is startled by Izuku’s plans, but follows along, and later changes his stances on them.

In the 1st Movie: Two Heroes, Minoru refuses to go save the people in the I-Island, asking Izuku doesn't he learns from the USJ Villain Attack. Izuku says that it's not like that, he'll figure out how to save everyone without fighting the villains. After some convo, everyone agrees to join except Minoru, and after Minoru says that he'll join, Izuku thanked him and Minoru's eyes got sparkle immediately. Izuku cheered for Mineta and helped them get to the top and Mineta in turn cheered for Izuku when him and All Might fought Wolfram.

Before U.A’s summer break begins, the girls discuss using the school pool as a place to hang out during the summer. Minoru, as well as Denki overhear this, and become interested. Once summer begins, they show up at Izuku’s home and invite him to join them at the pool. Unbeknownst to their shenanigans, Izuku happily agrees. It is revealed that the true motive behind having Izuku with them was not that of a typically friendly action, but out of knowledge that he was a good kid, and would throw suspicion off of their girl-peeping. Once the three arrive, Izuku reveals that he’d invited the rest of their class to join them for training, to the chagrin of Minoru and Denki.

After returning home to the dorms, the work study students (Izuku, Ochako, Tsuyu, Eijiro) are crowded by their worried peers, who were unsettled by their absences. Minoru yells at Izuku for not calling them to say they were alright, and is eventually pushed away by Tenya, who requests for him not to overwhelm Izuku and the others.

The two worked together against Class 1-B and Izuku held Mineta in his arms after the match. In the third movie, Mineta dismisses the news of Zulu being a mass murderer.

As Izuku rampages, and attempts to flee his classmates, Minoru catches his back with a thread of his sticky grapes, a move dubbed “Mineta Beads: Tenfold”. Izuku glares at him, and struggles to throw him off. Minoru takes the opportunity to tell Izuku that it was never Izuku’s power of strength that made Minoru think he was awesome, but that he “fell for him” when he was “scared and sweating buckets, and quaking in his [your] boots,” referring back to their time spent at the USJ. He says that this is because Izuku managed to find a path forward, no matter how bleak the situation appeared. It isn’t long after that Izuku finally manages to shake him off, however.

Once Izuku returned to U.A. and started crying due to Ochaco’s emotional speech defending him, Mineta started crying too and ran to hug Izuku. However, Iida held him back to Mineta’s confusement because it was not their place. Afterwards, Mineta (who was still in tears), alongisde Kota, ran up to hug Izuku and Mineta later helped strip and bathe Izuku. He also agreed with Izuku that they should forgive Aoyama.

Despite everything the series has brought, the DekuNeta controversy is perhaps the strangest- and funniest dramas to occur within the MHA/BNHA fandom. After a fan mistranslated Minoru’s words about “falling” for Midoriya in Chapter 321, it was widely misinterpreted for a love confession by the majority of the fandom and caused him to trend widely across Twitter, and more than double the number of tweets on his hashtag, most of which ‘congratulate’ him on ‘coming out on his bisexuality’, or portray him and Izuku in newfound romantic relations, although most of this seems to be created with satirical intention.

Like every ship involving Minoru, DekuNeta is quite controversial when brought outside of satire, given Minoru’s girl-lust and pervish behavior. This doesn’t completely rule out possiblity of a fanbase, however, and the ship does carry itself, as most ‘rare-pairs’ tend to. Minoru is, on occasion, a rare addition to the Dekusquad, and his friendship with Izuku is more commonly accepted than the concept of their romance. 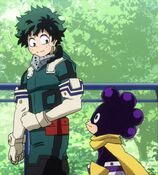