DekuYama is the slash ship between Izuku Midoriya and Yuga Aoyama from the My Hero Academia fandom.

Izuku and Yuga grew up with similar pasts due to both of them being Quirkless when they were kids and received a Quirk that allowed them to live their dream and be accepted by society, with the difference that Izuku received his Quirk when he was a teenager while Yuga it received as a child. A big difference between the two was the person who gave them their Quirk (being All Might the Symbol of Peace who gave his Quirk to Izuku while Yuga received his Quirk from All For One, the Symbol of Evil).

Although Yuga was distant with Izuku at first, after realizing that Izuku has a hard time adjusting to his Quirk just like him, Yuga takes a sudden interest in Izuku, and begins to act rather strangely around/towards him, something that does not go unnoticed by fellow peers, more specifically Izuku’s friends, and more importantly, Izuku himself, although he doesn’t seem to think too much of it at the very start.

The two first met at the entrance exams where Yuga saved Izuku from being attacked by a robot, though he did this for points as he remarked that the latter made good bait and he would most likely not see him again. Izuku later excelled in the exams and became classmates with Yuga. At the end of one class period, Izuku mutters “I’m starving!” At this, Yuga creeps eerily close to him, and with a blank smile, stuffs a piece of cheese into his mouth, saying “Here, have some cheese ~” This causes Izuku to startle, and exclaim that Yuga scared/surprised (depending on translation) him, and question, “Cheese?” Yuga gives a brief on that specific cheese, before simply looking off, to Izuku’s confusion.

That night, Izuku wakes to a sudden noise outside his room. As he looks up from his bed to investigate, he sees a shadowed Yuga on his deck, peeking through the curtain before swiftly disappearing, a grim expression on his face all the while. Izuku thinks to himself about how creepy that was, and wonders if he should go check on Yuga, or see what he was up to. Upon reaching his deck, he notices a plate of small cheeses laid out to spell “I know ☆” ( “知っている ☆”). He, once again startles at this, likely unsettled about what it could be that Yuga “knows” (such as his feelings for Ochako or the secret behind his quirk).

When he next sees Yuga, who simply winks at him and whispers “Surprise!”, which unnerves Izuku once more. He nervously smiles at him before heading to his desk. He thinks about why Yuga has started acting out like this towards him, as they’d never interacted much prior, then deciding that he should leave the issue unaddressed, as Yuga must have a reason for doing so. Later, during a training exercise, Yuga calls Izuku’s attention, as to have him watch his new “ultimate” move, which he dubs ‘Navel Buffet Laser’. However, this takes a lot out of Yuga, which Izuku notices, then taking him aside to let him take a break from training. As they walk, Izuku takes the opportunity to question why Yuga had been acting strangely. Yuga then reveals that he’d noticed that Izuku’s quirk was rather ill-suited to his body, in the same way that Yuga’s was to his, saying that this gave them a sort of ‘invisible bond’. He then adds that he’d noticed Izuku feeling a bit stressed since his work studies, and was, as Izuku realized, attempting to cheer him up. This brings a grin to Izuku’s face, and its later stated that he and Yuga became fast friends after this, to both of their happiness.

After Izuku returns to the U.A. after the Paranormal Liberation War, thanks to Hagakure, Izuku learned that Yuga was the traitor who had been helping All For One and Izuku tells Yuga that he realized how gloomy he looked and, believing that something he was wrong, and he went looking for him when he got away from the rest of Class 1-A. Hearing his words, Yuga regretfully admits to Izuku that he was the one who helped the League of Villains since he entered U.A., declaring himself a "despicable villain". When Izuku stops Yuga and his family with his Blackwhip and takes them to the police and UA staff, Yuga begins to say that after seeing Izuku, another former Quirkless person, fighting so hard againt All For One, It made him realize how pathetic he was, wallowing in his own despair and calling himself a villain through and through. However, Izuku retorts, asking why he tried to save Katsuki and Fumikage during the Training Camp, as well as asking about the cheese message, realizing that it was a cry for help, and that’s why he’s crying now. He claims that doing something wrong doesn't make you a villain for the rest of your life as he extends his hand to Yuga, telling him that he can still be a hero in the same way that All Might did with him at the beginning of the story, while Yuga looks at him surprised by his words.

Izuku – “What's he thinking?!”
Yuga – “We are so very alike!”
— A part from Izuku's relationship section in the Ultra Analysis Archive data book.

As the two only began to interact notably quite late in the series, leaving time for alternate ships for the Yuga and Izuku to take rise (such as MinaYama or TodoDeku), DekuYama is not too popular in the MHA/BNHA fandom, and is left a ‘rare-pair’, albeit one with slightly more traction than most. Additionally, the interaction they did have was interpreted in several ways outside of what Yuga told Izuku, one of them being a sort of sudden ‘crush’ on him, leading to a desire to get closer. However, there is no true evidence for this in the end. 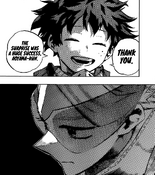 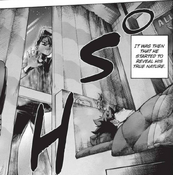 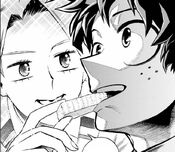 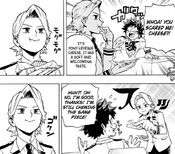 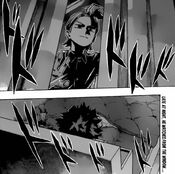 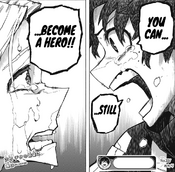