Never met (do not exist within the same universe)

Dekunette is the het ship between Izuku Midoriya and Marinette Dupain-Cheng from the My Hero Academia and Miraculous Ladybug fandoms.

As Marinette and Izuku are from different series, even though both of their home universes have superheroes, they have never met in canon.

Marinette and Izuku have both started out in having low confidence in themselves and have trouble standing up to their blond bullies, until they came across someone who is in need of help and get granted powers as a reward. The Ladybug Miraculous and the One for All quirk, that were both entrusted to many heroes before them as they connect them to the lines of their users. While the ones who gave them these powers become their mentors, their new powers also allowed the two to make friends at their schools and to build up the confidence in themselves and others. The only down sides to their powers is the limits that has them being carful when and how they use them, as well as them placing a target the their backs, since there are those who wish to clam their given powers for themselves. Along with the two having to keep their powers a secret from their friends, as while Izuku comes from a superpowered people world and Marinette as a partner and a few allies to help her keep Paris safe, Izuku can't tell his friends how he got his quirk just as Marinette cannot tell her friends or family that she is Ladybug.

Similar to how Marinette reacts around Adrien Agreste, Izuku is shown to get flustered while his face turns pink when Ochako Uraraka, Mei Hatsume and Melissa Shield were too close to him. While Marinette was never friends with Chloé Bourgeois during their early years like Izuku was with Katsuki Bakugo, both Chloé and Katsuki have picked on Marinette and Izuku in the past as the two didn't do anything to stand up to them, until after they got their powers. A little similar to how Izuku has been able to mend his friendship with Bakugo during the later parts of their hero lessons and other hero related events, Marinette has discovered that Chloé can be a kind person and her lending Chloé the Bee Miraculous has helped her to bring it out. A bit like how Izuku shared One for All with Bakugo in My Hero Academia: Heroes: Rising, along with both with both Izuku and Marinette fighting beside their former bullies and friends from their schools in big battles. During the first part of season 4 in Miraculous Ladybug series and at the end of the Paranormal Liberation War Arc in the My Hero Academia manga, the two finally share their big secrets with their closet friends, and due to the things the two have been through since the beginning of their stories they begin to feel a need to protect their loved ones by keeping themselves away from them. Believing that it was the best way to do so.

Like many young heroes, the two have faced their fair share of struggles from mistakes they have made as the results sometimes put others in danger or having other people doubt the two from not believing in their abilities. As well as them needing to focus on their school studies despite having a lot in their minds. Like when the two are forced to break one or two rules for the sake of helping others. Due to their kind hearts, willing to listen to other people's troubles to see if they can help them and refusal to give up when it matters. Another thing the two have in common is that they have made tasty treats for a friend and are shown to be good with young children (like Eri and Manon Chamack). Similar to how Izuku served as one of the dancers for the concert his class put on, Marinette auditioned to a background dancer with her friends in Clara Nightingale who she later gives an idea that allows everyone to be in it. As like Izuku, Marinette tends to put others first and they both have a good relationship with their mothers. Some of the people in Izuku's group of friends are a little similar to Marinette's in traits, personalities and how they treat the two.

Dekunette is one of the well-liked ships of the ML/MHA crossover fandom. Some fanfics and art have the two existing in the same universe, where they are both Miraculous holders or U.A. students, or have Izuku traveling to Marinette's universe. While there are fans who het ship them, many prefer to ship them as friends possibly due to Adrienette, Lukanette, IzuOcha and BakuDeku. 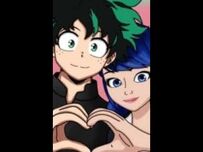