Brothers; both are dead

• The Only One I Trust — Mondo considered Daiya the only person who he could trust while growing up.

Diamond Brothers is the family ship between Daiya and Mondo Owada from the Danganronpa fandom.

Daiya was the older brother to Mondo, who founded and lead one of the most feared biker gangs in Japan, known as the "Crazy Diamonds." Mondo considered Daiya his only family growing up, and was the only person who he could fully trust and respect. Mondo wanted to measure up to his older brother, and so he would imitate him in everything he did. When Mondo thought about how he would have to take over the gang from his brother someday, he became determined to become stronger than Daiya. He also became determined to prove himself to the gang's other members who didn't believe that he could take Daiya's place.

On the night of Daiya's retirement ceremony, Mondo challenged him to a street race. During the race, Mondo became reckless and sped into the wrong side of the road, and in the way of an oncoming vehicle. Just before he was struck, Daiya pushed him out of the way, taking the blow for himself. He died in Mondo's arms, and told him not to let the gang be broken up. It was a "promise between men," which Mondo did his best to keep.

During the Killing School Life, Mondo continued to value the advice his brother left him. This is shown when he promises Chihiro Fujisaki that he will not raise his voice around him anymore, and says that his brother told him a real man always keeps his promises. However, the threat of exposing that Mondo had inadvertently caused the death of his brother was used to motivate him into committing murder, and Mondo eventually snapped when Chihiro revealed to him that he was really a boy and had found the courage to face his fears that Mondo lacked. When his secret was finally revealed, Mondo expressed immense guilt for not only killing his brother, but for not being able to keep the promise he made to him. Before being executed, Mondo apologized to his brother for his failure.

“Sorry, man... I couldn't keep the promise we made... from one man to another...”
— Mondo apologizing to Daiya for failing to keep his promise.

Many fans were moved by the tragic story of the Owada brothers. Some even cite it as one of the saddest moments in the entire series. While there is only a limited amount of information given about the relationship between Daiya and Mondo, fans believe the two were close and cared for each other dearly. Many works of fan fiction often portray Daiya as the wiser, more mature of the two, while Mondo is the more hot-headed one. The ship is popular for both characters, though moreso as family as opposed to anything incest-related. 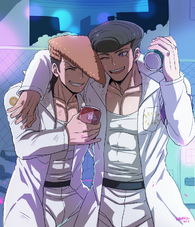 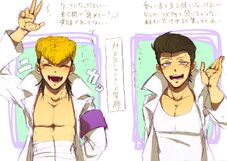