Canon (depending on the story)
Semi-Canon

DickBabs is the het ship between Dick Grayson and Barbara Gordon from the DC Comics fandom.

Dick Grayson and Barbara Gordon have been attracted to one another since they were Robin and Batgirl, respectively. Before a confrontation with the outsider, Dick Grayson, as Robin, confessed his love for Batgirl but then turned and saw that she appeared to be sleeping. However, Barbara had heard him and began to muster up the courage to confess her feelings for him. She approached his college dormitory and knocked on his door, only to be met with Starfire, who Dick Grayson had been dating at the time.

When Barbara was handicapped by the Joker, Dick was on Starfire’s home planet, Tamaran. When he returned, he slept with her, only to hand her an invitation to his wedding to Starfire. Even though Dick’s marriage to Starfire never came to fruition, he and Barbara did not begin a relationship until a later point.

The two nearly married before the infinite crisis event. Before shipping off to fight in the crisis, Dick proposed and Barbara tearfully accepted. However, after he nearly died, Barbara helped train him to get him back to normal health. When Bruce asked Dick and Tim Drake, the Robin of the time, to journey with him around the world for a year, he refused, wanting to stay with Barbara, but she told him to go in a letter, leaving her engagement ring. He wrote her a letter in return, giving her the ring back and promising to swing back to her someday.

In the New 52, the two, now Nightwing and Batgirl, share a few intimate moments, including when Dick interrupts a kiss between her and Luke Fox and after Dick returns from working undercover at Spyral.

In the Rebirth line, the two sleep together in Bruce Wayne and Selina Kyle’s honeymoon suite. Their potential relationship is interrupted when Dick is shot in the head and loses his memory. After Dick’s memories return, during the Death Metal event, the two have a shotgun wedding, officiated by Batman that is undone the following night.

Dick runs towards the reach ship, when Barbara meets him halfway and tells him to wait. She hands him Bumblebee and says that Jaime is keeping Black Beetle busy. She and the others are going to get everyone else to the bioship, but Dick needs to be ready to make a fast exit. Dick thinks she's right, and tells her to execute the plan.

Barbara tells Dick that Bruce walked out of the Justice League with his team, but Dick can't worry about that right now. He asks for the leads and she gives two fronts: A children's hospital, and a Dr who works in genetics. She says he'll need back up, and Dick says that he's way ahead of her.

Barbara is playing a VR game when Dick tries to sneak up on her, but she just throws him over her shoulder instead. She tells him that his attempt was pathetic, and he says since he's a professional acrobat, he meant to do that. He gives her a kiss, and says that he's missed her. She points out that they talk every day, and he hopes she knows that it's not the same thing. They kiss again but are interrupted by a sound from Barbara's Goode Goggles. He asks how she likes them, and she likes them, but prefers her very hot boyfriend. They're interrupted by an alert on her computer.

Dick suddenly gets a call from Barbara, who calls him cuteness. She then gives him all the intel she found on Halo before she lost her memory. Dick says thanks, and attempts to call Barbara adorableness. She laughs but says he needs to work on his pet names.

Dick and Barbara are watching the news on Luthor being pulled from the UN. Barbara says that she hears Troia is the leading candidate for his replacement and Dick loves that. She also tells him that the Outsiders and the League have been seen in a positive light now, and Dick says Justice is back in fashion. She also tells him that her dad turned on the Batsignal again, and Dick asks her to turn on the sound for Tara's trial.

The Lady, or the Tigress?

When it comes to the Batman family, DickBabs is one of the top ten ships among the Batman sidekicks. It is fairly popular among the canon DC pairings as well, many consider them at an iconic level. DickBabs is also the main rival ship of DickKory. 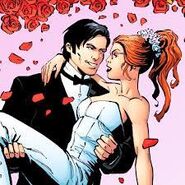 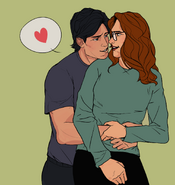