“As long as we're together, we'll be okay.”
— Robin to Starfire.

DickKory is the het ship between Dick Grayson and Koriand'r from the DC Comics, Teen Titans and Titans fandom.

Robin and Starfire always seemed to have connection through the series, but didn't get together until the movie Trouble in Tokyo. Starfire's bubbly, sweet innocence balances with Robin's serious, down to earth vibe. Starfire has secretly harbored romantic feelings for him ever since they first met, though what she does not know is that Robin feels the same way about her. Until the events of the series finale movie, both were too afraid to confess how they really feel about each other, even though it was obvious to all of their friends and even enemies.

Robin and Starfire are shown enjoying a Ferris wheel ride together. On the ride, Starfire tells Robin, "When I first came to this planet, I did not think I would ever fit in. Earth was full of strange things," Gazing at Robin, she finishes, "But now, I see that Earth is full of amazing things, too."

After fighting off an attack from an alien probe, Starfire's sister, Blackfire comes to visit. Starfire is overjoyed to see her but her excitement is dimmed when Blackfire gets along with the other Titans better. What really upsets her though is Blackfire flirting with Robin.

In the show, Robin is shown to have a massive crush on Starfire, but she mostly considered him like a friend and even like a brother. Still, even though Starfire shows no interest in being in love with Robin, there are times when she does express interest toward him in some episodes and even in the movie "Teen Titans Go! To The Movies", where she hugs Robin goodbye after Robin chose to stay with Jade Wilson and work on the movie Robin dreamed of starring in.

Back when Dick was still Robin, he and the first Teen Titans were on patrol when he sees a flying girl fighting winged aliens and once they got closer Robin sees her being over powered by the aliens, before he gets his team to save her. With help from his teammates Robin is able to free her from the alien's grasps, before they close the portal they came out of. The girl he aided was nearly sucked into it herself, but Robin was able to grab her hand in time and the two landed back on the ground, where she thanks Robin before giving him a kiss. The kiss also allows Kory to learn the language of Dick's planet, she explains this to him when their kiss ended. After Kory also explains what brings her to Earth, Robin offers her a place in his team until it was time for Kory to return home. In the end Kory decided to stay on Earth with Dick and the rest of their friends.

In the current timeline of the animated film series, Dick's time as Robin had ended a long time ago when he became Nightwing and left the Titans, but he and Kory stayed friends. When it was time to start a new Teen Titans team, with Starfire as one of its original members to guide the next generation of young heroes, Dick brings in Damian to serves as its new Robin in his place. He and Starfire greet each other as he drops Damian off, along with explaining the reasons why Damian was added to her team. When Starfire was having trouble getting through to Damian she videocalls Dick for help on the subject, since he knows the new Robin better than her.

Sometime before Teen Titans: Judas Contract, Dick had decided to re-join the Tians as he helps Kory and their growing allies on the field and during their training. The other Titans can see that Nightwing and Starfire are very close, as Dick has asked Kory to move in with him after they completed one of their field missions. The two lie on the he couch and presumably have sex after some kissing with Kory on top.

Dick and Kory/Koriand'r team up to look after Rachel Roth. 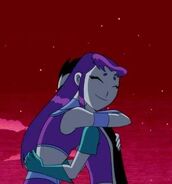 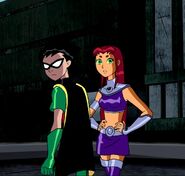 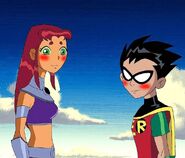 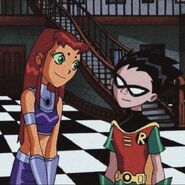 Comfort from a "Lone-Wolf" 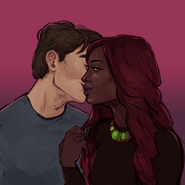