DiluVen is the slash ship between Diluc Ragnvindr and Venti from the Genshin Impact fandom.

Diluc Ragnvindr, nicknamed “The Uncrowned King of Mondstadt” by the citizens, is the wealthiest bachelor and owner of Mondstadt City’s premier winery, the Dawn Winery. He is also known to own Angel’s Share, a well-known tavern in Mondstadt City. As shown in the game, as well as in numerous official and promotional art, Diluc works part-time in the tavern.

As for Venti, he is known to the people as the “Most Popular Bard of Mondstadt”. His favorite pastime after working throughout across the city is spending all his earned coins on Angel’s Share’s alcohol. Little do people know, his true form is that of a wind elemental, and his true identity is that of Mondstadt’s then-presiding god: the Anemo Archon and the God of Freedom, Barbatos.

Diluc and Venti first met in the second act of the Archon Quest prologue, wherein Venti and the Traveler were shown to be escaping the Knights of Favonius guards after stealing the Holy Lyre der Himmel. Although at first suspicious of their intentions, even when asked about the pair’s whereabouts, Diluc had not exposed them.

Venti’s introduction of Diluc to the Traveler, as well their ensuing conversation thereafter, implies a level of familiarity with each other. Later on, Diluc ends up implicated in Venti’s plan to save Dvalin, as Venti had entrusted him with the information in order to do so.

Aside from that, the second part of Act II has revealed that Diluc had a feud with the Fatui over a vial of the Anemo Archon’s breath, which is considered a priceless artifact. Diluc himself had told the Traveler and Paimon that he had bought over 2,000 counterfeits of the vials that the Fatui had manufactured, irrespective of whether it was authentic or not, which earned the astonishment of Paimon. Still, it did not stop Paimon from making a proposition with Diluc should they find the real vial, to which Diluc accepted with the reward of a beer for every 20 they find.

From that moment on, Venti and Diluc have worked together in order to rescue Dvalin. They were shown to convene in the Dawn Winery. The penultimate part of Prologue: Act II shows Venti, Diluc, the Traveler, and Jean on Starsnatch Cliff in order to meet with Dvalin. However, a conflict revealed Venti’s true identity as the Anemo Archon to Diluc and Jean. Dvalin, under the influence of an Abyss Mage, had attacked Venti in a fit of rage, and it was shown in a cutscene that Diluc was the first to run towards Venti to check on him.

It is not only in the archon quests did Diluc and Venti interact, but they had also made appearances in a few characters’ story quests. In Venti’s story quest, Diluc featured in the first part of Act I, during when Venti and the Traveler were assessing random people to see if they had imaginary friends or not (Diluc had none).

In Jean’s story quest, while Venti is enjoying the festivities, Diluc was revealed to be keeping track of his “alarming pace of progress through [Diluc’s] wine.” Diluc also stated that he will present Venti the exorbitant bill once he sobers up, though when Paimon calls him out for being mean, Diluc had retracted his statement and said that it was a joke. Additionally, although so subtle as to go unnoticed by majority of the players, Diluc was shown to be smiling as he said that.

In Venti’s voiceline about Diluc, Venti is shown not to be surprised at the Traveler wanting to befriend him, assuming that the Traveler was able to sample all of the vintage wine that Diluc had stored away in his cellars. He seemed surprised when the Traveler said that they weren’t able to. In another voiceline, it is mentioned that Venti had once pilfered food from the Dawn Winery, although he was unfortunately caught in the act.

Diluc has no voicelines about Venti, although he was referred in Mona’s voiceline as the Anemo Archon.

It can be said that Diluc’s descendants has long been intertwined, or at least involved with Venti, dating back to when Venti was an elemental being, as shown not only on Venti’s story quest cutscene but also implied in the lore of the weapon, Windblume Ode.

The long history goes as such that there was once a red-haired knight who had been involved in a resistance group against Decarabian. Interestingly, the resistance group included the elemental being that used to be Venti’s original form, as well as Venti’s friend, the Nameless Bard, whose form Venti took after. The red-haired knight was implied to be the ancestor of Ragnvindr (not to be confused by Diluc Ragnvindr himself), who then joined Vennessa’s rebellion in the aristocracy. It is also interesting to note that Venti, now the Anemo Archon, had aided in the rebellion. Generations after, and now in the present, it is now Diluc himself who had offered his assistance in rescuing Dvalin.

“I’m not surprised you want to befriend Master Diluc, just think of all vintage wine he must have stored away... Mwuhahaha... Huh? He doesn’t let you sample it? Not even the slightest drop? Huh... Well, I guess you can still appreciate the aroma. That’s still better than no wine at all, right? No?”
— Venti’s voiceline, About: Diluc

“Oh, such a humble god... Is it a blessing, or a curse?”
— Diluc about Venti, Archon Quest Prologue

“He is Master Diluc, the boss of... ah, the owner of this tavern. He’s very famous. By the way, his dandelion wine is one of my favorites. Though most of the time I can only afford a bottle or two...”
— Venti introducing Diluc to the Traveler

“I mostly decided to do it on a whim. Though I must say, that bard is quite intriguing.”
— Diluc, when asked why he is helping the Traveler

Venti – “If I tell you the story with a performance, will you believe me?”
Diluc – “It depends. I'll make my own judgement.”
Venti – “Then will I get paid?”
Diluc – “Your reward will range from anywhere between five Mora and the Holy Lyre. It all depends on your story.”
Venti – “Very well. Let me put on a show...”

A popular fanon dynamic for DiluVen depicts Diluc as the tired yet considerate bartender who serves Venti, the happy-go-lucky yet broke regular who frequents his tavern. Another popular depiction is where Diluc is shown to buy things for Venti, which has caused the inside joke among the shippers that Diluc is Venti’s sugar daddy. Some fanworks show Diluc having a soft spot for Venti and looking out for him. Some show the two mutually looking out for each other or things being the other way around with Venti looking out for Diluc.

Because Venti is a god, fans have also enjoyed the concepts of the god/worshipper, god/protector, and mortal/immortal tropes for DiluVen. Aside from that, because of the long history between Barbatos and the Ragnvindrs, the reincarnation trope is also popular for this ship.

Within the fandom, DiluVen is seen to be a semi-popular ship. Its rival ships consist of the more popular ships for the two such as KaeLuc and XiaoVen. Although not as big as aforementioned two, the ship still sees a steady growth in its shippers. DiluVen also sees its fair share of anti-shippers, and used to often get involved in conflicts due to the discourse surrounding Venti’s age. Recently, however, the ship hate has gradually lessened. 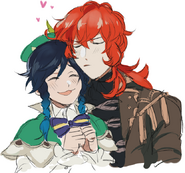 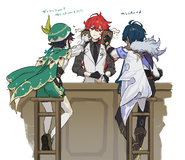