Disc Duo is the friendship between Dream and TommyInnit from the Dream SMP fandom.

Dream and Tommy are friends, though they are also somewhat enemies or rivals. Tommy often goes out of his way to annoy Dream, though the two are still good friends that support and care for each other. Dream claims that Tommy is a close friend of his and he says that Tommy often checks up on him. He also has given Tommy his stream key and has him as a moderator on his subreddit. Tommy gets a lot of advice from Dream, especially about YouTube. He considers Dream a close friend as well but plays up a Dream anti persona on his streams.

Both of them have worked on some of the Dream SMP story arcs, and are considered main characters in the series.

While Tommy was streaming on Twitch for about three hours, Dream invited him to the Dream SMP. Tommy did many things to annoy Dream as much as possible. Dream eventually decides to steal two discs from Tommy, Cat and Mellohi, which Tommy valued very much and considered his most prized possessions. The discs go back and forth between the two, and Dream even threatens to burn the discs amidst everything. Later, Dream burns fake discs while fighting Tommy and Tubbo to get a reaction out of them.

Tommy was the second person to lose a canon life on the Dream SMP at the hands of Dream after Eret's betrayal in the Final Control Room. Dream and Tommy later had a duel over L'Manberg's independence, which Tommy lost.

Ranboo and Tommy once decided to rob GeorgeNotFound and burn down his house. Since the whole operation was Tommy's idea, Tommy faced punishment for his actions and was exiled from L'Manberg.

While Tommy had some fun during exile, he still became miserable being alone with Dream. He attempted to invite everyone to a beach party, though Dream stopped the invitations from being sent. Tommy is very sad to see that no one showed up to his party and is led to believe that Dream is his only friend. Whenever Tommy made progress and started to get better gear, Dream normally told Tommy to put everything in a hole so he could explode Tommy's items with TNT. Tommy became so miserable that he started to become suicidal and even attempted to commit suicide at one point.

The last day of Tommy's exile was the day of the Green Festival. Dream frames Tommy for the destruction of the Community House. At the time, Dream had the Cat disc and attempted to get the Mellohi disc from its current possessor, Tubbo. As Tubbo was about to hand over the disc, Tommy interrupted. Tommy and Tubbo had an argument that ended with Tommy stating that the discs were worth more to him than Tubbo was. Tommy orders Tubbo to give the disc to Drea, and Tubbo does as told.

The next day, Dream and Technoblade destroyed L'Manberg with many withers and TNT. This upset Tommy as he was a citizen of L'Manberg and the relationship between Dream and Tommy worsened.

After the war, Tommy was greeted by his home, destroyed by Dream, turned into netherrack and lit on fire. In the middle was a chest that had a compass named "Your Discs". Tubbo and Tommy decided to follow the compass and confront Dream. The two met Dream atop a very tall mountain and they fought. Tommy managed to get the Mellohi disc from Dream just as Dream was close to killing Tubbo. Tommy was left with a decision to either let Tubbo die or give Dream the disc back. Tommy decided to give up the disc. Dream then blows up all of Tommy and Tubbo's items.

Dream took Tommy and Tubbo to Pandora's Vault where he reveals to have everyone's prized possessions. Dream stated that he believed he could control the server if he had the things people were attached to. Dream also revealed that Pandora's Vault had a prison that Tommy could be held in. At the last second, Punz swiftly arrived with many of the Dream SMP members. They all protected Tommy and Tubbo from Dream and Tommy was able to kill Dream twice, leaving him at his last life.

Right before Dream was about to lose his last life to Tommy, he told Tommy about how he had the power to bring people back to life with a necromancy book. Tommy decided against killing Dream since death would be permanent if Dream died and he wanted Wilbur to be alive. Dream was placed in an obsidian box and later taken to prison.

Tommy visited Dream a few times. The last time he visited, a security issue happened that caused the prison to go into a lockdown. After about a week of being stuck in prison with Tommy, Dream told him that he wouldn't give the necromancy book to anyone until he escaped prison. Tommy started to believe that the necromancy book was fake. Dream beat Tommy to death with a potato then later revived him, traumatizing Tommy.

While dead, Tommy realized that he did not want to bring back Wilbur and that Dream should be killed. Ghostbur helps Tommy sneak into the prison and attempt to kill Dream. The plan fails and ends with Ghostbur being killed by Dream and Wilbur being revived by Dream.

After learning of Dream's escape from prison, Tommy starts panicking and builds walls of cobblestone to protect himself. He remembers he left the Axe of Peace in Logstedshire and heads for Dnret. Tommy looks for the Axe of Peace and is relieved when he sees that the chest that he left it in is still there. He finds that the axe isn't in the chest though and turns around to see Dream breaking the nether portal he came from.

Tommy immediately puts up his shield and Dream welcomes Tommy back to exile. Dream tells Tommy that he's back home and Tommy demands that Dream gives back the Axe of Peace. Dream and Tommy have a conversation, though Tommy is still on edge. Dream threatens to revive Tommy and kill him over and over again. Dream digs a hole and asks Tommy if he wants to put his stuff in it, referring back to when Dream would make Tommy put his things in a hole and blow them up in exile. Dream tells Tommy that he could die and no one would care. Unlike back in exile, Tommy snaps back, telling Dream that people would care. He starts yelling about how Dream gets in people's heads. He ignores what Dream tries to say and tells him to go back prison and that no one likes him.

Dream starts chasing Tommy and attacking him, asking him to say hi to Jschlatt for him as Schlatt is dead. Tommy enderpearls away but dies after hitting the ground too hard. He and Dream start to laugh about it since the moment was a blooper and Tommy wasn't supposed to die. Dream teleports Tommy back to get his stuff and Dream immediately attacks Tommy again, yelling about how he's going to kill him. Though the two have to pause to laugh and talk before resuming the roleplay.

Tommy runs away in a panic and the two argue. Dream taunts Tommy and plays with him by attacking him. Tommy reaches Ph1lzA's house and seeks help. In a panic, he explains what happened to Phil and hides.

“Morning Dream you really are a ray of sunshine”
— Tommy[4]

Disc Duo is a popular duo for both Tommy and Dream. It's the fourth most written relationship for Dream on AO3 and the eighth most written relationship for Tommy on AO3. Many enjoy the dynamic between Tommy and Dream and how their rivalry on the Dream SMP caused many of the major plot points. Fans like how despite seemingly hating each other, Dream and Tommy truly care for each other and see each other as friends. The name "Disc Duo" comes from the fact that all the wars and fighting between the two started with the Cat and Mellohi music discs.

While there are a few people that ship Dream and Tommy as a slash ship, it is highly hated by many due to their age gap and Tommy being uncomfortable with shipping. The ship is also hated because of the fact that Dream's character was the manipulator and abuser of Tommy's character.

On Twitter, people are a part of "disctwt," a subtwt in which people are interested in the Disc Duo. 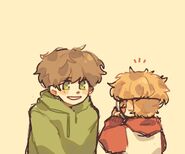