Domestic Avengers is the relationship between the Avengers team, often incorporating S.H.I.E.L.D. characters such as Phil Coulson, or even villains like Loki.

The initial team, consisting of Iron Man (Tony Stark), Captain America (Steve Rogers), the Hulk (Bruce Banner) and later the god of thunder Thor Odinson, meets aboard a S.H.I.E.L.D. helicarrier at the request of S.H.I.E.L.D. director Nick Fury and his Avengers Initiative. The four heroes, as well as Black Widow (Natasha Romanoff) and Fury, meet in Banner's lab and bicker, argue and generally dislike one another. Loki Odinson, Thor's adopted brother, attacks the helicarrier with Tesseract-controlled S.H.I.E.L.D. agents including Hawkeye (Clint Barton). Rogers finds out S.H.I.E.L.D. has been collecting old HYDRA weapons and after fending off the HYDRA agents allied with Loki, steals a ship with Thor, Stark, Banner, Romanoff, and Barton to go to New York, where Loki has opened a wormhole to let in an alien army called the Chitauri. The Avengers battle the Chitauri in what is later known as the Battle of New York. The council notifies Fury that they are sending a nuclear bomb to New York to destroy the extraterrestrial invasion, and Fury, in turn, notifies the team about it. Stark flies through the wormhole to nuke the Chitauri mothership which subsequently kills all of the Chitauri and thus ending the battle. The Avengers go their separate ways, Thor taking Loki back to their home planet of Asgard and the rest of the team going back to their homes.

The Avengers goes on another mission to attack the HYDRA Research Base. Following their victory, they celebrate it with a party on the Avengers Tower. During the party, they are mostly occupied with different guests and therefore are not collectively together. However, when the guests left, they are chatting together, also joined by Maria Hill, Helen Cho, and James Rhodes, most of them try to lift the Mjolnir. The attempts are unsuccessful, leading Thor to easily conclude that they are all not worthy, followed by chorus of disagreement from the others. All of a sudden, they are interrupted by Ultron who are labelling them as killers.

The group quickly become engaged in a battle with Ultron and they eventually succeed destroying the drones. However, Ultron manages to use the internet as an escape hatch. Following this, they are gathered in the lab to discuss about Ultron. This causes an argument between them, especially most of them putting the blame on Tony, however Tony tries to defend himself, explaining that he was trying to find a solution of dangers from the space. Steve assures Tony that they will face the threat together, and that they will still be together even if they are defeated.

The Avengers then travel to Ulysses Klaue's location and find Ultron along with the Maximoff twins there. They try to battle them, and Wanda try to affect their minds. Clint succeeds avoiding this, with him pushing an arrow to Wanda's forehead, but Steve, Natasha, and Thor begins seeing painful visions. Wanda also manages to turn Bruce into The Hulk, prompting Tony to fight him. Due to this, the public's perception of The Avengers worsens.

With hopes of letting The Avengers relax a bit, Clint brings them to his home, revealing that he has a wife, and a family. There, they try to relax, with the exception of Thor who is leaving to learn about the Infinity Stones. Tony and Steve chop wood together, and Bruce and Natasha are having a conversation together. They are later joined by Nick Fury to discuss about the matter about Ultron even further.

They later become engaged in the Battle of Seoul, resulting with Natasha being held hostage. When they are having a brief fight with the Maximoff twins due to the argument about bringing Vision to life, Thor reappears to activate Vision. After they have some conversations with Vision, Clint receives a signal from Natasha and the team goes to Sokovia. Bruce eventually frees Natasha, and although he has plans of running away with her she rejects the idea by turning him into The Hulk. They battle Ultron and his army of Ultron Sentries alongside the Maximoff twins and Vision, eventually winning over him but at the cost of Sokovia's destruction. Following the battle, the six original Avengers separate due to Thor returning to Asgard to learn more about the Infinity Stones and The Hulk not returning with the Quinjet.

During the events of the Infinity War, the six Avengers are not together. Clint has retired to live a peaceful life with his family. Thor is in outer space following the events of Ragnarok. Natasha has been teaming up with Steve, and they have separated with Tony due to the events of the Civil War. Tony, in the other hand, gets to reunite with Bruce after he is being sent back to Earth. Afterward, Bruce also reunites with Natasha and Steve on the New Avengers Facility and they are later fighting in the Battle of Wakanda. Meanwhile, Tony is engaged in the Battle of Titan. Thor later makes his entrance to the Battle of Wakanda. They ultimately lose due to Thanos being able to do the Snap, causing half of the universe to be gone. The six of them survives the Snap.

Some time after the Snap, Tony is finally being rescued from outer space by Captain Marvel. The Avengers are together in the New Avengers Facility and they get in a discussion about the Snap. Clint is not there, but the Snap has made him lose his entire family. Thor separates himself from everyone else, burdened with anger and guilt. Tony and Steve gets in a heated conversation, the first giving up his Arc Reactor and later faints. While Stark is resting, the other Avengers, excluding Clint, goes to the Garden, hoping to undo the effects of the Snap. However, this proves to be unsuccessful as Thanos has destroyed the Stones. The mission results in Thanos death thanks to Thor, but also further emotional breakdown of the Avengers.

After five years, The Avengers have their own interests and try to move on. Tony settles down to have a family, Thor sets the New Asgard on Earth, Bruce merges himself with The Hulk, Clint becomes Ronin, and Steve works on support group meetings, and Natasha leads the Avengers with the new members. Following Scott Lang's idea of Time Heist, they try to bring the team together again. Natasha, Steve, and Scott visits Tony on his house, later Bruce on a diner, both to discuss the idea of the Time Heist. Natasha reunites with Clint on Tokyo and Bruce reunites with Thor on the New Asgard, both to give hope to them, both who have fallen lowest to depression.

The six original Avengers, alongside the other new Avengers, plan and execute the Time Heist. Steve, Tony, and Bruce goes to the New York City in 2012 alongside Scott. Thor goes to Asgard in 2013 with Rocket, and Clint goes to Vormir in 2014 with Natasha, causing the latter's sacrifice to obtain the Soul Stone. The remaining Avengers mourn Natasha's death outside the New Avengers Facility, with Bruce charging the team to make it worthwhile. Bruce successfully does the Blip to bring everyone back, but they have to confront Thanos who has been traveling from past in the Battle of Earth. The fight results in Tony's ultimate sacrifice to save the universe, with the remaining Avengers attending his funeral. Thor names Valkyrie the King of Asgard and then joins the Guardians of the Galaxy, meanwhile Clint continues living with his family. Steve travels back in time to return Mjolnir and the Infinity Stones, then settles down in the 1940s to marry Peggy. He grows old and gives his mantle and shield to Sam, then enters retirement.

The style of fics that the Domestic Avengers would be a part of began to spring up after the release of The Avengers. On AO3, there are 5000+ works being written about the Domestic Avengers. Many write that Stark Tower had become Avengers Tower, a theory that later became canon, and that all the Avengers were living there. Each Avenger had their own floor or space but there would also be a gym and a group family/entertainment room that they would spend time together. Many fics in this style would also typically have the author's preferred pairing as the focus, with the Domestic Avengers as a setting or background aspect. The most popular scenario of this is arguably Superfamily in which Steve and Tony are having a relationship with Peter Parker as their son, which often includes other Avengers. 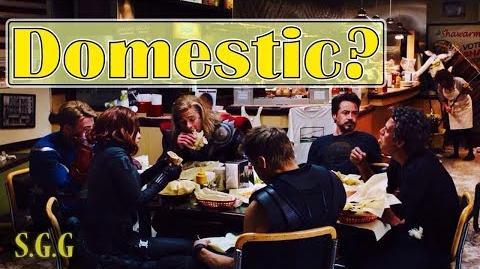