• Adaptational Relationship Overhaul
• Aroused by Their Voice - Daisy loves Donald's singing voice.
• Belligerent Sexual Tension - One of the biggest examples of this.
• Beta Couple - Are normally this to Mickey and Minnie.
• Birds of a Feather
• Covered in Kisses
• Official Couple
• One True Love - They are each other's main love interest in every adaptation.
• Satellite Love Interest - Ultimately subverted.
• Understanding Boyfriend
MOMENTS
• Battle Couple - Against Mr. Falcon.
• Fire-Forged Friends
• Held Gaze - At the end of the episode, Donald and Daisy stare into each others eyes.
• Love at First Sight - In Louie's Eleven Donald has instant heart eyes upon seeing Daisy for the first time.
• Token Love Interest

Donald – “No one listens to me, either. They don't understand me.”
Daisy – “Well, that's weird. I understand you perfectly.”
— Louie's Eleven

DonDaisy is the het ship between Donald Duck and Daisy Duck from the DuckTales fandom.

As Dewey, Louie and Donald are looking in on the museum of Emma Glamour's party, Donald notices a woman ordering everyone around. Donald asks who she is, and Louie says that she's Daisy, Glamour's personal assistant. They need to get her pass if they want to get on stage. Donald can't help but have immediate heart eyes for her, but brushes it off and moves forward with the plan.

As Daisy leaves the room, Louie tells Donald to follow her and get the stage pass. He follows her to the elevator, where he watches her complain about the party, before breaking a vase next to her. The elevator arrives and Donald quickly runs forward, but lets her on first (although he does get stuck in the doors).

Inside, Donald notices the stage pass. He says that it's a beautiful night, but Daisy says that it's been terrible and asks what floor he wants. Donald then "accidentally" hits every button, which Daisy is annoyed by given that she wanted to get back fast. Donald attempts to grab the stage pass, but she notices and he quickly apologizes for being to close. Webby then cuts the power to the elevator and Donald ends up getting caught on Daisy's purse. They argue and try to get undone but it just end up getting worse. They then both notice that the elevator is stuck, and Daisy immediately blames Donald. Donald tries to defend himself, but can't really and the two start to argue. Donald accidentally brings up his "big break" in the process and Daisy suspiciously asks what he means. Donald admits that his band is crashing the party, much to Daisy's shock, and annoyance.

They're eventually able to get untied from each other, when Daisy realizes the stain from her coat is seeping onto her dress. She removes the coat, and reveals a beautiful dress. Donald compliments, which Daisy initially thanks him for but slightly brushes it off. She says that she made it herself and was hoping that Glamour would see it and put on her IT list, so that she can be a real designer. It's now not gonna happen because of the Caballeros dumb plan. She didn't expect Glamour to listen to her either way. Donald says that no one listens to him either, they don't understand him. Daisy says that's weird, since she understands him perfectly and they share a smile. Daisy decides that since they're not going anywhere, Donald should sing her something. Donald is hesitant at first, but does sing, which Daisy loves. Once he's done, Daisy decides that Glamour is gonna hear both of them, and throws her purse at the trapdoor above. A ladder falls down and they out.

In the vents, they search for an exit, and end up a vent over the main room, seeing the hostage situation that has gone down. Daisy asks what happeed, and Donald notices the kids, and tries to find another way out. Daisy follows behind, but pauses a moment to ask that he has kids. They find another vent and continue to watch what happens.

As Falcon grabs Glamour and Mark Beaks, Donald and Daisy leap from the air vents and pin him to the ground. He is able to free himself and fights the two. Donald starts to attack him in a rage, but Falcon throws him across the room. Daisy becomes enraged and is able to knock out Falcon before the police arrive to take him. Glamour recovers herself and starts to blame Daisy for how the party had a hostage situation, but Donald stands up to Glamour and tells her that Daisy was the one to save the party. Glamour says that no one speaks to her that way, but Daisy tells her that they do now. Glamour gives in and tells Daisy that her dress made the IT list. Donald and Daisy then share a smile as the party returns to normal.

As the Three Caballeros perform, Donald starts to sing and everyone instantly covers their ears, except Dewey, Louie and Daisy. Dewey says that it's too bad that the band didn't make the IT list given that Donald's singing is terrible, but Daisy says that she could listen to him sing all night. The two then share one last smile.

New Gods on the Block!

Donald is setting up the house boat for his and Daisy's date, when he is interrupted by Storkules. He tries to get Storkules to leave as fast as possible, just as Daisy arrives. She says hi to Storkules, as Donald assures her that he was leaving. He says that they have a date, and Daisy says that it's their second one. Storkules comes to the conclusion that they're going to be married and hugs them. Daisy asks who Storkules is, and Donald just gives a long sigh.

Donald and Daisy attempt to have their date, but things feel a little awkward with Storkules still there. Donald asks Daisy if she wants some punch, but Storkules takes as a question for him, before realizing his mistake. He goes to get them punch and Daisy quickly asks why Storkules is still there. Donald starts to apologize, when Storkules returns with the punch. Storkules asks Daisy her intentions with Donald, and Daisy says that they're to get to know him better. Storkules insists that he can tell her loads about him, then asks what she does for a living. Donald says that Daisy is a fashion designer, and Storkules starts to ask more questions. Daisy needs to step out for a moment, and Donald tells Storkules that he needs to leave. Storkules decides this means he needs to find a way to improve the date more and runs off.

Donald is distracted waiting for Storkules as he and Daisy have drinks outside. Daisy gets his attention again, and cuddles up to him. Donald starts to relax when he notices Storkules with cupid's arrow. He tries to tell him not to, but Storkules shoots the boat and knocks them into the water. Daisy angrily gets out of the water, and sadly decides that maybe their date was a mistake. She walks away, as Donald floats on the water in despair.

Daisy is driving away from the manor, questioning whether or not to continue seeing Donald, when she sees a Titan in the rearview mirror. She then quickly drives back to the mansion and through the woods, finding Donald in the hand of the Titan. It then swallows Donald, and Daisy screams. It's about to grab her when Storkules is able to hold its hands back. Storkules thinks they can save this, when Daisy yells that it killed her boyfriend. They both then hear Donald inside the Titan's stomach happily cheer over Daisy calling him her boyfriend.

After everyone gets thrown up by the Titan, Daisy rushes to Donald's side to check on him. The two smile at each other, and Donald places his hand on Daisy's face before realizing that it still has gunk on it. She laughs it off and the two kiss. Storkules then interrupts them and calls them a great couple. He then carries them off as they all walk away from the Titan.

New God's on the Block!

Donald – “Who is that?”
Louie – “Ugh. Daisy Duck. Glamour's personal assistant. If we want to get through Glamour, we have to go through her.”
Donald – “(Just after having heart eyes) Whatever.”
— Louie's Eleven 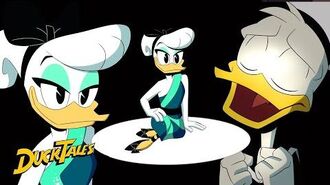