Double Bow is the femslash ship between Blake Belladonna and Penny Polendina from the RWBY fandom.

Blake and Penny first met each other in volume 1 of RWBY. Her and the other members of team rwby were chasing after Sun when they accidentally ran into Penny. When Penny introduces herself to them, Blake seems to think of Penny as strange but kind nonetheless. Blake also defended Penny from Weiss's comment about her not looking like the fighter type, by saying "says the girl wearing a dress".

Penny later then shows up in the final chapter of volume 1 to help Blake and Sun fight against Roman. In volume 2 Penny agrees to help Ruby in her search to find Blake. Then when Ruby tries to explain to Penny what Blake is Penny inquires if Blake is a man. She then exclaims, Oh! the faunus girl and points out that it was pretty obvious that Blake was a faunus. In volume 3 Blake was both horrified and shocked to find out that Penny was a robot and about her sudden death.

They are then reintroduced in volume 7, with Blake saying that seeing Penny again was strangely wholesome. The two are then seen together in volume 8 alongside Nora, Weiss and Ruby trying to break into Ironwood's Base. Blake then jokingly asks Ruby does Penny know more about her semblance then she does. To which Ruby responds that Penny knew she was a faunus before even she did. When Penny crash lands in front of the Schnee Manor Blake helps the others carry her into the house and into Weiss's bedroom.

Later when the virus tries to take control of Penny, Blake is one of the people who tries to hold her down with gamble shroud. Later her and Yang are seen holding her up as they go to the atlas vault. When Penny eventually gets turned into a real girl she runs up to Blake and gives her a big hug. Blake proceeds to happily hug her back. Later in the final episode Blake and Penny are seen fighting Cinder together at some point in the fight.

Double Bow is a rarepair within the RWBY fandom. This is mainly because the two never spoke to each other until volume 8. Many fans think it's a very wholesome ship. Others loved the moment where Penny hugged Blake and then Blake proceeded to hug Penny back in chapter 12. It has a small fanbase on Tumblr. 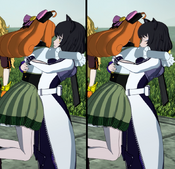 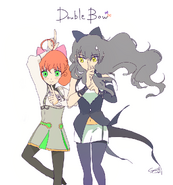