Dragonslayer is the het ship between Jaune Arc and Yang Xiao Long from the RWBY fandom.

Jaune and Yang first met at Beacon when him and Ruby had become friends and Ruby then proceeded to tell Yang about it. Yang and Jaune then became friends by default since he was friends with Yang's sister. In Volume 1, chapter 3 Yang mentions liking seeing all the cute boys at the school, the scene then pans to Jaune walking over in his onesie and looks in Yang's direction, Yang then makes a grossed out face and goes "eww!". In volume 1 chapter 4 after Jaune failed to hit on Weiss, Yang jokingly said "Having some trouble there ladykiller?". Jaune then lamented on the fact that he thought all women looked for in a man was confidence, to which Yang responded "Snow Angel probably wasn't the best start"

As Yang and Jaune settled into their new school life they often sat together with the rest of the members of their respective teams at lunchtime. Jaune then participated in the food fight Yang and Nora started. In volume 2 chapter 3 Jaune once again asked Weiss out on a date and was rejected. Yang then while walking by him quickly ruffled his hair and said "one day". During the vytal festival tournament Yang and the rest of team rwby watched in the audience and cheered on as Jaune and team jnpr took on team brnz. After the fall of beacon, Jaune and the remaining members of team jnpr travelled with Ruby to Mistral in volume 4, while Yang was recovering at home adjusting to her new arm and trying to sort through her ptsd. Yang and Jaune were then reunited in volume 5 chapter 6 along with Weiss. In volume 5 chapter 7 while everyone was eating dinner Yang at one point jokingly, said to Jaune "Easy there vomit boy, I believe you" to which Jaune sarcastically responded "Oh, we're doing nickname throwbacks, wonderful". He then eventually sat down near her and Weiss.

In volume 6 chapter 7 when team jnpr learns the truth about Salem and Ozpin Jaune in a blind rage angrily pins Oscar against a wall and accuses him of already knowing the truth and being a liar to which Yang in a very concerned voice yelled out Jaune's name to stop. In volume 8 chapter 1, after the events in Atlas and Mantle in volume 7, Jaune and Yang decide to team up with Oscar and Ren to help get the rest of the people of mantle to safety. During this time Oscar gets kidnapped by a sentient grimm and her Jaune and Ren try to go after it to save Oscar. While they are chasing the hound, a centipede looking grimm comes out of the ground and spits acid on Jaune's hoverbike causing it to fail. Jaune then jumps out of the hoverbike and gets on the back of Yang's. They contine to fight grimm together on the bike til they realize they're about to drive off a cliff and Yang has to give a sudden stop and they're then proceeded to be thrown off the bike. They then tumble off a cliff and while holding hands they're about to fall to their death when Ren suddenly comes in and saves them.

The three of them are then seen walking through a soon to be blizzard with Jaune hauling Yang's damaged hoverbike in tow. Yang and Ren then get into an argument and Jaune tries to mediate between them and break up the fight. After they find a warm place to rest and after Jaune fails to have a serious talk with Ren about his feelings him and Yang start talking. Yang apologizes to Jaune for Ren's rude behaviour and tells him she understands he's had to try harder than anyone to get to where his is now (despite cheating his way into Beacon). Jaune tells her not worry about it since they're all under alot of stress and he used to push people away too. Yang then has a conversation with Jaune where she confesses her insecurities to him about Ruby and Jaune reassures her that Ruby will always love her since they're sisters. Yang then tells him to take a rest while she keeps an eye on Ren whose still currently sitting outside in the cold.

Dragonslayer is a pairing that's moderate in popularity. It has a moderate sized fanbase on both deviantart and tumblr. After the events of volume 8 though, the pairing has definetly grown in popularity. Most people ship these two because they have similar, happy-go-lucky, laidback personalities. They also have shown to be quite comfortable around each other and have a somewhat understanding relationship with each other. On AO3, the ship currently has 281 fanfics, while FanFiction.Net has 663. 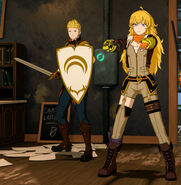 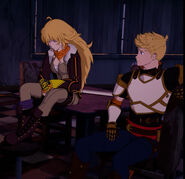 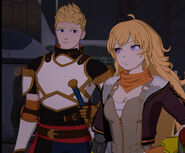 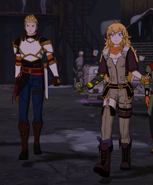