• Enemies to Lovers
• Foe Yay Shipping
• Not So Different

Draco Malfoy has been Harry Potter's enemy since they first met. Draco came from a pure-blood family that believed strongly in blood purity. So, he bullied and insulted those who were muggle-borns and sometimes Gryffindor. He was jealous of Harry Potter being a hero. His ambition was to become like his dad. The two boys were always extremely obsessed with each other, and Draco kept bringing up the fact that Harry denied his friendship in their first year (this because Harry had heard a lot of bad things about Slytherin from Ron Weasley, and Draco had insulted Ron).

Voldemort asked Draco to assassinate Dumbledore but he failed to do so. A year later when Harry was brought to Malfoy Manor to be given to the dark lord. Draco was very reluctant to identify him, even though he knew it was Harry. During, the battle of Hogwarts Harry saved Draco's life twice. Once against Crabbe's Fiendfyre, and from a masked death eater. There is also a theory that only applies to the movies, that in The Chamber Of Secrets when Draco ripped out a paper from a book in the bookshop, it was the same paper that Harry found in Hermione's hand when she had been petrified. The canon story says that she ripped the page from a library book, but Hermione would never do that.

In The Cursed Child book, Harry's and Draco's sons become best friends, and when they're in danger Harry, Draco, Hermione, and Ron rescue them.

In The Prisoner Of Azkaban movie, Draco drew a picture of Harry that was magically moving. He folded a crane and blew it to Harry when they were in the classroom.

Drarry is an extremely popular ship in the Harry Potter fandom, and likely the most popular slash ship in the fandom. Many shippers enjoy the enemies to lovers trope of the ship, and they also enjoy the contrast of dark, brooding Draco Malfoy (A Death Eater) and lighter, heroic Harry Potter (The Chosen One). Also, it effectively gave Draco a much-required redemption-arc. 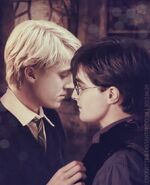 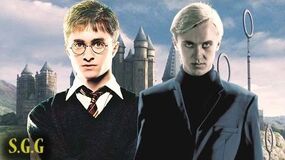 Harry Potter And The Enchantment Of Draco Malfoy? - Drarry 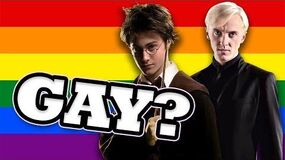 Are They Gay? - Harry Potter and Draco Malfoy (Drarry)