Arthur – “Eames, I am impressed.”
Eames – “Your condescension, as always, is much appreciated, Arthur, thank you.”
— Plans

Dream Husbands is the slash ship between Arthur and Eames from the Inception fandom.

Dom asks where Eames is located and Arthur replies that he's in Mumbasa. Dom tracks down Eames where he tells him that Arthur keeps telling him that Inception in impossible. Eames says that Arthur is good at what he does but lacks imagination.

Back in England the group comes up with the plan for Inception. Eames comes up with the idea of convincing the target that he gave himself the idea. Arthur is impressed, and Eames takes the compliment. Late Eames think the idea that they should give the target is that his father wants him to create for himself. Dom says it might work, Arthur arguing that they need to do better than might, causing Eames to insult him for a lack of contribution. Arthur counters back that they would need more specificity in the idea. Later they need to find a way to wake up from the dream, Dom suggests a kick, prompting Ariadne to ask what a kick is. Eames kicks Arthur chair, causing him to startle and fall slightly forward. He's clearly annoyed at the action. When testing possible serums, Arthur is the test subject as Eames watches, laughing the few times that Arthur is forced to fall out of the chair and wake up.

Inside the dream the group gets into a cab where they are attacked by Fischer's mind, getting shot at. Arthur asks Eames if he's okay, and Eames replies that he's fine. The cab gets away and they hideout in an abandoned warehouse before they have to run. Arthur begins to shoot at some of the men outside, as Eames comes up to him. He tells him to dream bigger as he pulls out a much bigger gun killing most of the men at once. He heads back inside as Arthur watches him.

“Arthur. You still working with that stick in the mud?”
— Eames

“You mustn't be afraid to dream a little bigger, darling.”
— Eames

Those that believe that the ending wasn't a dream, like to write about them being on jobs after the events of the film and ending up together, or in some fanfiction getting back together, afterwards. Some will also explore them retiring from the Inception business, instead having a more legitimate life together post the Fischer job. Non Inception AU's are also popular. Exploring the relationship without dreams being a factor. 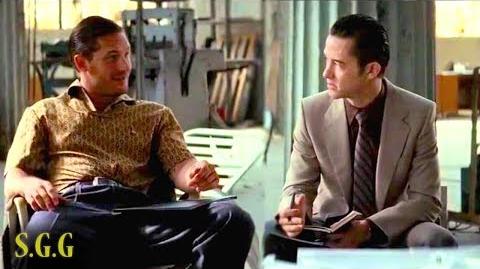