Eden x Catherine is the femslash ship between Eden Starling and Catherine Beadnell from the Barbie fandom.

Eden is a spoiled opera singer who demands their workers work on christmas, which enrages the crew. That's when Catherine tries to reason with her, but Eden remains firm in her decision. That night, she's hunted by the ghost of her aunt Marie, who tells her that she will be visited by the spirits of christmas. Later, as the Phantom of Christmas Past visits her, we get a glimpse of Eden's childhood and the abuse of her aunt. The only time she was truly happy was when she was in the company of Catherine and her family, who welcomed Eden as if she was one of her own, making her feel safe and comforted.

With the ghost of the present, Eden has to confront the reality that even Catherine is getting tired of Catherine's ways, and she wonders what happened to that sweet girl she knew when they were kids. Eden sees Catherine is a truly generous person as she gives the orphans clothes and helps at the orphanage, and she seems very taken with one of the kids, Kelly. Eden is touched by this and has a change of heart. However, overhearing a conversation between the owner and Catherine about the orphanage closing down before spring due to a lack of funding, she shows concern for the orphans' future. When Eden asks the Spirit of Christmas Present what will happen to the orphans if their only home closes down, she becomes more offended when she hears her repeat the cruel words she had originally said to Catherine about them surviving as street urchins and demands they leave at once.

When the Phantom of the Future comes, she shows Eden her most likely outcome: a bleak, joyless life where she has fallen on hard times. And she discovers that Catherine has become not only distant, but also just as selfish and unkind as Eden once was. Eden's whole journey of self-reflection has a lot to do with her relationship with Catherine. Her happiest days were all the ones where she had the freedom to be together with Catherine. And most of her dreadful part of the future is seeing how much they've grown apart. To Eden, Catherine represents everything that can make life worth living, she is family, love and comfort, so when she sees a picture of her, she softly gasps and utters Catherine's name.

Her tragic future comes to be when she cuts Catherine out of her life, causing her friend to lose her spark as well. The only way to remedy that is to rekindle the closeness that they had as kids. So, when Eden returns to her current life, she decides to give her workers a free holiday and takes off with Catherine to spend the holidays with Catherine's family home. At this point, Catherine seems to have decided to adopt Kelly, and the child joins the two women on their holiday retreat.

This ship is not as popular amongst the many femslash ships that the Barbie fandom has. However, it is the most popular fandom of the movie it is from, "Barbie in A Christmas Carol". Many fans love how their entire relationship is key to making the story work. The happiest ending is only achievable if they stick together. And their separation is fated to bring the both of them misery. They care deeply about each other and they're at their best when they remain close. This is the main reason why so many ship them and find them way more legitamate and reasonable than the implied canon couple that wasn't even confirmed by the movie.

Many fans have headcanon that couple adopted Tammy as their own and fanfictions and headcanons usually expand on these idea of the two of them being mothers to Tammy. 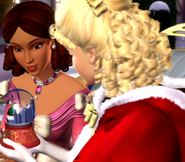