“Tell me this - Why is the sky here that was once so dark glowing again? Why now? …This is your Plane of Euthymia, it's your inner world. So, it can only mean… that you are happy to see me, again. You have found the loneliness here unbearable for a long time now, haven't you?”
— Yae Miko to Ei, "The Omnipresent God"

EiMiko is the femslash ship between Raiden Ei and Yae Miko from the Genshin Impact fandom.

Yae Miko is stated to be an “old friend” of Baal and is one of her most trusted allies. Despite this, she does not support the Archon’s actions. Thus, Miko agrees to help the traveler defeat Baal in order to save her from an eternity of solitude. After the traveler's altercation with the Archon, it is shown that Miko and the latter are quite fond of each other and tease each other frequently.

Yae Miko requests the traveler’s help in her plan to stop the Vision Hunt Decree. She asks them if they met the real Baal, whose name is Raiden Ei. Miko was formerly one of Ei’s followers, similar to what Dvalin is to Venti. She still cares deeply for her friend and wants to not only rid Inazuma of the Fatui, but save Ei in the process. Miko believes the reason Ei has not spoken to her is that the latter wants to eternally preserve their friendship as it was.

Miko enters the Plane of Euthymia and tells Ei that she shouldn’t forget who taught her how to create this space. Together, Miko and the traveler convince Ei to acknowledge the people of Inazuma’s ambitions. After the fight, Miko voices her concerns about Ei’s wellbeing. She tells Ei that the people of Inazuma don’t want the eternity that she is pursuing, and that she should give them her attention instead. Miko says that the loneliness Ei felt over the past five hundred years must have been unbearable. She comments that the environment becoming lighter around them is proof that Ei is happy to see her again. Miko teases Ei that she will have to spend the next several centuries updating her on everything that has happened. Ei laughs and says she never thought they’d meet again like this. She admits that seeing Miko again has been a very nice surprise. Miko asks if that means they are still friends, and Ei lightheartedly calls her childish.

Miko reveals that she traded the Electro gnosis to Scaramouche in exchange for the traveler’s life being spared. When asked why she had the gnosis, Miko replies that Ei entrusted it to her after cutting ties with Celestia. Miko then explains Ei’s past in detail to the traveler.

The Traveler becomes worried about the state of Inazuma and the Shogun's wellbeing after the Vision Hunt Decree is repealed and turns to Yae Miko for help. Miko gives the Traveler her personal Pass Permit to allow them access to Tenshukaku and an audience with the Shogun. A guard outside Tenshukaku is apprehensive at first, believing that Miko would never hand over her Pass Permit to anyone else because the Permit is a symbol of the Shogun's trust.

The Traveler convinces Ei to come out of her Plane of Euthymia and see the modern Inazuma. Ei recalls Miko having talked about her light novel publishing business and requests to visit it.

Ei eventually returns to meditate in the Plane of Euthymia and the Traveler returns to the Grand Narukami Shrine to bring the Pass Permit back to Miko. They relay the events of the afternoon with Miko, who finds amusement in Ei's bewilderment at the modern Inazuma. The Traveler remarks that both Ei and Miko enjoy teasing each other. Miko tells the Traveler that they can freely borrow her Pass Permit to visit Ei, and winks when saying that Ei wouldn't mind their company.

Ei has difficulty fighting the influence of the programmable Shogun on her body, as the Shogun was built to resist any kind of change out of fear of erosion. Ei enters a separate dimension to fight the Shogun over having control of her body and to prove that she is of sound mind. The Traveler hurriedly goes to find Yae Miko and ask for help rescuing Ei.

Miko goes with the Traveler to the entrance of the separate dimension. She states that she can sense Ei's rough whereabouts and can transport the Traveler directly to where Ei is. Before transporting the Traveler inside, Miko states that she is "leaving [her] god in [our] capable hands" and requests that Ei be brought back for her sake and Inazuma's.

After Ei defeats the Shogun and leaves the separate dimension, she and the Traveler relay the events to Miko. Miko asks Ei how she's feeling and Ei responds that she feels physically well again, to which Miko replies that she had actually been asking about Ei's emotional state. Ei teases Miko about rarely hearing comforting words from her, and Miko teases back saying that Ei used to never listen to a word she said. When Paimon remarks that Makoto also said something similar in regards to Ei's stubbornness, Miko playfully questions if such a similarity would qualify her to act as Shogun for a short period, before stating that the position would be too much work.

The Traveler can continue to talk to Ei and Miko after the quest is completed and has a dialogue branch option of telling Ei about the things Miko said before entering the separate dimension ("Yae Miko said she was placing her god--"). If this dialogue branch is chosen, Miko will cut the Traveler off and prevent them from relaying her full words, wanting to keep what she said as a secret. Ei will confusedly ask what they're talking about, and Miko will change the subject by remarking that she suddenly wants fried tofu.

As part of the celebration for this festival in Inazuma, Miko personally oversees the distribution of a new novel titled "Pretty Please, Kitsune Guuji!" published by the Yae Publishing House. The light novel focuses on the relationship between a shrine maiden named "Yae Masako" and "the Raiden Shogun".

The EiMiko ship originated from the fandom’s theories about them. It became fairly popular among fan artists when Inazuma was released. The ship has grown even more after the 2.1 update revealed the truth about their relationship and had significant interactions between them. Currently there are 500+ works of the ship on AO3.

EiMiko is by far the most popular ship for Yae Miko. It is also one of Ei’s two most popular ships, the other being EiSara. Both characters are often read as having one-sided (Sara) or mutual (Miko) crush on Ei. Fans of both pairings interact quite peacefully, in fact, there is also a poly ship with the three of them together EiSaraMiko which in its own has a devoted fanbase.

Due to Miko's rather playful personality and her status as Ei's only friend, this ship is often being read as semi-canon "best friends with a mutual attraction" or even "ex-lovers". This interpretation became especially popular after their final face-to-face conversation at the end of the main Raiden Shogun quest, when many even joked that the Traveler looked like a third wheel in their background. According to the fanfics written based on this headcanon, both girls often go through a difficult path to get back together after a long breakup, or Yae often acts as the person who helps Ei get out of the shell and become more sociable.

Additionally, they both have Honkai Impact counterparts, which has made them popular among Honkai fans.

The release of the light novel "Pretty Please, Kitsune Guuji?" in Version 2.6 has led to a number of theories for this ship:

“Ah, that girl... She used to be the kind of person who could easily be swayed with some Fried Tofu. It's a relief to see how shrewd and resourceful she's now become. Still, I have to admit that I was a little upset to become the target of her scheming myself. I know it was for my own good, but I'm afraid she will mock me next time we meet... Perhaps I should take the initiative and strike her first? Hmm, she'll dodge it anyway.”
— Ei's voiceline, "About: Yae Miko"

“Tell me this - Why is the sky here that was once so dark glowing again? Why now? …This is your Plane of Euthymia, it's your inner world. So, it can only mean… that you are happy to see me, again. You have found the loneliness here unbearable for a long time now, haven't you?”
— Yae Miko to Ei, "The Omnipresent God"

“Seeing you again is a change to eternity…and a very nice surprise.”
— Ei to Miko, "The Omnipresent God"

“I'm placing my god in your capable hands. For my sake, and for Inazuma's, please... bring her back.”
— Yae Miko to the Traveler, "Transient Dreams"

“I assume you forgot whose birthday it is today, little one? Yes, that's right! Today, we will celebrate the birthday of... the Almighty Raiden Shogun.
Our Almighty Shogun meditated for a long time and racked her brains out to think of what to write to you, but she didn't find any inspiration in the end. As Eternity's servant and friend, I am of course, obliged, to write this letter on her behalf... and invite you to see her.
Here, take this dessert. When you see her, just wish her happy birthday. Nothing more, nothing less. You understand, little one?”

— Ei's birthday letter, written by Miko and given to the Traveler

Chibi Ei and Miko in the The special program for Genshin Impact's 2.5 version. 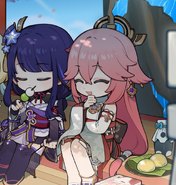 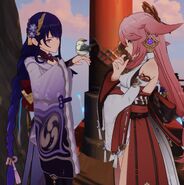 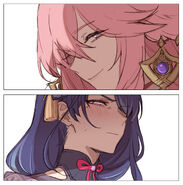 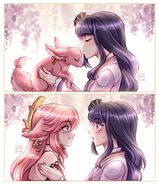 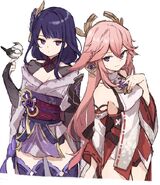 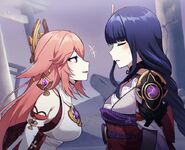