Electromagnetism is the femslash ship between Pyrrha Nikos and Nora Valkyrie from the RWBY fandom.

In Chapter 8 "Players and Pieces", Jaune picks the white knight piece meaning that Pyrrha and Nora (as well as himself and Ren) will be placed on the same team. A short time later, they fight the deathstalker together with the rest of their team. During the fight, at Jaune's direction, Pyrrha uses her shield to cut off the deathstalkers stinger and then they do a combo attack where Nora launches off Pyrrha's shield into the air and nails the stinger into the deathstalker. In Chapter 11, "Jaunedice", Nora offers to break Cardin's legs to stop Cardin from bullying Jaune and in the very next Chapter, "Jaunedice Part 2", Pyrrha repeats the offer. In an extra scene on the DVD version of "Forever Fall Part I", Nora eats the red tree sap right out of Pyrrha's jar, much to Pyrrha's irritation.

In the volume premiere, "Best Day Ever", Pyrrha and Nora both participate in the food fight between team RWBY and team JNPR, and are the two of their team still standing when Ruby lanches her final attack. During the dance arc, after Pyrrha encourages Jaune to go tell Weiss how he really feels about her and after he leaves, Nora softly tells the depressed Pyrrha that she should practice what she preaches. In Chapter 7 "Dance Dance Infiltration", Pyrrha and Nora participate in a team dance with Jaune and Ren.

In the volume premiere, "Round One", team RWBY meet up with team JNPR and Pyrrha buys them all a meal. After they eat, Nora lists the fact that Pyrrha is a world renowned fighter as a reason they are ready for their fight and when Nora panic and spirals, Pyrrha puts her hand on Nora's back to comfort her. In Chapter 2 "New Challengers", during team JNPR's tournament fight, May Zedong aims her shot at Nora, so Pyrrha jump off Jaune's shield into the air and uses her own shield to block May's shot. When the team stops in the middle of the fight to discuss team attack names, Nora teasingly points out that there was hesitation in Pyrrha's voice when she said the name for team her's and Jaune's team attack name (Arkos) was good.

In Chapter 8 "Destiny", after team RWBY wish Pyrrha, Nora changes into her exercising outfit and tries to get Pyrrha pumped up to work out, telling Pyrrha that she needs to be in shape for what could be the most important fight of her life. When Ren offers Pyrrha a green protein drink that was made with algae, Nora tries it first and vomits, making Pyrrha smile for a moment. Despite Ren's insistence that that nothing was wrong with the drink, Nora tells Ren that they should be helping her, not trying to poison her. Later when Jaune is trying to talk to Pyrrha alone, she pulls Ren away to give them their space. She is then seen in the audience of Pyrrha's fight, super excited to watch.

In Chapter 8 "Destiny", Nora is taken aback by the Pyrrha's memorial statute. She then tell Jaune that she and Ren love him just like they loved Pyrrha and they all promise to fight to save the world despite how bleak the situation is.

Electromagnetism is a rare pair in the RWBY fandom. It's typically more popular as part of the poly ship Juniper Berries. Otherwise it is more often ignored as both Arkos and ReNora completely eclipse it and most other ships involving the two in popularity. However, it's not without its fans and it did get more popular after they share more screen time together in volume 3 and RWBY chibi. The ship has 73 works on AO3. 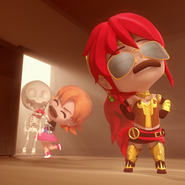 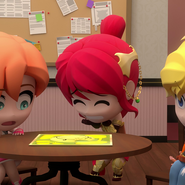 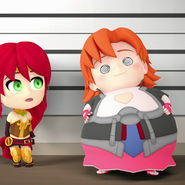