Elina – “But what if my true self doesn't have wings?”
Nori – “Would that be so horrible? You'd be you! Smart and brave, and everything that makes you special.”

Elina x Nori is the femslash ship between Elina and Nori from the Barbie fandom.

When Elina's friend, Prince Nalu, is kidnapped by Laverna's minions, Elina goes on a quest to find him. On her way there, she meets Nori when the sea-butterfly fairy that guided her there tells Elina about Nori. Elina quickly goes to meet her to ask for her help. Upon first meeting Elina, the first thing Nori does is call her beautiful. But she also starts acting snarky at Elina, not believing she was really sent to look for Nalu, since she thought he wasn't lost.

Elina moves forward with her search, alongside Bibble and the new friends she made along the way, although not with Nori's help. As for Nori, she starts suspecting Elina's words might've been true and starts looking for Nalu as well. Elina and her meet again and they start a back-and-forth because Nori refuses Elina's help. However, she later realises that she might actually need Elinas help since the only people who know the location of Delphine are the merfairies, who are too childlike to take any situation seriously and so are nearly impossible to speak with. Merfairies do settle down enough to converse with when entertaining guests in their above-water homes, however, so Elina can visit them and convince the merfairies to give her the location.

Having proven her usefulness to Nori, the mermaid reluctantly agrees to let Elina accompany her - “as long as you can keep up with me.” Elina is still incredibly determined to help Nori. Nori easily out-swims Elina, but Elina takes to the air and skims along just above the waves to make the race more even. The two reach Delphine together, and Elina impresses Nori with her flying, prompting her to finally begin dropping some of her hostility. The two of them ask her for Nalu’s location, but Delphine won’t tell them directly, saying they first have to prove themselves by a series of challenges in the Depths of Despair.

The Depths of Despair is a dark vertical shaft on the ocean floor. The two of them begin swimming downward. Nori swims downward with no problems, but Elina cannot progress against the powerful currents flowing up through the shaft. Nori presses onward, telling Elina to wait for her, but is soon entrapped by the fronds of one of the hostile sea plants growing on the shaft’s walls and starts yelling to Elina for help. Elina tries to swim to her but still can’t reach her to rescue her due to the currents still pushing her back up, and thus, she is forced to activate the necklace, after all, turning her into a mermaid. She had to give up her newly obtained wings just so she could save Nori.

The two of them manage to save Prince Nalu after many challenges, but the seeming defeat is soon partly reversed, when Nori reveals that she and Elina had swapped the Immunity Berry during the heat of the chase with a similar-looking substitute - one of the berries that reveals the eater’s true self which they somehow painted a red stripe onto to make it look exactly like the Immunity Berry. Elina then decides to risk eating one of the true-self berries herself in the hopes of restoring herself to fairy form. Although she is incredibly insecure about doing so in fear of losing her wings forever. In that moment, Nori encourages telling her that if she does, she'd be her true self, she'd still be the smart and brave person she already is. Ellina succeeds thanks to Nori's words, gaining wings even more spectacular than the ones she had before.

This ship is one of the most popular within the Barbie fandom. Although it is not as popular as other ships such as Liana x Alexa or Barbie x Ken, it is the most popular ship of the movie it is from, "Barbie Fairytopia: Mermaidia". Most people started shipping them because they spend most of the movie together, and because of their incredible chemistry. Fans of the ship love their fanon "Enemies to Lovers" dynamic, and how flirty both Nori and Elina are throughout the movie. Also, how both of them are willing to risk their lives when the other is in danger. However, some people don't think this ship has much romantic potential for them to be in love since although they think they could've developed a crush on one another, they argue that Elina was already in love with Dandelion, who she came back to at the end of the movie, and who she was already close with in past movies as well. 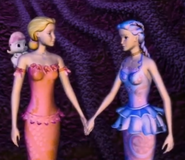 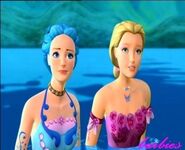