Elsamaren is the femslash ship between Elsa and Honeymaren from the Frozen fandom.

Because of the actions Elsa's grandfather committed towards the Northuldra, there have been bad blood between the people of Arendelle and the Enchanted Forest. This is why Honeymaren and her group were cold and wary towards Elsa and her party when they encountered them in magical forest. Honeymaren was also surprised to learn that Elsa has powers when she used them to stop her group and the trapped Arendelle gruads from fighting one another, despite being told that the Northuldra were the ones who attacked first in her father's stroy she doesn't want the fighting between their two people to continue. Elsa wanting to free the Enchanted Forest from its curse and Honeymaren seeing Elsa tame their small angry fire spirit has her quickly warming up to the young queen. Along with the two learning that Elsa's late mother was a member of the Northuldra, as it allows both Elsa and Anna to be weclomed among Honeymaren's people. Later in the evening, Elsa and Honeymaren sit by a campfire and talk about the days events. As Elsa sings a part of "All of Found" she and Honeymaren joke about how all lullabies have some kind of terrible warning in them. Honeymaren then asks to see the shawl Elsa has with her, which belonged to Queen Iduna, and explains what the symbols on it mean.

Elsa's mission to find the voice that has been calling her and the brief encounter with the passing Earth Giants, however, has Elsa leaving Honeymaren's side, while Honeymaren and her tribe seek to find a safter place away from the angry spirits. Their brief time together at the camp fire has Elsa believing that the voice she's been hearing is from the fifth spirit that Honeymaren told her of. Until Elsa later learns that she is the fifth spirit. After the mist trapping the Enchanted Forest has been lifted, Honeymaren suggests that Elsa should stay with the Northuldra which Elsa agrees with. As she feels that she belongs there and it would allow her to be with the four elemental spirits, since she is now the fifth spirit of ice. After Elsa receives a letter from Anna and goes for a ride on the Nokk, Elsa passes Honeymaren while she and her brother were rounding up their reindeer, and both women wave to each other.

In the run up to Frozen II's release, there were rumors of Honeymaren possibly becoming Elsa's girlfriend, though many were skeptical of such rumors. These rumors are believed to have been started from the storybook illustration of the two sitting beside each other by the fire, while Elsa shows Honeymaren her late mother's shawl. Much of the discussion played-out in the #GiveElsaAGirlfriend hashtag which first became popular in 2016. Once Frozen II was released, shippers quickly flocked to the Elsamaren and while some where disappointed that it did not become a canon ship, others were still happy with the friendship shown between the two and hoped to see more of them in future shorts or another Frozen movie. Since Frozen II's release, the number of Elsamaren fictions quickly rose and at least in AO3, surpassed both Jelsa and Helsa as the most popular pairing, only being exceeded by the official Kristanna and Elsanna. As well as people beinging to ship Elsamaren beside Kristanna from time to time.

A few fans have even began to rival Elsamaren with the Frozen/Rise of the Guardians crossover het ship, Jelsa. Because of what happened between Anna and Hans in the first film, some have Anna friendly teasing Elsa's relationship or feelings for Honeymaren, by telling Elsa that she can't marry a girl she just met in their fanfic and artwork, for a laugh and to have a fun way to reference the lines that Elsa had once told Anna. Along with many featuring Honeymaren riding on the Nokk's back with Elsa in their fan-made work. There have also been those who have Elsa wearing the tribal clothing of Honeymaren's people, since Elsa's is half Northuldra and with fans seeing Honeymaren helping Elsa to understand their way of life. While the AU that has Elsa's parents deciding to live the forest has the women growing up as friends. Along with the bad blood between their two people and Elsa wanting to bring peace between them and their forest home has inspired a few fans to place them in a Princess Mononoke AU.

Just as AO3 has a large number of fanfics on the Frozen ship, it also has a large fanbase on Tumblr, along with Elsamaren having a fan group on DeviantArt. YouTube even has many music, clip and comic videos on the ship. Rydoff also being a Frozen II added ship to the Frozen fandom sometimes has it being mixed in with the Elsamaren posts on Tumblr, along with shippig the two ships beside one another from time to time. While those who support both Elsamaren and Helsa began to ploy ship the three together, along with it creating a het ship between Hans x Honeymaren. Elsamaren being one of the fast raising Disney feslash ships has fans shiping them beside other similar Disney ships, like Cassunzel, Elenaomi and Rayaari, as well as placing Elsamaren in groups of Non/Disney pride ship from time to time. In 2020, Elsamaren ranked as the 76th top ship. 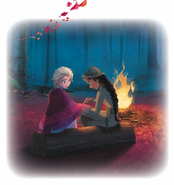 Helsamaren refers to the ship between Hans, Elsa and Honeymaren