“Elsa: You sacrificed yourself for me?
Anna: I love you.”

Elsanna is the family ship between Elsa and Anna from the Frozen and Once Upon A Time fandoms.

As children, Elsa and Anna were very close and they enjoyed having fun in the ice and snow that Elsa creates with the magical ability she was born with, up until Elsa had accidentally struck Anna in the head with her ice magic when she slipped on her own ice while trying to create a pile of snow for her sister to land on, as Anna had gotten too caught up in the fun they were having and it caused young Elsa to worry as she tried to tell Anna to slow down as older sister tried to keep up with her while making sure that she'll have a soft pile of snow to break her fall. After young Elsa realized what she had done, she called for her parents, the King and Queen of Arendelle, for help and they brought their daughters to rock-like trolls that would be able to help both girls. The elderly ruler of the trolls, Grand Pabbie used his magic to cure the youngest princess by cleansing out every ounce of magic within her before altering her memories so she won't remember Elsa's powers, all while leaving the fun that they had in those moments. Afterward, Pabbie informs Elsa that it was crucial for her to learn control over her abilities, as he warns her that the dangers of her powers would make fear her enemy. In response, Agnarr assures Pabbie that he and Iduna will do whatever they can to keep Elsa's powers from harming those around her, including Anna; and because of her altered and erased memories of Elsa's magic Anna was left wondering why Elsa shut herself away from her and the world outside her new enclosed room.

After that, and during the passing years as the sisters grew, Anna tries to reach out to Elsa by asking her if she "wants to build a snowman" or any other kinds of fun activities they could do together. Elsa's growing fears of her own powers and harming anyone with them again, however, kept Elsa from opening her door to Anna. No matter how much Elsa misses her sister's company and the fun times they had. When their parents died at sea, Anna tells Elsa through her closed door that they only have each other know all while begging her to open her door during that hard difficult time of loss, even though Elsa had heard Anna and would want more than anything to be with her sister again, she couldn't find the courage that would have helped Elsa to finally open her door to Anna.

After years of being separated from each other, Elsa is determined to make Anna's eighteenth birthday the best one ever, as a way to make up for the ones she had missed.

When the sisters came to the conclusion that they don't have a family tradition, due to the long years where Elsa kept herself away from Anna, Elsa apologized to her sister for being the reason that they don't have one. As Elsa went to talk about it again with Anna and wasn't in her room when he did, Elsa finds her sister in the castle's attic while she is looking for anything that would help them to uncover what their holiday tradition is, but had ended up going through the trunk that contains her childhood belongings. After Anna shows Elsa her treasured childhood items, they begin to look through Elsa's trunk in which contains many piers of Elsa's old gloves that she grew out of and her childhood toy who was her only friend and confidant that she could share her secrets with in her lonely room, Sir Jorgenbjorgen. As Elsa places him back into the trunk Anna asks Elsa about the small chest box that she placed her childhood toy on top of, Elsa hands it over to Anna and has she opens it she finds their tradition. The sisters share their discovery with Olaf as they tell him that he is their tradition, as after the two were separated from each other within the castle young Anna would make Elsa a gif that takes the form of the snowman they made together; as the years went by from that time Anna's made gifs always brought a smile upon Elsa's face while Elsa became exited when they are pushed under her door so she could receive them. As their tradition reminds the sisters that while a closed door keeps them apart they still care about each other.

The prologue of the second film begins with a moment of Elsa and Anna's childhood, before the incident that separated them, as Elsa uses her magic to create the ice made landscape and figures for Anna as they play "Enchanted Forest" before their parents come to get the two ready for bed. Hearing the name of their game and what they have in their Enchanted Forest, Agnarr decides to tell his daughters about a real Enchanted Forest he had been to in his youth, while Elsa and Anna enjoyed hearing about the four elemental spirits that live beside a tribe of none magical people, the Northuldra, they were surprize to learn that the Northuldra had attacked the people who had gave them a gift. After the two ask their mother that question, Iduna tells them about a magical river that holds the answers of the past before she sings them the lullaby of Ahtohallan.

Three years after the events of the first film, Elsa and Anna join their people as Arendelle hosts its harvest festival. While things have changed for the better, Anna hopes that she and Elsa will never be apart again, Elsa on the other hand was worried that she might mess things up again even though Anna tells her that she wouldn't and should stop worrying. Later that night the sisters and their friends that they call their family, as it is made out of Kristoff, Olaf and Sven, play a round of charades and when it was Elsa's turn while Anna guesses in a girls vs, boys round, Elsa hears a voice that only she could hear of late. After the voice threw her off and had trouble giving Anna clues, Elsa turns in early before Anna goes to see her older sister. Once Anna saw Elsa rapping herself in their late mother's shawl she could tell that something is wrong, but Elsa choice to not tell Anna about the voice and instead tells Anna something else that has been bothering her of late. Anna later gets Elsa to scooch up to her on the bed before she begins to sing All is Found, as the sister fall asleep next to each other.

While Elsa and Anna are sisters, there have been fans who treat Elsanna as a femslash ship; for when they feature them as non-sisters or ship them as incest. Just as there are those who strongly prefer to keep Elsanna as a family ship, and hate pairing them romantically due to them being siblings in canon.

Even though Disney and Once Upon A Time have their own versions of the two sisters, their ship in both fandoms are of the same name and both the Disney film and the live-action TV series shows the sisters' love for each other. As well as struggles that would hinder their bond before it becomes stronger.

Elsa and Anna are often included in the expanded Rise of the Brave Tangled Frozen Dragon fandom, and are included in many AU scenarios. One popular AU involving the two is the Wicked AU, with Elsa as Elphaba (as Idina Menzel both voiced Elsa and played Elphaba) and Anna as either Nessarose (Elphaba's younger sister) or Glinda. As just a Disney Fairies AU commonly has Elsa and Anna as Periwinkle and Tinker Bell; and vice versa with Periwinkle and Tinkerbell as Elsa and Anna in a Frozen AU. Whenever they are featured in a Pokémon AU together, they are commonly given Eeveelution Pokémon as their partners since Elsa is commonly given a Glacion while Anna's is between a Leafeon and Sylveon. Along with them having a Vulpix in their teams, an Alolan Vulpix for Elsa and a normal form Vulpix for Anna. 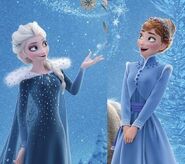 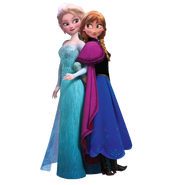 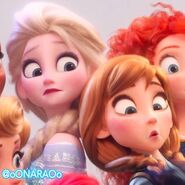 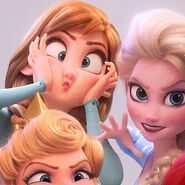 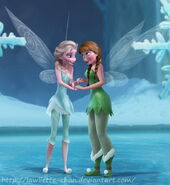 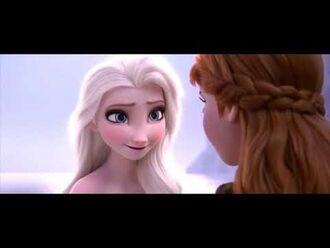