Elswinkle is the femslash ship between Periwinkle and Elsa from the Disney fandom.

As Elsa and Periwinkle are from different series, they have never met. Even though a few Disney crossover video games could have them cross paths with each other or added in the same team, by player choice.

Elsa and Peri are both capable of doing ice-related magic, as well as both of them having an non-magic sister that they are care about, but were forced to be kept away from. When their sisters gotten hurt, with one of Tink's wings being half torn while Anna became frozen in ice from her frozen heart injury, Peri and Elsa's used the love they have for their female siblings to heal them. In the end the two are finally able to be with Anna and Tink and are seen having some fun with them next to the ice.

Since Peri is a fairy from the world of Pixie Hollow she gets along with animals, while Elsa being a Disney Queen who is viewed as a Disney Princess, she too can easily befriend animals. As Peri had watched a group of animals crossing into the Winter Woods with her Winder-Animal Talent fairy friend, along with Elsa being very fond of Sven, the shy salamander Bruni and forming a bond with the Nokk from Frozen II. As a Frost-Talent Fairy, Periwinkle uses her magical abilities to bring winter to the main land, just as Elsa had brought an earlier winter to Arendelle, even though her first self made winter was accidental and didn't bring joy to her people, until she revered it and created a smaller and summer-winter balance in the castle's courtyard, so they could have some earlier winter fun together. At the end of Frozen II, Elsa becomes the fifth elemental sprit of ice and begins to live with the other four spirits. Peri's home Disney world also has fairies that are capable of doing other kinds of elemental magic, that live in harmony with the other winter fairies.

Elsa and Peri are two of the main members in the Secret of the Incredible Frozen Guardians crossover fandom, with Jack Frost from Rise of the Guardians and Frozone from The Incredibles. While the exact origins of the ship is a mystery, it could simply be due to both Disney characters being able to do ice related magic. Along with a few similarities and traits between them, and have on occasions been portrayed as one another by fans for a Frozen AU and a Disney Fairies AU. Based upon the similar traits between the two and their sisters, as they portray Elsa as Periwinkle and vice versa. The same with their sisters, for when they are cast as the "two" and the other together.

Some fans have Elsa meeting Periwinkle as a child and become friends with each other, from their times together in fanon Peri keeps Elsa company each winter and helps her to master her ice powers. There have also been fans who have the Disney Queen as a mother-like figure to the Frost-Talent Fairy, or have Elsa's first baby laugh replace the very laugh that gave birth to Peri and Tink. Along with there being fans who have Elswinkle rival with Jeriwinkle, or ship all three ice wielding characters together as a polyship or a familyship.

While the ship itself isn't very popular on a few fanbase sites, like Fanfiction.net and Tumblr, it still has a few supporters. Then though AO3 only has one fanfic on the ship and Fanfiction.net only has three.

Elsa and Periwinkle posts on Tumblr 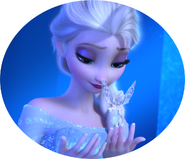 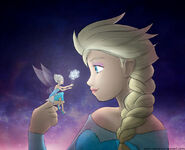 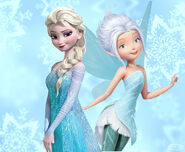