Emberald is the femslash ship between Cinder Fall and Emerald Sustrai from the RWBY fandom.

Emerald is revealed to be Cinder's subordinate and is shown to be loyal to her to a fault.

After Cinder appears in chapter 1, she blantly walks past Emerald and ignoring her attempt at a hug. She then scolds her for not listening to her orders. Emerald then apologizes saying it won't happen again. She seems to greatly value Cinder's approval. Her Emerald and Mercury are then seen infiltrating Beacon as students from Haven.

In volume 3 Cinder, Mercury and Emerald all set their fall of Beacon plan in motion. Emerald takes part in framing Yang for hurting Mercury and then framing Pyrrha for killing Penny. She also pretends to be a part of Cinder's team alongside Mercury and Neopolitan. We then also find out in a flashback episode that the reason why Emerald is so loyal to Cinder is because she "saved" her from a life on the streets. It was also shown in that episode that Cinder abuses Emerald quite frequently, as when Emerald initially protested Mercury's recruitment Cinder slaps her across the face.

In volume 4, it is revealed that Cinder has lost her arm, eye and her voice. Because of this Emerald acts as her "voice" for most of the season as Cinder is shown unable to speak in more than a hoarse whisper. She also is by her side for almost the entire volume. Emerald also helps Cinder train by conjuring up images of Ruby that Cinder then destroys.

Emerald travels with Cinder to form an alliance with Raven Branwen. They are then shown at Haven Academy ready to fight the main characters. In Emerald's fight with Ruby she admits to her that she doesn't care about Salem and that she owed Cinder everything. Near the end of the volume Emerald yells that the fight wasn't over and that Cinder would ome back. Once it was revealed that Cinder didn't return Emerald assumes she died and she collapses to the floor crying. She then screams out in pain and uses her hallucination semblance on 9 people. This causes her to faint from overstrenuating herself.

In chapter 1, Emerald was happy to see Cinder return to them and attempted to excitedly greet her and express her faith that she would come back only to be saddened and stop in her tracks when Cinder harshly tells her to be quiet. In chapter 5 despite their time apart and Cinder's own disrespectful tone to her during their Reunion, Emerald is still shown to still care for her and is still strongly devoted to Cinder. When Neo initially refused to go along with Cinder, Emerald jumped at the opportunity to help her get the winter maiden powers. After Cinder failed to get them and fell unconscious, Emerald frantically ran to her to see if she was alright. She then started to cry and threatened Penny if she came anywhere near them. She then managed to escape with her and Neo. In the next episode Emerald was shown to nurse Cinder back to health and didn't leave her side until she woke up.

Emberald was a popular ship in the early volumes of RWBY, since it was glaringly obvious that Emerald cared for Cinder and looked up to her. It waned in popularity as the volumes went on as it became obvious to the audience and even some of the characters in the show that Cinder doesn't care about anyone or anything except herself. This was not helped by the fact that Cinder has been shown to be abusive towards Emerald, and that Volume 6 and RWBY Chibi both reveal that Emerald actually sees Cinder as a surrogate mother. Nevertheless, it still has a small fanbase. 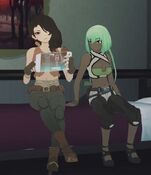