“Endeavor! You see, I... I've always been watching you, so I know. There wasn't a single person who was seriously trying to surpass him... other than you. You were the only one. I'll add my speed to your firepower! I'll give you the push on the back you need, Number One! ”
— Keigo Takami, Chapter 189

EndHawks is the slash ship between Enji "Endeavor" Todoroki and Keigo "Hawks" Takami from the My Hero Academia fandom.

Enji and Hawks are both top ranking heroes, Number One and Number Two respectively, and their relationship centers around their job and their perception of each other as heroes. On the surface, this relationship may seem like it consists of Hawks pushing Enji's buttons and irritating him for his own amusement, and Enji lashing out in response, providing comedic moments to both characters, especially the usually dour and intimidating Endeavor. However, the understanding and connection between these two characters runs much deeper, as evidenced in the Pro Hero Arc and the Endeavor Agency Arc.

At the start of Pro Hero Arc (Chapters 184-192) a press-conference for the new Top 10 of the JP Hero Billboard Chart is held. Hawks, for whom this is the first on-screen appearance in manga, is restless and dismissive during his fellow colleagues' acceptance speeches, and even cuts Edgeshot's speech short. When given the opportunity to make his own speech, he criticizes fellow heroes' subdued attitude and highlights the importance of the public opinion in the new post-All Might hero era, demanding heroes act bolder and more straightforward. He boasts about his own high ranking, which he has achieved faster than any other hero in history, and high approval rating second only to those of Best Jeanist. Hawks then passes the mic on to Enji, with a teasing line picking on Endeavor's lower approval rating. Instead of rising to an obvious bait onstage, Enji addresses the public in a curt and concise manner, asking them to "just watch him". While the attending audience is surprised by the short speech, Hawks applauds with a smile on his face.

Backstage, Enji grabs Hawks by the collar and demands explanation of his behavior onstage. Hawks explains that while he is not a fan of All Might, he recognizes the importance of a reliable number one hero's presence, and says that he was relieved that Endeavor "was cool". When questioned by Enji whether he is looking to become a reliable leader himself, Hawks laughs and answers that he has no such ambition and would prefer to operate on a lower rank level, much to the proud and ambitious Enji's dismay. Enji prepares to leave, ordering Hawks to apologize to the other heroes whom he insulted with his attitude, but hawks stops him and requests a team-up, mentioning the threat of modified humans Nomu.

Enji accepts the request, and in Chapter 188 Enji and Hawks are already in Hawks' territory in Kyushu, headed to have lunch and discuss Hawks' intel. As they walk the street, Hawks apprehends a flasher, saves a dog from being ran over, helps an old lady to carry her luggage, all the while enjoying attention and adoration from the people on the streets. Hawks is friendly and approachable, which is contrasted with Enji's reputation as a hero with a fierce and unfriendly presence. When Enji attempts to approach one of his fans, the boy rans away in shock, screaming that Endeavor never does fanservice and that's exactly his appeal as a hero.

In the restaurant, Hawks is greatly amused by Endeavor's mishap with his fan, and chats idly about having considered inviting Enji's son, Shoto Todoroki, to intern at Hawks' office but later choosing Fumikage Tokoyami instead. Enji demands a clarification on the rumors about Nomu, to which Hawks replies that he has no proof that these rumors have anything behind them. Enraged at having wasted his time, Enji asks for a check ready to leave, but Hawks stops him and persuades him to consider the widespread and consistent nature of the rumors as evidence itself. Hawks reiterates his position regarding hero work: he wants Endeavor the Number One hero to become a symbol people can rely on. When that happens and the peace is achieved, Hawks believes he will be able to do mundane and safe hero work and relax at home – that is the fate he wants for any hero. Enji looks compelled by Hawks' speech, but seconds later their lunch is interrupted by an attack of a new and improved Nomu, High-End.

At the start of the fight, Hawks and Endeavor work together to halt High-End's attack and ensure the safety of the people in the building. High-End slices off the top of the building, but Endeavor manages to vaporize the falling parts so that there isn't substantial damage from debris, and Hawks uses his feathers to get all civilians to the ground. Hawks is surprised that Endeavor can fly to which Endeavor responds that he considers it "not falling". They continue bantering and fighting together until they have to separate – one of High-End's many quirks allows him to create more, weaker Nomus, which Hawks engages in battle while Endeavor fights the main opponent High-End.

After a devastating battle, the city block is leveled and Endeavor is seriously injured, High-End's protruding tendrils having sliced into his side and across his face. The people in the area are fleeing in panic. However, through sheer force of will, Endeavor manages to get himself up and enter the battle again, while the crowd is encouraged to believe in the heroes by the Endeavor fan from earlier. Endeavor pursues High-End, and is joined by Hawks who had defeated all the secondary Nomus.

Hawks' inner monologue reveals exactly why Hawks is hopeful that Endeavor becomes the true Number One and a reliable figure for the public. Turns out, Hawks has always been watching Endeavor the hero working under the overwhelming shadow of All Might, and while everyone else had abandoned the ambition of even trying to catch up and surpass All Might, Endeavor continued his effort. Hawks' mental image shows a deep and wide gap between All Might and Endeavor's younger, then older figure on the other side, trying to breach the gap with some stones and planks. While shadowy figure shout discouragement at Endeavor, he continues in his stubborn and useless plight, and a figure of young child Hawks, then current time Hawks watches him.

In real time, Hawks pins a great number of his feathers to Endeavor's back, propelling him forward and combining Endeavor's raw physical power with his own speed. Endeavor punches High-End, shattering his face guard, but it's not enough to defeat him. Hawks notes that all of his feathers will turn to ash at this rate, and Endeavor commands Hawks to raise him further up, above the buildings and the people for his final move. With nothing to stand in his way, Endeavor uses a finishing move while shouting "Plus Ultra" noting he always hated his old school's motto, to destroy High End for good. Endeavor emerges from the destruction and strikes a pose, similar to All Might's to show he is victorious. The crowds on the scene and various spectators across the country, notably Enji's son Shouto, celebrate Endeavor's victory. Endeavor is unsteady on his feet and Hawks rushes over to support him. They sit down in the middle of the street and Hawks offers Endeavor a towel to press over his face wound. Endeavor is unsatisfied with his first fight as the Number One hero, noting that he's "got off to a pretty horrible start". Hawks, however, insists that this fight will have massive significance. They are about to seek medical help when they are interrupted by the appearance of Dabi.

Endeavor's vision is impaired due to his face wound and he can't see Dabi very well, although he recognizes him as the murderer of a fellow pro hero. Both Hawks and Endeavor are exhausted from the fight with High End, but Hawks' recalls one of his longer flight feathers, which he uses as katanas, and prepares to fight to protect Endeavor. It proves unnecessary however, when the Number Five pro hero, Miruko, arrives at the scene. Dabi realizes he can't take her on and escapes, calling out Endeavor's full name as he does. Endeavor loses conciseness due to the severity of his wounds.

Soon thereafter it's revealed that Hawks has been working as a double agent under the orders from the Hero Public Safety Commission to infiltrated and spy on the League of villains. Meeting with Dabi in an alley in the aftermath of the High-End battle, Hawks demands to know why the High-End attack wasn't set off on a factory, like he and Dabi had agreed on, but in the middle of the city. Dabi in turn expresses his doubt of Hawks' loyalty to the League, as he had brought Endeavor to the scene of the battle instead of a less powerful hero, and saved the civilians during the battle. Dabi refuses to set up Hawks' meeting with Shigaraki just yet, but promises to be in touch. Hawks walks back with a heavy heart, and when he visits Enji in the hospital he thinks about how sorry he is, as he smiles at Enji's bandaged face.

Enji receives medical help for his wounds, including a healing kiss from Recovery Girl, and is set to return to his city two days later. The battle has left him with a long ragged scar across the left side of his face, starting at his hairline and ending at his lower lip. Hawks sees Enji off to the train station, apologizing for the reasons he can't let Enji know. Enji refuses his apologies saying that his failures are his own. He also expresses his suspicions regarding the timing and location of High End's attack, which Hawks quickly deflects. Enji then advices Hawks to seek support from other heroes if he is planning to continue his investigation into Nomu activity, and Hawks is delighted by his concern, which Enji denies immediately. They wave each other goodbye.

During his time spent infiltrating the Paranormal Liberation Front, Hawks gets listening devices implanted on him preventing him from warning the heroes about the Front's plan. To work around it, Hawks hides clues in Destro's autobiography and finds Enji fighting villains with his interns, in which he gives the autobiography to and purposely contradicts his previous self in the hopes that Enji would catch on to his message. As Hawks flies away, he wonders if Enji will get his hints and warn the heroes.

Back at his office, Enji mulls over Hawks' strange behavior and thinking back to all of their previous experience with each other, figures out what Hawks was trying to tell him. This leads to Enji leading an attack on Garaki's hospital and his noumus.

“You're the type of person who speaks your heart, while acting like you're joking. At the very least, whenever you were with me, you'd always be joking around.”
— Enji Todoroki, Chapter 245

“Can I be like Him? Can I be a hero who beasts the bad guy? Just like how I was saved... Can I be a shinning light for everyone”
— Child Keigo Takami, Chapter 267

The first spark of EndHawks showed up the first time Hawks' was introduced, with many fans saying that the lunch that Endeavor and Hawks were having together right before High-End showed up was like a date. The spark grew and eventually gained popularity following Endeavor's brutal fight against High-End, after which the two begin working together more often. 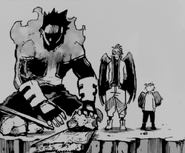 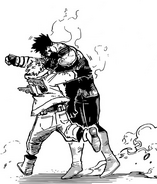 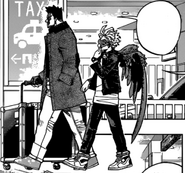 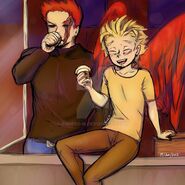 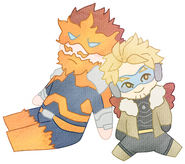 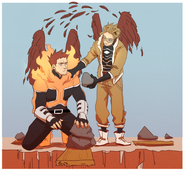