EnjiRei is the het ship between Enji Todoroki and Rei Todoroki from the My Hero Academia fandom.

Enji bought Rei’s relatives in hopes to make a powerful child that could defeat All Might and become the number one hero. It appears Rei did not hold this against him.

After their first child, Toya was born with a Quirk that is far powerful than Enji's and he was satisfied Toya, Rei manages to convince Enji to have more children to help their son form bonds. When their four child and youngest son, Shoto turns five and develops his quirk, Enji decided that Shoto will be his successor instead of Toya. In order for Shoto to be his successor he decided to train him rigorously to the point of Shoto getting sick. Rei tried to defend her son from Enji arguing that “he’s only five.” Enji slaps Rei in retaliation knocking her away.

Their relationship is implied to only have gone downhill driving Rei to the point of insanity.

Rei is seen on a call with her mother telling her that she can’t live there anymore and that the children look more and more like him everyday. Shoto walks up to the doorway and called to his mother scaring her. Thinking she had to defend herself she threw a kettle of boiling water on him. Realizing her mistake she tried to cool his face down with her ice causing a larger burn mark. Enji sends her off to a Mental Hospital because she hurt his masterpiece. Rei's condition got worse once she learned that their eldest son had died.

Years later, she is seen with her son and daughter, Natsuo and Fuyumi, at the mental hospital. Natsuo brings up how “he” (implying Enji) is now the number one hero. Rei senses his negativity and tells him about the flower on her window sill. She had only mentioned once that she liked the flower but Enji had remembered and dropped it off for her. Not face to face of course, since Rei was still frightened of Enji and the doctors thought it best that they don't put the two in the same room together. Until she is ready to see him. She says that although he may not look like it but he is regretting the things he did to his family, and that he wants to make amends. As he had made many other visit attempts to see Rei and even though her doctor kept the two apart, for the sake of Rei's recovery, they still inform her that Enji had came over to see.

Later on in the manga, Enji reveals that he is having a house built for the rest of his family so that they could live happily without him. Due to the dream he has been having of Rei smiling and laughing with their children at the dinner table, while he is absent from it. Because of this Enji believes that the dream is telling him that if he truly wants to make Rei and their children happy, he'll need to keep his distance away from them.

In the War arc, Enji and Rei learn the shocking truth that the villain known as "Dabi" is in fact the son they believed to be dead, Toya. Rei watches the broadcast Dabi set up to destroy people's trust in Endeavor and heroes in general, while revealing his identity and how it was Enji's abuse that made him a villain. Endeavor on the other hand had trouble believing Dabi's claim of him being the first child he had with Rei. By the time he does expect Dabi's words and how it was his own selfish actions towards him, Rei and the rest of their family that turned Toya into a villain, Enji learns that Rei has gathered up the courage to finally see him face to face. She gives the flower he gave her as a sign of communication between them, as they talk about their family, and their oldest son together. Even though Enji believes that the blame lies on him alone, Rei knows that she too is responsible for Toya. Along with the fact that despite what happened between them in the past, both Enji and Rei love the children they had together.

Toya Todoroki is the oldest child and son of Enji and Rei. Toya was seemingly close friends with his younger brother, Natsuo Todoroki. Toya also received abuse from his father since he had a powerful flame quirk but he had a weak complexion; not being able to take the heat of his flames. After meeting again with Enji as Dabi, he revealed his true self by applying hair paint remover and confessing that all the time he was Toya.

Fuyumi Todoroki is the second oldest child of Enji and Rei and the only daughter. Fuyumi is in her early twenties and a school teacher for elementary students. She feels great guilt towards not being able to help Shoto when he needed her in his childhood. Which is supposedly one of the reasons she became a school teacher, to help other kids like Shoto find their way. Fuyumi is the peace keeper in the family and urges her brothers to try and get along with their father and forgive him for his past. Though her efforts are usually in vain her father seems to hold great appreciation to her attempts. She also regularly visits her mother in the mental hospital and does her laundry. Fuyumi is shown to be very empathetic, kind and forgiving to those around her.

Natsuo Todoroki is the Third oldest child and son of Enji and Rei. Natsuo is a young adult in college practicing for a degree in Health and Welfare. Natsuo is shown to have a great resentment towards his father for what he did to Shoto and Toya. Blaming him for Toya’s “death” and for splitting apart their family. Natsuo was said to have been very close to his older brother, Toya. Natsuo was kidnapped by a villain so that Endeavor would have no choice but to kill the villain. In the end Natsuo was saved and the villain was imprisoned. His father embracing him in worry; Natsuo told him he couldn’t forgive him for what he did and is shown to be visibly upset when he has to be the unforgiving one is his family. Natsuo is also said to have a girlfriend in college. Natsuo also visits his mom in the mental hospital when he visits home.

Shoto Todoroki is the youngest child and son of Enji and Rei. Shoto is a teenager attending UA (a school for heroes.) Shoto at first also appeared to have a lot of resentment for his father because of the abuse he was submitted to as a young child. Calling his father insulting names instead of his actual title. Although Enji’s attempts at redemption seem to have some effect on him; even praying in thankfulness when his father made it out alive from a battle with a dangerous Nomu. Although after the battle Shoto is still shown with resentment towards his father going as far as to condescendingly slurp soba after making a comment on Enji’s scar. Shoto seems to want to forgive his father but also feels he can’t after what he did to their family.

After many years Shoto decided to visit his mother in the mental hospital much to her delight. He also writes her letters daily about his school life.

Shoto is more reserved than most and tends to come off as cold and brash. Although he sometimes doesn’t know how to act having no positive social interactions in his childhood. Overall he is one of the most powerful students in his class.

This ship has its ups and downs in the fanbase. Some fans believe that maybe the two of them still have a chance together since Enji is trying to redeem himself. While others believe Enji doesn’t deserve forgiveness and should stay alone. It is the rival ship of EndHawks. A few AUs of the ship have Rei as a former pro hero who assisted Endeavor with her ice quirk, before they got married and she retired to look after their children. There have also been a few rare occasions when fans feature the "Dabi is Toya Todoroki" theory in the ship, due to Toya being their first born child and Dabi showing signs of knowing the Todoroki family when he addressed both Shoto and Enji by their full names, before he finally reveals his true identity to Enji in person and Rei through a broadcast he set up earlier on.

On AO3, EnjiRei is the most written ship for Rei. 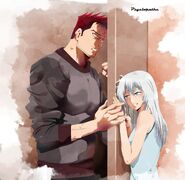 Todoroki Family refers to the family ship between Enji, Rei and their children, Shoto, Fuyumi, Toya and Natsuo Todoroki