“Annie...you always acted like you found everything incredibly stupid. You always seemed bored. But there were times when you looked alive, when you were showing off your martial arts. You said none of it mattered, but to me, it didn't look like you really believed that. I just thought you were a terrible liar.”
— Eren's monologue towards Annie.

EreAnnie is the het ship between Eren Jaeger and Annie Leonhart from the Attack on Titan fandom.

Eren and Annie met each other as trainees in the 104th cadet training corps. They become sparring partners and Annie teaches Eren some moves which he later uses on both Jean and Reiner. Eren sees past Annie's cold exterior and respects her for her insight and combat skills. In return, Annie respects Eren for his courage to 'go against the flow'.

Annie infiltrates the Survey Corps' 57th expedition to try and capture Eren as part of her mission. The two of them battle in titan form (Eren unaware of her identity) and Annie rips Eren out of his titan's nape. However, he is soon rescued by Levi which leaves Annie crying.

Eren becomes incredibly defensive of Annie when Armin puts forward his theory of her being the female titan. When they corner Annie and she admits to it, Eren shouts at her to stop kidding around. Even after witnessing her transformation in the flesh Eren struggles to accept reality and still can't transform to fight her, causing a paranoid Mikasa to question his feelings for her.

During their second hand to hand titan battle, Annie once again has the upper hand against Eren. However, with the help of Mikasa, Eren is able to pin her down and rip her titan's nape off. At this point Eren freezes at the sight of Annie's crying face and this hesitation is what gives Annie the opportunity to crystallise herself.

Eren notably displays far less anger towards Annie after learning her identity in contrast with Reiner and Bertolt, suggesting he has somewhat of a soft spot for her.

In chapter 139 of the manga, after she receives Eren's message in Paths, she starts crying and asks him "what about you?", in regards to him thinking about them living long lives, but not himself.

In the Junior High anime it is heavily implied that Annie has a crush on Eren and the two of them bond over their shared love for cheese burger steak.

Post time-skip, Eren and Annie are arguably just as villainous as each other. Both have killed hundreds of innocent people - both directly and indirectly. However, both did so against their will and with the intention of helping humanity. When they speak again it is likely they will have a deeper understanding of each other due to their shared experience, and this may lead to something more over time. Due to her resentment towards Marley, there is a high chance that Annie will switch sides and fight for the Eldians when she is broken out of her crystal, which would make her and Eren allies.

It was also assumed by Mikasa that Eren possibly had different/special feelings towards Annie when he had difficulty transforming and believing that she was the Female Titan.

• In Eren’s character interview, it is said that Eren has feelings for Annie; but doesn’t know if it’s out either romantic or just deep admiration. Isayama cleared this statement up and said it’s only “deep respect.”

• In the Attack on Titan Junior High series, it’s heavily hinted that Annie has a crush on Eren, who’s very oblivious towards it. 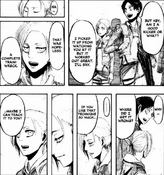 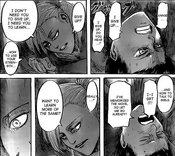 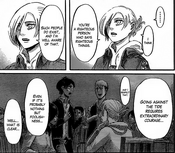 Annie expresses her respect for Eren.

Eren doesn't want to believe Annie is The Female Titan. 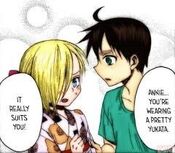 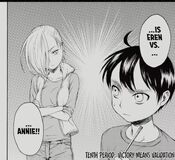 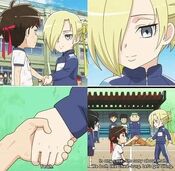 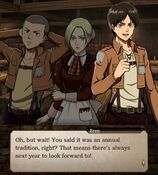