“You're the girl who saved me that day. You're the worst girl in the world.”
— Eren to Historia

EreHisu is the het ship between Eren Jaeger and Historia Reiss from the Attack on Titan fandom.

In the OVA “Distress,” Eren refuses to abandon Historia (then Krista) when she is taken hostage by thieves and is even willing to rescue her without anyone’s support. When the others agree to go with him, Eren accepts their help, and they end up saving her through teamwork.

Some time after Ymir, Reiner, and Bertholdt leave them, Historia is relocated with the new Special Operations Squad to an undisclosed location. There, Historia reveals her true identity to everyone, Eren included. Afterwards, Eren stays with Historia in the hide-out cabin, where they spend time talking. Eren openly states that he prefers the current Historia more than the good-girl masked Krista from back then, a sentiment that makes her genuinely happy. Eren’s admiration and respect for Historia only deepen when she defies Rod by throwing him to the ground. Historia tries to rescue Eren because she can not stand to hear him crying about his worthlessness. This marks an important event for both Eren and Historia, as this is the first time we get to see a more "selfish" and confident side of Historia, which Eren himself admired. Eren even mentions this event when he tells Historia about the Rumbling plan, remembering how she chose to save him that day.

When Eren suggests allowing himself to get eaten by Rod, Historia instantly puts this idea to rest by outlining all the problems surrounding it. She then comforts Eren about his father, explaining that Grisha had to take the Reiss family’s founding titan for humanity’s good. Eren later thinks about how strong Historia has become when talking to Erwin and fighting for her right to settle her fate.

Two months later, Eren speaks of Historia while Jean and Armin, including him, watch her scold some kids at her orphanage. As the two are walking together, Eren remarks on how amazing Historia is, which makes her softly blush. Soon after, a jealous Mikasa interrupts them with a dark expression on her face as she does not want Eren getting too close to Historia. When the Survey Corps are trying to retake Wall Maria, Historia stays at the farm, guarded by the Military Police soldiers. As Eren lays defeated among the rubble, Historia is shown to be standing among the fields, sorrowful and worrying. After the events at Shiganshina, Historia as the queen attends a medal ceremony in honor of the Survey Corps. Eren thinks that for the sake of humanity he would gladly give up his own life, but he could never sacrifice Historia's. When Historia awards Eren with his medal, he kisses her hand, and Historia's royal blood triggers a memory within him. Historia seems concerned and asks him if anything is wrong.

Historia is the only person, aside from the Jeagerists who knows Eren’s real intention to unleash The Rumbling for the Eldian’s freedom. Before that, she was grateful to Eren for helping them improve Paradisian in The Wall. Before leaving for Marley, Eren finds Historia at her farm to warn her that the Military Police are planning to feed Zeke to her once he arrives on Paradis. He suggests she flee or resist him, but Historia says she can't. When she hears his intention to destroy the world, Historia begs him not to do that since many innocent people are outside The Wall.

Historia feels that she could not live with herself if she did not do everything in her power to stop him. Eren then suggests using the Founding Titan’s abilities to manipulate her memories if enduring them would be too much for her, but believes she can simply stay quiet until his plan came to pass since she, as Eren quots, is the worst girl in the world — a phrase she described herself back when her father kidnaped them — who saved him. The flashback ends with Historia asking him about his thoughts of her having a child, but his answer is unknown. Eren is eventually killed, and although the Paradis population still supports Eren, Historia uses her power to protect the families of the soldiers who helped stop Eren.

EreHisu is Historia's second and Eren's seventh most written ship on AO3. The ship currently rivals EreMika and YumiHisu, ships that are preferred by the majority of the fandom. Fan wars between these ships are common. Some EreHisu fans tend to mention YumiHisu as Historia's past relationship in their works. JeanKasa often features EreHisu fanfiction as a background couple.

Some fans have noticed certain parallels between Eren and Historia (e.g. both witnessed their mothers’ deaths, both were used by their fathers). These parallels seem to connect them uniquely. With Eren being the founding titan and Historia possessing Royal blood, fans believed, the two of them together could potentially be the key to saving Eldia. There are also those, who enjoy Eren and Historia's relationship platonically, as the two managed to form a deep and trusting bond based on shared suffering.

A lot of fans speculated Eren to be the father of Historia's child which increased the popularity of the ship as well as created many theories among the fanbase. A group of fans who were dissatisfied with the last chapter of Attack on Titan manga, and the overall context it gives to the series, started their own fan projest called Attack on Titan Requiem. First it was a fan theory based on an interpretation of Linked Horizon's Akatsuki no Requiem, the ending song of the anime (S3 P. I), now it is a doujinshi that serves as a retelling of the final three chapters of Attack on titan (137, 138, 139). In this AU, Historia agrees to keep quiet about Eren's plan, but not for ambiguous reasons like in the original story, but after Eren promises to come back alive to Paradis. In this version Eren and Historia do have a romantic relationship and he becomes the father of her child. Requiem has caused controversy in the fandom; some fans believe it to be offensive to the story and Isayama himself, others treat it like any other fanfiction that is created for other like-minded fans to enjoy. 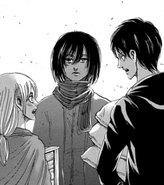 Mikasa becoming jealous after witnessing Eren and Historia together

art by KlionheartArt and viii0_8 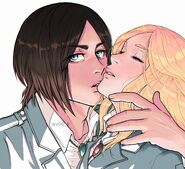 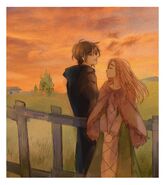