ErePeto is the het ship between Petra Ral and Eren Jaeger from the Attack on Titan fandom.

Eren was assinged to Levi's Squad, where they were assigned to supervise him. There, Eren knows of them and their names, and is left quite afraid of them, as they're tasked to kill him if he does anything crazy. While the others kept their distance, Petra was the first to approach him, and make him feel welcome. There, she mentions how he looked disappointed, and talked about how Levi isn't the person he's seen from other people's perspective, and that he's surprisingly short and a clean freak. She then says that she heard that Levi was recruited by Erwin. Their conversation is interrupted by Levi who orders them to clean it again. That night, they go down and sit at a table, where Levi introduces his squad, and the number of Titan kills they have. Hange then barges in and talks about their experiments, to which Petra simply leaves.

Days later, Hange wants to run tests on Eren's Titan, Levi is willing, and Petra, along with her fellow squad members, have to monitor. Not being able to, Eren is taken back up, which disappoints Levi, making Petra comfort him. When Eren accidentally transforms after picking his spoon up, Petra draws his sword at him, and asks if he really does trust them. Eren claims that it's simply a misunderstanding, but with no luck, the squad still draws their swords. Later, Petra learns that it's in fact an accident and bites her hand as an apology.

During the 57th Expedition, they learn of the Female Titan, which leads them into the forest. While she is on their trail, Eren is close to biting his hand and transforming, but Petra tells him that he needs to trust them. Eren doesn't transform, and instead continues by horse, listening to her. After the Female Titan is held down and they are ordered to get higher up to the trees, Eren asks if Erwin and Levi are really ones to trust, greatly angering Petra, to the point where she yells at him, saying that she has to trust them. When seeing the signal, confirming that they can go back home. On their way, Petra claims that the plan worked because Eren trusted them, but Oluo is said to think otherwise. Still, she came to his defense. Eld says that they've grown, and remarks that they pissed their pants on the first mission out. Petra is extremely shocked, and says that Eren will lose all faith in them if they talk about it. Eren is rather surprised, and asks if it sprayed through the air, shocking Petra even more.

When they encounter Annie, who is not yet transformed, she kills Gunther. Petra then protects Eren from the Female Titan, and ends up in death. Eren attempts to avenge her along with the other, only for Annie to bite through the nape and capture him. Despite their close friendship, he was still reluctant to fight Annie, despite her having killed his comrades, including Petra.

Due to the possibility of Eren and Petra's age gap being fairly large, fans have disliked this ship and concentrated instead on their bond as friends. Due to ships like Rivetra and EreMika dominating the two, fans haven't liked this ship, and it isn't shown much romantically in fanart. Although in fanart that does see them as a romantic pair, Levi is often involved. In those who don't see them as a romantic pair, Petra and Levi are often shown as Eren's "parents" and caretakers.

Many people also note that shipping them romantically would be odd, considering that Petra resembles Eren's mother Carla Jaeger, by having similar looks and eye color like her, as well as having a stern yet kind personality. Many often think that the reason why Eren got along with Petra so easily compared to his other comrades is because he was reminded of his mother in her. 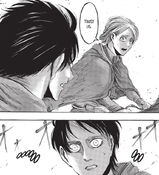