Shipping Wiki
Register
Don't have an account?
Sign In
Advertisement
in: Ships, Ships/Cargo, Attack on Titan/Ships,
and 5 more

Eren×Freedom is the cargoship between Eren Jaeger and his freedom from the Attack on Titan fandom.

Eren is shown to believe in freedom and have some sort of obsession with it. One of his biggest dreams is to be free and to free humanity. At the end of third season, when they are by the ocean, he says, “[A]nd on the other side of the ocean...is freedom... that's what I always believed.” He started his ideology when his best friend Armin showed him a book about the outside world. This made Eren realize that he has been trapped behind a wall with no freedom. From there, he decided to get his freedom by killing Titans outside the walls who took his freedom away.

Freedom became a main core of his ideology as he believe people who born are free and he will kill anyone who takes away his freedom. Eren emphasizes himself when he and Zeke travel back to the time where the former and Mikasa kill the three kidnappers.

He was so obsessed with freedom, that he even left the Survey Corps one day to the other one to enter Marley, and planned to make the attack on himself. He manipulated Falco so he could start sending letters to the Survey Corps just to let them know he was going to attack, and made him present him to Reiner, so he could talk to him about his plan, and how that day he killed thousands of people. They reunited in a basement under a stage, and Eren started telling Reiner he doesn't deserve his freedom in front of Falco. Later he transformed into the Attack Titan, putting Reiner' and Falco's life in danger, and killing hundreds of people above them. Months later reunited with Armin and Mikasa, to tell they how much he hated people that couldn't seize their own freedom, and said how he hated Mikasa since she's a "slave" of his since they were little children.

Later when he founded Ymir Fritz in the paths, he stopped her and convince her of giving him the founding titan, and grabbed her and told her she must be free, that she's only a girl that wanted a normal life. He trying to let Ymir be free of all the weight she's been carrying through years. After all the things he did for making everyone free from their respective titans and for the survivors, he finally made his way to the freedom. The white birds normally appeared in the anime are speculated to be the "souls" from the fallen comrades, and in the end you can see how one of them grabbed Mikasa's scarf and put it on her shoulder, speculating that's "Eren", and he finally made it to the freedom.

Due the fact that Eren is shown to talk about freedom a lot, this ship became sort of a joke meme. For example, when certain fans ship EreMika, then someone would comment, “But Eren is in love with freedom!”. He was so obsessed with it, that he was capable of leaving everything just for his own freedom, just like he left the Survey Corps and talked to Reiner about it, putting in danger Falco's life and everyone nearby.

Many people disliked this attitude of his, but others said it's reasonable since he and thousands of people were locked inside some walls, making them believe they were the only human's left and they should stay inside them for security, when it was a complete lie and many other people were having normal lives outside the wall. It's also understandable after everything he saw through his father's memories and when he touched Historia, and discovered how he and Armin were so blind, believing that in the time they see the ocean, it's when they're going go be free. 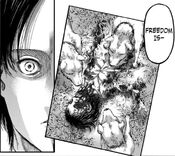