• Friends to Lovers
• Princess And Knight

Fischelle is the femslash ship between Fischl von Luftschloss Narfidort and Noelle from the Genshin Impact fandom.

Noelle and Fischl are both from Mondstadt and seem to be around the same age. Fischl is a "princess" while Noelle is a maid who seeks to one day become a knight. Although Noelle and Fischl seem not to have any interactions in the canon story line, Noelle has two voice-lines about Fischl. One of them you'll unlock at friendship level 4, and it's labeled "About Fischl: Tea". The other one unlocks at friendship level 6 and says "About Fischl: Background".

In the first one Noelle talks about how she thinks Fischl is from another world, but she doesn't know much about that. This makes her the few people that actually believe what Fischl says. She then goes on to say that Fischl loves the Knights of Favonius' Library, and that she always has her nose in a book. Noelle will bring her refreshments and Fischl will always thank her profusely. Noelle adds that when Fischl thanks her, she always goes a bit over the top and Noelle doesn't really understand half of the things Fischl is saying.

The second one talks about how one day while Noelle was cleaning the library, she notices a book on the shelf called "Flowers for Princess Fischl". Noelle says that at first she only thought it was a fantasy novel and was suprised to find out that the main character is actually a real person. Noelle then states that she couldn't believe it. She then goes on to say that the main character must be someone really incredible to have a whole book dedicated to them. Noelle seems not to have noticed that Fischl might have gotten inspired by the book.

“I think she's from another world, but I don't know the details. One thing I do know, however, is that she loves the Knights of Favonius' library. She can always be found there with her nose in a book. I bring her some refreshments whenever I go in there to clean, and she always thanks me profusely. When I say profusely, I mean she goes a bit over the top, to be honest, and... I actually don't understand half of what she's saying.”
— Noelle’s voiceline “About Fischl: Tea”

“So once when I was cleaning the library, I noticed a book on the shelf called Flowers for Princess Fischl. At the time I assumed it was just a fantasy novel... I was so surprised to find out the main character is a real person. I could hardly believe it! She must be someone incredible to have a whole book dedicated to her.”
— Noelle’s voiceline “About Fischl: Background

Fischelle is a rarepair within the Genshin fandom because of little interaction and no canon scenes between Fischl and Noelle. Though the ship soon gained attraction because of Noelle's two voice lines about Fischl. Fans also liked that they have the princess x knight and princess x maid dynamic. The ship also has no problems with age difference as they seem to be about the same age. Although the ship has gained a bit of attention, it is still an extremely unpopular pair and does not have many fanart or fanfictions, The Fischelle tag only has 20 works currently on AO3.

As for Fischelle's rival ships, there are a few. The rival ships are Fischnett, and as for Noelle, Barbelle. 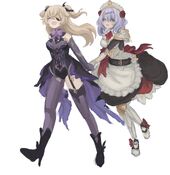