Fischnett is the het ship between Bennett and Fischl from the Genshin Impact fandom.

Fischl and Bennett are good friends in canon, though they do not currently have any interactions in events or quests.

Fischl's Character Story about her Vision mentions Bennett, though not by name, calling him the 'Adventurer Who Bears the World's Curses'. In the same story, which is set in the past, it says that he would eventually become friends with Fischl in the future when they meet.

Her voicelines about Bennett call him an 'ill-starred young man', and she says that she 'has seen with unmistakable clarity how his heart ails at being forsaken by the world'. Oz then says that 'someone needs to keep an eye on the unlucky fellow'. This indicates that Fischl, though she doesn't show it initially, has concern for Bennett and his bad luck, worried about how he gets injured so often.

In Bennett's voiceline, he calls her 'amazing'. He also says that he often asks Fischl about exploring her home world, though she often avoids the topic. He concludes that this means Fischl is worried for his safety, and that her home world sounds dangerous. This makes him one of the few characters who believe Fischl's tales of being a princess, and the only character to truly be interested in and amazed by it.

He also mentions her, though briefly, in his hangout event. He says that although he is very familiar with the wilderness, he is not at the same level as Fischl, saying that she works in the Intelligence Department.

They can both be interpreted as 'outcasts', Bennett because of his bad luck and Fischl because of her fantasies and her strange way of speaking. Bennett is one of Fischl's only friends, and vice versa. They are both in the Adventurer's Guild, and are both four-star playable characters from Mondstadt.

“Ah, the ill-starred young man... My Auge der Verurteilung has seen with unmistakable clarity how his heart ails at being forsaken by the world—”
— Fischl's voiceline about Bennett

“Oh yeah, the Prinzessin der Verurteilung from the world beyond! She's amazing. I keep asking her if we can go adventuring in her home world together, but each time I bring it up she sort of avoids the topic... She's probably just worried about my safety. Her home world sounds like a dangerous place, for sure.”
— Bennett's voiceline about Fischl

“For someone like me, I'm actually way more familiar with the wilderness than the city, especially around Mondstadt! I mean, I'm not on the same level as Fischl, who is also in the Adventurers' Guild. But that's expected, because she works in the Intelligence Department.”
— Bennett talking about Fischl in his Hangout Event

Fischnett is quite popular in the fandom. Though it is not quite as known as ships like XiaoVen or ChiLumi, it is popular enough to have a loyal following and plenty of content and fanart. They were popularized because of their status as good friends, with Bennett mentioning her in his hangout event and Fischl expressing concern for him in her voicelines. 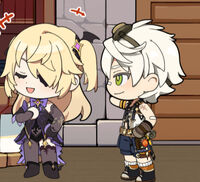 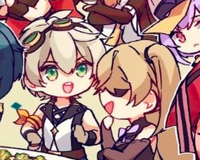 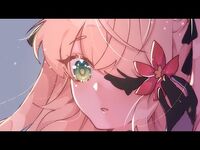 A Flower For Fischl (Genshin Impact)