Fjorester is the het ship between Fjord and Jester Lavorre from the Critical Role fandom.

Fjord, Beau and Jester are sitting at a table in the inn when a man walks over to them. He thanks them for their help and gives them a bag of coin for their trouble. They start to split up the gold, when Fjord notices that someone is watching them. Jester becomes distracted and starts talking to the two people next to them, when two people from the Carnival walk in. After they leave, Jester shows off her magic and opens all the windows in the tavern, causing attention to be drawn to them. Fjord reminds her that they're supposed to be keeping a low profile, and she quickly closes the windows again.

They start to talk about magic and Nott asks if Fjord is a magic user. Fjord says that he knows a little, Jester insisting that he's getting really good at it. Fjord thanks her but says that she's better and that he's now going to the academy to learn. Jester reminds him that they have to find a way to get him, since he isn't rich and Fjord reminds her that they'd have more if "somebody" didn't have a gambling problem.

Jester and Fjord go to the stockade and are able to get out Molly, and ask him about what happened. Molly is explaining that he doesn’t know, when the guards walk past with Beau in chains. Jester asks if they should help her out, and Fjord says that they should and go into the stockade to help her. They both try to talk to the guard, and explain how Beau was helping people before, but he just brushes them aside. Fjord says that this doesn’t fit in with their idea of having of low profile, which Jester agrees with, and they wait to see the Lawmaster.

Once they have an audience, they’re able to convince her to free Beau and start to head back to the inn. Fjord asks her what she was doing, and Beau explains that she was talking to the little girl. Jester asks why she would save her, since she turned people into zombies, but Fjord says that they don’t know that yet.

As they sit in the inn, Fjord explains to the others that he met Jester on his way down from Port Damali. She'd seen her do magic, and they both decided to travel together.

The next morning, Jester knocks on Fjord’s door to wake them up. They then head downstairs and discuss their plan for what to do. Jester gives a simple plan to sneak out and find out what’s going on, and Fjord asks if they’re taking anyone else with them. Jester says yes, as long as they can disguise themselves in some way, and goes off to ask Beau.

As Fjord is about to follow a lead, Jester says she’ll go with. Nott asks if she and Fjord are together, Jester instead asking if Nott’s interested in Fjord. Nott gives a disgusted no, and asks for some clarification on their relationship. Jester says that they’re friends, a team, like Nott and Caleb. Nott doesn’t think it’s like that but lets it go.

Most were quick to ship the two based on Jester flirting with Fjord within the first episode. As she continued to do so, fans began to ship them more and more and many believed they would end up as an endgame couple of the campaign. 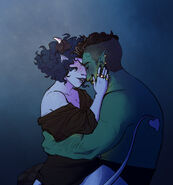 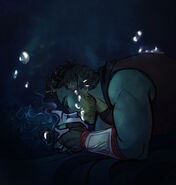 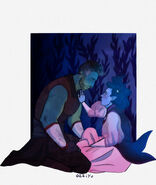