Fluffernutter is the femslash ship between Nott and Jester Lavorre from the Critical Role fandom.

Caleb and Nott are sitting in the Nestled Nook Inn, when they notice a group at another table. Nott see's all the money on their table and starts to list to Caleb ways that they could take it. The blue tiefling from the group pops her head over and asks if they're staying at the inn. Nott tells Caleb that they need to stay still, since tieflings can't see movement. Caleb thinks that's a lie, but the tiefling confirms so. But she can hear them. She introduces herself as Jester and starts to merge their groups together.

Jester asks Nott if she's ever played Crick-Queens Call, but Nott hasn't. Nott admits that she hasn't, and Jester decides to show her how. Jester tells her to place a bet and she borrows a silver from Caleb. They play a practice round and Jester ends up winning. Nott draws her sword in anger, and Beau tackles her to the ground to stop her, but Nott slips out. She accuses Jester of cheating, but Caleb is able to calm her down. Nott apologizes to Jester, who says it's okay, but tells her not to do it again.

When Nott finishes explaining how she and Caleb got in trouble for her stealing, Jester asks what she stole, and if she has a collection. Nott says that she used to, but it was taken from her. She had sticks and rocks, and some shiny stuff. Jester is confused how sticks and rocks would get her in trouble, but Nott quickly explains that they were people's cane. They both agree that it would make sense for her to get in trouble for that.

Jester promises to help Nott look for things to steal, which Nott is grateful for. She asks if the other want a demonstration, and Jester quickly volunteers to be stolen from. She asks if she should keep her eyes closed, and Nott says that’ll make it easier. Jester asks that she not take the symbol on her waist, since he’ll be pissed. Nott is taken aback by the “he”, but agrees to leave it alone, and instead goes for her pouch. She becomes nervous and unable to get anything without Jester noticing and stops. She feels embarrassed and Caleb suggests showing them some of the magic she knows.

Nott and Caleb show them the “moneypot”, which Jester is amazed by. She asks if she can turn the next piece into gold, but Nott says that it only works once a day, and can only turn copper to silver. Nott offers to sell it to Jester for five gold, when she says no, Nott offers a discount of three gold, and teach her her own magic word, then eventually lowering to one gold. Jester says yes and exchanges it for the pot. She thanks her and Nott says to come to her if she has any questions.

The next day, Jester walks up behind Nott, and asks if she likes her disguise. Nott doesn’t know who she is for a second, before Jester revels herself behind her disguise. She asks if they’re leaving and give Nott blessing of the trickster. She thanks Jester who tells her she’ll see her outside. Nott suggest having Jester leave with her and Caleb, but Jester thinks it would be weird if she would be seen with Caleb. Nott suggest that instead, that she pretend to be Jester’s daughter, which Jester agrees with and they head out.

As Fjord is about to follow a lead, Jester says she’ll go with. Nott asks if she and Fjord are together, Jester instead asking if Nott’s interested in Fjord. Nott gives a disgusted no, and asks for some clarification on their relationship. Jester says that they’re friends, a team, like Nott and Caleb. Nott doesn’t think it’s like that but lets it go.

Nott and Jester have Molly join them as they investigate the members of the carnival. Jester suddenly starts to sense something and suggests going in the tent. They enter and hear very loud snoring, and see the toad creature Kylre. Jester and Nott realize that she’d been able to detect him because he’s a fiend. They then decide to talk to the girl Toya, and wake her up as she sleeps next to the toad. She’s wakes, and they ask if she recognizes them from the other night. She doesn’t, and they ask her about the zombie attacks, but she doesn’t know much. Jester notices how soar her throat sounds and ask how often she sings. She says that she sings all the time to keep alive. They ask more about the song, but when she doesn’t offer much they ask about Kylre, and if anyone has asked her to do anything. They reach a dead end, and Jester feels like they’re doing a bad job, but Nott assures her that they’re doing well. They ask one more time if she saw anything different or weird before the show, but she didn’t see anything. They ask if Gustav has any enemies and she mentions Orna, and the two go to investigate her.

They sneak their way to Orna, and start accusing her of being the cause of the zombie's. Molly steps in and stops them, pushing them to the side.

Sam – “She uses a different dice for everything, Travis?”
Laura – “Shut up.”
Sam – “Is that what I’m dealing with now?”
— Curious Beginnings

While a rare pair in the Critical Role many fans still enjoy their interactions. Both characters offer a lot of comedic opportunities, and are used quite often. Some fans will delve past their more comedic fronts to delve into the darker parts of their pasts and personalities, even though they're rarely brought up to the members of the Mighty Nein. 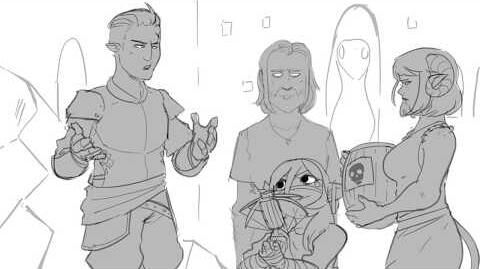 Nott the Blazed & The Fluffernutter Pitch - A Critical Role Fanimatic