Frosensteel is the Polyship between Ruby Rose, Penny Polendina and Weiss Schnee from the RWBY fandom.

Penny first met Ruby and Weiss at the same time in Volume 1. Weiss was running ahead of her teammates before crashing into Penny. The three of them officially met then. Penny and Ruby become friends right away, and Weiss and Penny seemingly become friends later. In volumes 2 and 3 Weiss, and Penny do not interact much though Penny and Ruby do. Weiss and Ruby are both there when they run into Penny again in Volume 2, after her disappearance at the end of volume 1. Weiss and Ruby both reacted to Penny's first death in volume 3.

The trio are reunited in the first episode of volume 7. Ruby and Weiss were both relieved to see that Penny was alive. When they go to see their new rooms after meeting with Ironwood, Penny leads the others explaining how Atlas academy does things. After going on their first mission Ruby, Weiss, and the others reunite with Penny, Winter, and Ironwood outside where they hear the news that they will be receiving their licenses. Penny was excited for them.

Penny is comforted by Ruby and Weiss in the air ship during the end of the finale episode of volume 7, The Enemy of Trust. In season 8 Penny, Ruby, Weiss, alongside of Blake, Nora, and May Marigold go on a mission to access Ironwood's terminal to launch the tower. Ruby, Weiss, and Whitley carry an injured Penny inside. After becoming human during that same season Penny hugs Ruby first and then immediately hugs Weiss. During the fight against Cinder in volume 8 episodes 13 and 14, Penny, Weiss, and Ruby all fight against Cinder and Neopolitan. The three try to protect each other at different times and their other allies as well.

Volume 8 ended with Penny dying and Ruby and Weiss having fallen into seemingly a different realm.

Frosensteel hasn't really been a popular ship in the RWBY fandom, hardly anyone liked the ship nor knew about it until Volume 7. The ship grew in popularity once they were seen comforting each other in the Volume 7 finale. It has a decent amount of fans on websites like tumblr.

Some fans even ship it because it is both Nuts and Dolts and White Rose. While those ships are somewhat rival ships in certain parts of the RWBY fandom. Those who liked one or both of those ships before shipping frosensteel typically decided to make Penny, Ruby and Weiss fall in love with each other instead of leaving one of them out. 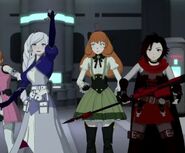 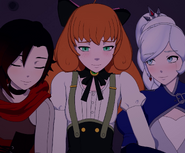 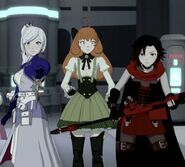 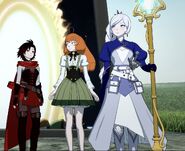