• Opposites Attract — Sayaka is outgoing, while Toko is more of an introvert.

Fukazono is the femslash ship between Sayaka Maizono and Toko Fukawa from the Danganronpa fandom.

The two girls rarely interact with each other in Danganronpa: Trigger Happy Havoc, largely due to Sayaka's early death. What few interactions the two girls do have are less than positive, mainly because of Toko's unapproachableness.

During Chapter 1, a minor dispute occurs between Toko, and Mukuro Ikusaba (disguised as Junko Enoshima). Sayaka lightheartedly remarks that the two girls sounded like they were fighting like sisters. Later on, the students are all given their own motivation video, which is used to drive them into killing another student. When asked what was in her video, Sayaka doesn't respond, prompting Toko to ask her what was wrong, while hastily demanding her to hurry up and tell the group. Sayaka eventually runs out of the room in a panic, and Toko discourteously remarks that she personally doesn't care what happens to her.

Following Sayaka's death, Toko is one of many students who accuse Makoto Naegi of being the culprit, due to the murder taking place in his room. Toko is noticeably more belligerent over the matter than the others, though this is likely because of her paranoia, as opposed to any personal distraught over the pop idol's death. During the Class Trial, Toko remarks that the group is more likely to believe in Sayaka over Makoto, due to the former being a national superstar.

In Ultimate Talent Development Plan, a slightly more positive relationship is established between the two girls. During one event, Sayaka is seen spending time with Toko in the dining hall, along with Mikan Tsumiki. Sayaka tells Toko that she is amazed to have a writer like her in the same class, to which Toko superciliously responds that she is a popular idol who gets all the attention. Sayaka admits that she hadn't read any of Toko's novels, but that she plans to soon, and is considering to start with her debut work. Toko then accuses Sayaka of just pretending to be into her work, just for an interview in a fashion magazine. Sayaka is surprised by the outburst, and insists that is not the case. Mikan mentions that the protagonist of one of Toko's novels reminded her of Sayaka. This shocks Toko, who firmly denies it and claims that her novel is based on her own fantasy. Sayaka giggles and says that she's interested in the novel that Mikan is talking about, and asks her for the title so she can read it later. Toko blushes while muttering to herself, happy that her work was the topic of a conversation between two people. Toko then gives Sayaka permission to borrow her novel from the library, while also telling her to pay for it, as she's probably rich.

“Yeah! It sounds like you two are so close now you're fighting like sisters!”
— Sayaka calling Mukuro and Toko's bickering "sisterly."

“I can't believe a writer is in the same class as me... That's pretty amazing!”
— Sayaka amazed that a writer like Toko is in her class.

“Oh...then I'm interested in the one Mikan was talking about. Can you tell me which novel it is later? I think I'll read it, along with Toko's debut work.”
— Sayaka expressing interest in Toko's novels.

“How rare... My novel was the topic of conversation between two people... Sayaka! You can borrow it from the library, but you have to buy it! Since you're probably rich!”
— Toko happy to see her working being discussed, and allowing Sayaka to borrow her novel.

The ship is quite small in the fandom, and it easily loses to some of the characters' more popular ships, like Leosaya, Togafuka, and Tokomaru. The main appeal of the ship is primarily found within the dynamic of "anxious wreck" and "caretaker." With Sayaka's caring and outgoing personality being the perfect juxtaposition to Toko's more apprehensive and introverted one. In spite of the ship's obscurity, there is a small amount of fan-created content dedicated to it. 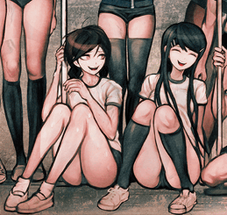 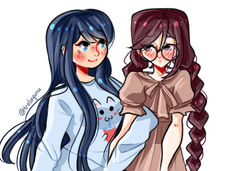