Funky Beats is the het ship between Neon Katt and Flynt Coal from the RWBY fandom.

They are eventually both defeated by Yang. We then see them again in chapter 11, volume 3 where them, team arbn, team sssn, team jnpr and various members of team rwby all fought together to protect beacon from the grimm and the atlesian paladins. Neon teams up with reese to take down one atlesian paladin.

The next time we see Neon and Flynt is in volume 8 chapter 9, where Neon nervously asks Flynt if he knows a tune for this (refering to the sticky situation they're in now). To which Flynt responds that he doesn't know if anyone does. They then climb over the trenches when ordered to and next they are seen fighting against a group of grimm together. Flynt using his semblance and Neon using her agility to take them down quickly.

funky beats is a rarepair in the RWBY fandom. Mainly because both flynt and neon are minor characters in the show and don't get a lot of screentime. It has a small but decent sized fanbase on tumblr. Some fans have drawn the two dancing together since they're both very musical. Fans are hopeful to see more of these two in later volumes of rwby. 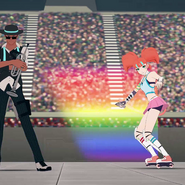