Gabenath is the het ship between Gabriel Agreste and Nathalie Sancoeur from the Miraculous Ladybug fandom.

Nathalie and Gabriel are the main, codependent villains in the series. Before season two revealed that Gabriel is indeed Hawk Moth, it was unclear if Nathalie knew anything about his second life as the supervillain until the end of "Collector".

It has been hinted a few times that Nathalie is in love with Gabriel, due to her saying in the episode "Stormy Weather 2" that she has deep admiration for Gabriel, which has become romantic. It's also due to her kwami saying that Nathalie wanting to get the Miraculous for Hawkmoth is romantic. She really cares about Gabriel and is very devoted to him, and would do anything for him. Gabriel - on the other hand - trusts her deeply and feels comfortable around her. Which is why he told her his secret, the power of the Miraculouses and how he plans to complete his goal.

To help Gabriel gain the Ladybug and Cat Miraculouses, Nathalie allows Hawk Moth to akumatize her into Catalyst, after he asked Nathalie if she is truly wants to serve as his power-enhancing supervillain. So they can create an army of crimson akumatize villains. Catalyst watches the battle from the safety of Hawk Moth's lair and once she saw him losing to Ladybug, Cat Noir and their Miraculous Holder allies, she takes the Peacock Miraculous so she can use its creature creating power to prevent his Butterfly Miraculous from being taken from him, despite the wrick. While Gabriel was grateful for Nathalie's help, he had warned her about the dangers of using a damaged Miraculous and was horrified when he learned that Nathalie had used it to become Mayura. Which is why he rushed back home so he can tend to her, as Nathalie's health is paying the price for her action. Nathalie explains that she'll do anything to help Gabriel reach his goal by assisting him to defeat Ladybug and Cat Noir.

Since then Nathalie was allowed to keep using the Peacock Miraculous to up their chances. Along with them putting their powers together in hopes that they'll be able to bring Chloé Bourgeois to their side. Using the damaged Miraculous too much, however, had pleased Nathalie's health in much fairer danger, like it had done to Gabriel's wife. Which is why Gabriel's concern for her had him asking Nathalie to stop using it when she collapsed in "Ladybug". Once he was asleep, however, Nathalie took the Miraculous back from him in hopes that her plan will finally allow them to obtain the Miraculouses they seek. Despite the danger to her own life. When Gabriel realized what Nathalie has done and the wrick she is placing herself in, he rushes to her aid as Hawk Moth and used Cat Noir as a bargaining chip to save Mayura from Ladybug. Even though Gabriel understands why she went behind his back, he didn't want to lose Nathalie to the same fate that fell upon his wife, and even though Nathalie has accepted the fact that her time as Mayura is over, she knew that he'll still call upon her help at any time.

Gabriel allows Nathalie to use the Peacock Miraculous again in "Heart Hunter", when they found the guardian and the took the Chinese Miracle Box from Fu. Even though the events of "Miracle Queen" has two lose the box to Ladybug and Mayura's weakened state forces Hawk Moth to retreat while carrying Mayura in his arms, the Peacock-themed supervillain was able to get her hands on Fu's table that translates the pages within the Miraculous spell-book. When Nathalie inform Gabriel of this while he shows concerns for her health and ill-like state, she also tells him of a helpful fact she uncovered from it. How to fix a damaged Miraculous. Gabriel uses the knowledge Nathalie obtained for him to fix the Peacock Miraculous.

Gabenath isn't the most popular ship in the fandom, yet it still has quite a lot of devoted shippers. Some people don't ship them, but even so, they think the antagonists might be in a relationship or Nathalie might have feelings for Gabriel, due to many obvious hints in the series. Since Adrien cares about his father and suspects him and Nathalie of being in a relationship, as well as there being brief signs that Gabriel is starting to devolve unconscious feelings for her (whenever he shows concern for Nathalie's health and feel being from using the damaged Peacock Miraculous), it has caused a few fans to view Nathalie as Adrien's future step-mother. Those who don't see this happing mostly have it as a joke, but those who do sometimes add Nathalie in their Agreste family fanwork.

The ship between these two villain Miraculous holders has inspired a few fans to ship their Kwamis, Nooroo and Duusu together, so they can ship Gabenath beside Duuroo.

On AO3 Gabenath is the 6th most written romantic ship in the Miraculous Ladybug tag; as well as the 1st most written ship for both characters. 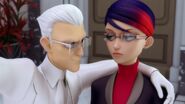