Married with a son; Emilie is in a deep coma

Gabmilie is the het ship between Gabriel Agreste and Emilie Agreste from the Miraculous Ladybug fandom.

Gabriel Agreste is a world-wide famous fashion designer who owns the Gabriel brand. He's one of the antagonists in Miraculous Ladybug who uses the Butterfly Miraculous to become Hawkmoth. Emilie Agreste appears to have been an actress as she was the leading role in the movie, Solitude. Gabriel and Emilie have been married for years and they have a son together named Adrien Agreste who is a model for Gabriel. It is heavily implied in the show that Emilie was the former Peacock Miraculous holder which led to her falling into a coma as the Miraculous was damaged at the time.

Emilie has been in a coma for over a year now and it is said by Nathalie that she is falling deeper in her sleep. Hawkmoth has a desire to steal both the Ladybug Miraculous and Cat Miraculous so he can combine them and make a wish for Emilie to wake up again. Hawkmoth will go to any length to make Emilie awake again which shows that he deeply loves her and misses her incredibly. In “Ladybug & Cat Noir”, a painting of Gabriel, Emilie, and Adrien is hung over a fireplace in the dinning room of the Agreste's Mansion. In multiple episodes, a painting of Emilie repeatedly appears behind Gabriel when he is in his office.

Emilie is kept secret in a glass coffin under the mansion and Gabriel frequently goes to visit her with flowers. This can be seen in “Style Queen” and “Catalyst”. There is also a statue of Emilie in their backyard that both Gabriel and Adrien like to spend time looking at. This statue appears in “Catalyst”. During the New York Special, once again, Gabriel visits Emilie with a rose and calls her "my love". He announces he will leave for New York and adds that it will be "torture" being away from her. He brings up the wish again by saying he has found a miraculous in NYC and will retrieve it to defeat Ladybug and Cat Noir.

After losing to Ladybug's superhero team once again, Gabriel goes to Emilie's coffin. Gabriel states that he should have already combined Ladybug and Cat Noir's powers and starts banging on the coffin, saying he's not worthy of him and Emilie's love. In doing so, the glass coffin cracks. Gabriel closes the coffin and runs away.

Gabriel and Emilie have a son named Adrien Agreste, who is a model for Gabriel.

The ship is well known, and fans can agree that Gabriel deeply loved and cared Emilie, even eager to seize Ladybug and Cat Noir's Miraculouses, just to bring her back to him and for his son. They both had a Miraculous, but it's unknown what Emilie used the Peacock Miraculous for. In the episode "Timetagger", it was confirmed that Gabriel will no longer be Hawk Moth, but the future Butterfly Miraculous Holder can be doing the same thing as Gabriel did, as trying to get Ladybug and Cat Noir's Miraculouses for an unknown reason. The ship is mainly rivaled by Gabenath.

Gabriel's Relationship with Emilie on the Miraculous Ladybug Wiki 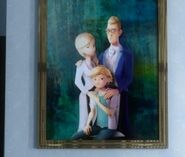 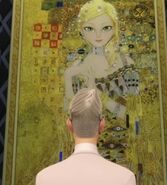 Painting of Emilie in Gabriel's office.

Emile in a glass coffin. 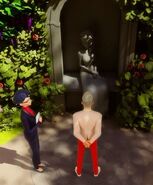 Statue of Emilie in the family's backyard.