Ganmiya is the femslash ship between Ganyu and Naganohara Yoimiya from the Genshin Impact fandom.

Ganyu and Yoimiya are not known to have canonically interacted within the Genshin Impact timeline.

Confirmed in Yoimiya's voiceline "About: Lantern Rite", she states that a majority of the Lantern Rite festival's fireworks are purchased from the Naganohara Fireworks shop itself. Although not confirmed, going off of so, if Ganyu is one to commonly order fireworks for the festival, it implies possible interaction between the two. Ganyu ordering the fireworks for the Lantern Rite festival isn't impossible, either. Since Ganyu is well known for completing common works, we can assume ordering fireworks is highly possible to be one of them during the time of Lantern Rite. In that situation being so, it would be confirmed of interaction between the two.

Some similarities between the two involve Yoimiya's wearing of her headpieces. Yoimiya wears several different accessories on her head area, a most common color present being red. When Ganyu is questioned about her horns, or they are brought up, she hesitates, then refers to them as her "headpieces". Although this doesn't mean much, it's a small little similarity between the two that isn't much noticed. While Yoimiya wears actual headpieces with dominantly red colors, Ganyu excuses her horns as red headpieces instead.

Ganyu and Yoimiya both hold Beidou, the captain of the Crux Fleet, at respects. This can be seen when reading both of their voicelines "About: Beidou". In Ganyu's, we hear her talk about how she believes Beidou does much for Liyue, and in Yoimiya's we hear her talk about how she set up a fireworks surprise for Beidou to thank her. We can also read from Ganyu's lore that it's not uncommon to see her aggravated upon hearing negative talk about Beidou, showing she holds her in high standards. The two's mutual respect of the Fleet captain is something the two share in common despite their contrasting personalities and likes. The feelings these two hold for Beidou also has led to two fairly uncommonly talked about ships, like Ganbei and Beimiya.

The two of them both use a flower of the such for ascensions, the naku weed and qingxin. The naku weed has a purple color to it, while Ganyu herself has purple eyes, alongside her underclothing outfit being a slight purple tint. On the other hand, the qingxiu has a white like color, sort of like the bandages Yoimiya wears under her clothing and on her wrist in her outfit. The colors are only slightly present in each other's designs, but it's a small bit that is interesting nonetheless. In addition to the colors of their outfits, the two flowers both have hearts on their designs (see image).

Ganmiya was, as of currently knowing, thought of around June 10th of 2021, a few days after the initial announcement of Naganohara Yoimiya. It wasn't until around October to November of 2021 that ganmiya had started to get slightly more traction as a ship. Although it still remains a fairly unknown ship within the fandom, it isn't entirely shadowed away, either. Ganmiya is unpopular, but manages to have 3+ works on AO3. The ship Ganyu x Yoimiya was originally shipped due to the fact they were both hated upon initial announcement of them being released. In addition to this, they also hold contrasting elements from each other. Ganmiya is overshadowed by many other ships, such as Ayamiya, Ganqing, and Xiaoyu.

The ship Ganmiya is a wlw (or nblw due to Ganyu being an inhuman being) ship between the calm adepti that works in Liyue Harbor and the eccentric girl that creates fireworks for the people of Inazuma. The two dynamic feel as well is fairly common in some other ships, being introverted x extroverted ( examples of this can be Terumob, Suselle, and Yukimomo ) . Although the ship is fairly unseen, it isn't entirely, either. Despite being unpopular, ganmiya still has a small amount of content to its name consisting of a few fan artworks, fan fictions, image edits, ext. The small amount of work to the ship's name has resulted in a small amount of fans of Ganmiya.

Ganyu and Yoimiya balance each other out quite well. While Ganyu is described as graceful and quiet, Yoimiya is described as childish and a girl filled with fiery passion. The dynamic of the two being quite simple, nonetheless. Ganmiya is commonly portrayed as the two helping each other out with works while balancing each other out. It is fairly known for the idea of Yoimiya showing fireworks to Ganyu for special occasions, such as her birthday or their anniversaries. One of the reasons fireworks are so special to Yoimiya are due to they remind her of her times with Ganyu before the Sakoku Decree lockup, as well, since we know they're important to her from her story quest cutscene.

Due to Ganyu's anxiety, a somewhat common headcanon in terms of Ganmiya involves Yoimiya introducing Arataki Itto. Ganyu is introduced to Itto in Yoimiya's attempt to help Ganyu become more comfortable with her horns by introducing her to someone else with horns she knows. The idea of Itto helping Ganyu overcome her anxiety is also present in the ship Ittoyu. 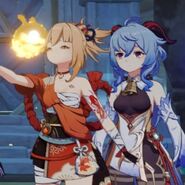 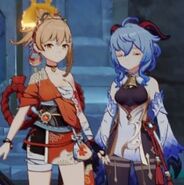 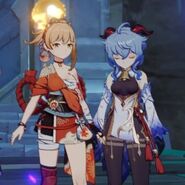 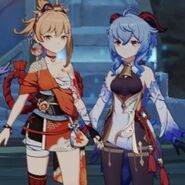 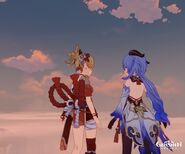 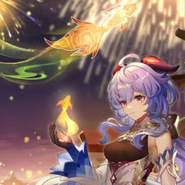 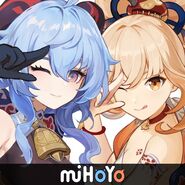