“Okay, everyone. Please excuse me, I should get back to work now. Take good care of Keqing for me.”
— Ganyu, during the Moonchase Festival

Ganqing is the femslash ship between Ganyu and Keqing from the Genshin Impact fandom.

Keqing has two voicelines about Ganyu, the first of which states her distaste towards Ganyu's devotion for Rex Lapis. "In the workplace, she'll carry out my instructions to the letter, even when I can tell she has her reservations. It's a good attitude to have as a career professional." However, she also praises Ganyu's work attitude and ethic.

Her second voiceline, titled "Reflection", has shown her to have changed some of her previous ideas of Ganyu. With all the events occurring in Liyue, Keqing talks about how she relies more on Ganyu. She says it feels a little awkward, especially since she used to be so critical of Rex Lapis in front of Ganyu, but Ganyu doesn't seem to mind.

Ganyu, similarly, has two voicelines about Keqing. Just like Keqing, the first voiceline describes her indignance towards Keqing for her lack of respect for Rex Lapis. Although Rex Lapis himself has said that Keqing's attitude is what Liyue needs in this time, Ganyu is still skeptical.

The second voiceline is about her changing perspectives like Keqing had. She talks about how Keqing had come to her for help, and slowly, Ganyu had began to understand her a bit more.

After that, Paimon seemed to be eager to know about it and started asking Keqing why she wasn't curious about it. This led to Ganyu getting very nervous and Keqing standing up for her, saying they should not try to find about Ganyu's secrets if she doesn't wish to share them. Ganyu then thanked Keqing, telling her she always seen her as a very kind and considerate person, making Keqing flustered in response. Ganyu then takes her leave afterwards, but not before asking the others to ”take good care of Keqing [for her]". The Traveler then comments saying that Ganyu sounded like Keqing's big sister at the end.

During the Lantern Rite event, Cloud Retainer was surprised when Keqing came to visit her. It is also shown that when Cloud Retainer started to talking about Ganyu's past, the subject in question wanted to leave the conversation saying that she has important matters to attend to, but was stopped by the former saying that she could ask Keqing instead of going back to Ningguang. Keqing then helped Ganyu by lying that Ganyu had to ask for some advice from Ningguang because both Keqing and Ningguang have different opinions on the matter.

After the Lantern Rite cutscene, we can find Ganyu at Mt. Aocang. When talking to Ganyu, she says how she would just spend the holiday with Cloud Retainer, as usual, while the latter would continue to ask if the adepti had any career development or crushes that she should know about.

“Who knows what Rex Lapis must have done to inspire such blind devotion from Ganyu... But her reluctance to be critical is not without its advantages. In the workplace, she'll carry out my instructions to the letter, even when I can tell she has her reservations. It's a good attitude to have as a career professional.”
— Keqing's first voiceline about Ganyu

“I find myself getting a second opinion from her a lot these days. Lots of things come up that I just have no idea about, and of everyone in Liyue, she's probably the most familiar with Rex Lapis. Heh... I feel a bit awkward, though, because I used to be openly disparaging of Rex Lapis in front of her... But she doesn't seem to mind, so I guess I've got nothing to worry about...”
— Keqing's second voiceline about Ganyu

“I cannot stand her disrespectful attitude towards Rex Lapis! But he says to me, "Ganyu, this is just the kind of person Liyue needs in this day and age." I guess I'm not smart enough, because I simply do not understand what he means by that. I think I need more life experience to become wise enough to comprehend his words.”
— Ganyu's first voiceline about Keqing

“She came to me recently to discuss the reopening of the Bishui trade route. She even asked me what Rex Lapis would do if it were him. Admittedly, what we came up with was not quite on par with what he would have chosen. But... seeing the way she kept starting her plan from scratch over and over again, I think I started to understand her a little bit.”
— Ganyu's second voiceline about Keqing

“If Ganyu has a secret and she wishes to keep it that way, nobody should make it their business and try to get it out of her. That's just basic decency, is it not?”
— Keqing, standing up for her during the Festival

“Keqing, I… Thank you. You're so kind and considerate. I've always seen that in you.”
— Ganyu, after Keqing stood up for her, during the Moonchase Festival

“Okay everyone, please excuse me, I should get back to work now. Take good care of Keqing for me.”
— Ganyu, during the Moonchase Festival

This pair quickly became popular in the fandom because of the ship dynamic and aesthetic. The fact that they are both a part of the Liyue Qixing also helps boost their fame. The contrasting opinions regarding Rex Lapis has been used to write some light hearted rivalry stories, especially with the two learning to understand each other as mentioned before in their voicelines. Many people enjoy the purple and blue cross of the characters; with tons of fanart having been created with this in mind.

There are currently 762 works of the ship on Archive of Our Own. 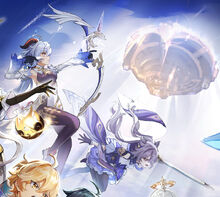 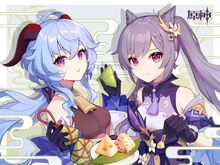 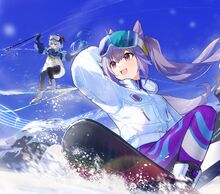 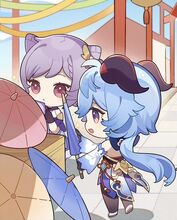 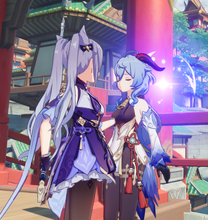 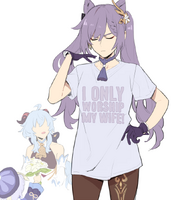 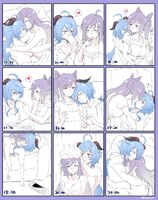 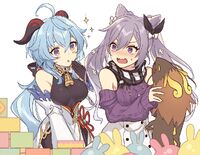 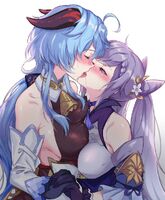 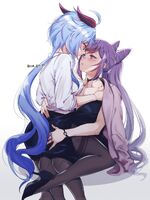 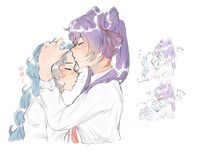 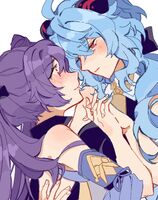 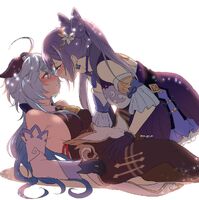 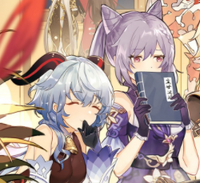 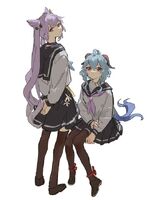 Response of the Official Genshin Impact Twitter before deletion