View source
This article is about Ganyu and Lumine. You may be looking for the ship between Ganyu and Aether.

Ganyumi is the femslash ship between Ganyu and Lumine from the Genshin Impact fandom.

Upon choosing the female Traveler, Lumine, the first interaction with Ganyu is in the archon quest. She appears as Lumine is talking with Paimon and tells her that she has been invited to the Jade Chamber by Ningguang. When questioned, Ganyu introduces herself to Lumine as the secretary and emissary of the Liyue Qixing.

In Ganyu's story quest, Lumine first finds out from the three secretaries, who originally worked at the Jade Chamber, that Ganyu hasn't come back to her work. Upon searching for and finding her, Lumine discovers that Ganyu thought that she was replaced when she saw the three secretaries doing her work while she was absent. This sent her into distraught, caught between the worlds of humans and adepti. When Lumine continues speaking to her, Cloud Retainer comes over and tells a few stories of Ganyu's childhood. This embarrasses her and the half adeptus leaves to train and prepare for her trial.

Lumine and Paimon follow her, where they complete the trial with her before meeting up with Xiao. There is another trial that Ganyu goes through and after she is finished, someone by the name of Xin Cheng comes to them. Believing that they are adepti, he asks for blessings which Ganyu tries to gently deny and explain to him that he must work for his fortune. When Ganyu grows even glummer from the interaction, Lumine and Paimon cheer her up and manage to convince her to return to Liyue Harbor.

Once arriving at Liyue Harbor, the group meets Ganyu's junior, Huixin who asks for help with some trouble involving tax reports. This leads Lumine and Ganyu on a quest to deal with the stores "Wanyou Boutique" and "Second Life". Upon finishing this lengthy quest, Huixin, cheerful again, invites Lumine and Ganyu to a meal.

After having a meal with Ganyu and her junior, Lumine accompanies her back to the Jade Chamber where they relieve the three secretaries of their addition work from Ganyu's leave. Before leaving once again, Ganyu thanks Lumine and Paimon for accompanying her and helping her overcome the conflict inside her. She also mentions that she would like to travel with them again in the future; if her busy schedule ever allows her.

This ship was formed from the friendly interactions in the story quest and Ganyu's rather open attitude towards Lumine. Albeit, since the Traveler can be either Aether or Lumine, it does somewhat diminish the strength of this ship since it can be made into one with Aether and Ganyu. Despite that, fans still enjoy this ship and like seeing the two hang out; since Ganyu mentioned she'd like to travel with Lumine more, that could mean more content and new acts in her story quest for Ganyumi shippers in the future.

On AO3, there are currently 25+ works depicting this ship. 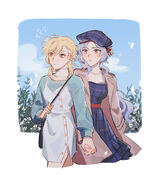 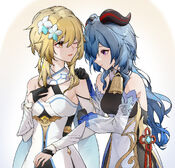