• All Love is Unrequited
• Belligerent Sexual Tension - Cardassians flirt by debating, and what do the two do constantly? Debate everything from literature to morals.
• Curiosity Causes Conversation - Garak is very intrigued by Julian's willingness to show compassion to others without an ulterior motive.
• Dating Catwoman
• A Friend in Need
• Held Gaze
• Interspecies Romance
• Odd Friendship
• Like an Old Married Couple
• Pair the Smart Ones
MOMENTS<center>
• Big Bad Friend
• Chocolate of Romance - Garak gives Bashir some chocolates.
• Don't You Dare Pity Me!
• Leaving You to Find Myself - Garak leaves Bashir and DS9 to return to Cardassia.

Garashir is the slash ship between Julian Bashir and Elim Garak from the Star Trek fandom.

Garak unexpectedly stops by Doctor Julian Bashir's lunch table at the replimat to introduce himself. With little tact, Bashir suggests that Garak is a Cardassian spy. Bashir rushes to Ops to report the encounter, but Commander Benjamin Sisko is busy.

Garak finds Doctor Bashir on the Promenade, but dispenses with pleasantries. He notes the two recently arrived Kohn-Ma terrorists, which immediately worries Bashir. Garak, however, convinces him to come to his shop that evening at exactly 20:55 hours to "buy a suit." Bashir eventually understands and leaves. Unsure of what to do, Bashir asks Sisko for advice. Sisko recommends that he keep his appointment, as he understands it is a means for unofficial communication.

Bashir, arriving two minutes late to Garak's, is quickly herded into a back stall, where he is allowed to overhear the Klingon sisters agreeing to sell a small cylinder of bilitrium to Tahna in the Bajor system in four hours. Once they have departed, Bashir asks what bilitrium is, and Garak informs Bashir that it is a rare crystalline element, the atoms of which can release a tremendous amount of power. Garak also happens to know that Tahna was fleeing from the Cardassians for the theft of an antimatter converter.

A Stitch in Time

“Truth is in the eye of the beholder, doctor. I never tell the truth because I don't believe there is such a thing. That is why I prefer the simple straight line simplicity of cutting cloth.”
— Garak; Cardassians

Bashir – “If I'm a vulcan, then how do you explain my boyish smile?”
Garak – “Not so boyish anymore, Doctor.”
— A Time to Stand 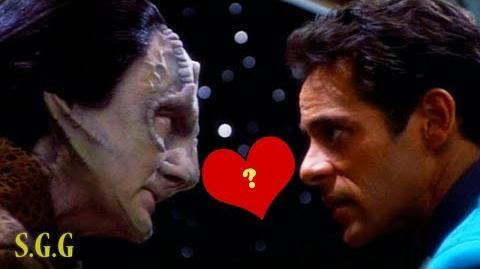 Retrieved from "https://shipping.fandom.com/wiki/Garashir?oldid=173085"
Community content is available under CC-BY-SA unless otherwise noted.