Shipping Wiki
Register
Don't have an account?
Sign In
Advertisement
in: Ships, Ships/Het, Beauty and the Beast/Ships,
and 7 more

Beauty and the Beast
Once Upon A Time

Gastelle is the het ship between Belle and Gaston from the Beauty and the Beast and Once Upon A Time fandoms.

Even though Belle admits that while Gaston is handsome, his rudeness, caring too much about himself, can be a bit brainless at times and a few others things about him, are the main reasons why Belle sees him as the wrong man for her. Since her beauty is the only reason he wants Belle to be his wife, and he believes that the most beautiful man and woman in their small village should end up together. When the two cross paths in the village, Belle acts polite to him while Gaston takes Belle's book from her as he asks Belle how she could read a picture-less book, before dropping it in the mud as he tries to get Belle to focus on him. Belle on the other hand wasn't too keen on Gaston's company or how he treated her new book, and after both he and LeFou laughed about the cruel view they have on her father Belle wasn't foaled by Gaston's act of defeating her father. Since he only did so in a failed attempt to gain Belle's affections.

Shortly after Maurice left for the fair, while Belle stays behind, Gaston gets his friends to set up a wedding party outside her cottage, so he'll be able to marry Belle short after he gets her to except his proposal. Once Belle allowed Gaston in her cottage, he began to tell Belle his plans for the future he wants Belle to be apart of, with her rubbing his feet after a day of hunting while their future sons play with the dogs. Belle on the other hand didn't want that life and turns Gaston's proposal down, by saying that she doesn't deserve him before getting him out of her home. Enraged by Belle turning him down, he vows to do whatever it takes to make her his wife. Not long after he and his friends left, Belle checked to see if he had indeed left before expressing how she doesn't want to be his little wife.

While Belle was "away" from the village, Gaston was still sore about her turning him down until LeFou helped to life Gaston's spirit back up, before Belle's father came in ranting about a Beast locking his daughter up in a castle. Maurice's ranting and knowing the love Belle has for her crazy old father, gave Gaston the idea that would have him force Belle to except his proposal of marriage. As he pays the willing Monsieur D'Arque, the head of the asylum, to assist him. Because Gaston had ordered LeFou to alert him the moment Belle and Maurice return home, he gets everyone to gather around their cottage as D'Arque comes to send Maurice to the asylum. Unaware that Gaston is the mastermind behind this, Belle asks him to help her save Maurice while he acts as a concerning "friend", but once he informs Belle that he'll sort everything out once she agrees to marry him she turns him without a second thought. This gets Gaston to order the villagers to lock Maurice up. Because of Gaston's actions, Belle was forced to reveal the Beast's exitance to him and the rest of the village in an attempt to save her father.

Enraged that Belle prefers a hideous monster over him, along with Belle defeating the Beast by calling Gaston the monster, Gaston's jealousy and pride has him declaring Belle to be crazy as her father, before locking the two up so they'll wouldn't be able to warn the Beast of their attack upon his castle. Where Gaston hopes to kill the Beast and that his death would allow him to finally make Belle his. Once Belle escapes she made her way back to the castle, where she sees Gaston fighting Beast and tries to stop him from hurting Beast. During Gaston's battle with Beast, he taunts the cursed prince on how he's going to make Belle his and that she could never love a monster a like him. In the end, Belle choices the Beast while Gaston had fell to his death, after he stabbed Belle's lover.

Belle and Gaston first meet when her father tells her about the possible arranged marriage between them to save her kingdom. Belle is reluctant since she’s heard unflattering stories about him. As they go on a walk in the woods they kinda bond and when they find a child ogre lost and trapped in a hole in the ground, they go to her castle and look in the library to find an object to determine the ogres intentions. As they find the object they need, they nearly kiss and Belle promises to bring her fathers soldiers for back up just in case.

Belle arrives just in time and she finds out that Gaston hurt the ogre on purpose to make it hit him and Belle shows the mirror at the ogre and it’s pure of intentions. However, she shows it at Gaston eyes and sees that he never had good intentions. Belle tells him if he wants to hurt the ogre he has to hurt her first and he stops his attack. Later that night as Belle brushes her horses hair, Gaston still wants to marry her and she hesitantly accepts his marriage proposal, but it’s only to save her kingdom.

Sometime later when Rumple goes to their castle to make their life changing deal, Gaston arrives to save Belle and ends up getting turned into a rose and dies, sending him to the underworld “UnderBrooke”. In the second half of season five, Belle accidentally goes to the underworld and sees Gaston. She tries to help him move on and very accidentally pushes him into the river of lost souls, sending him to a worse place in death.

Like the other live-action remakes of classic Disney films, there are some differences between the original animation and the live-action remake, but the relationship between Belle and Gaston remains the same.

Belle and Gaston have known each other for many years, he is a former War Captain who feels like he's missing something and thinks that Belle will complete him. He attempts to play hero whenever he hears that she in trouble and tries to woo her every time he sees her. He even tries to give her a beautiful bouquet of flowers and asks if he can join her for dinner after talking about the book she is currently reading, implying that he has also “reads” books. She denies his dinner offer and asks if she as made up her mind about who she'll mother children with, she claims that she's not ready to have children and he states perhaps she hasn't met the right man and due to meeting all the men in their village he then asks her to marry him.

Because Belle kept turning down Gaston's many approvals for marriage, due to his rude behaviour, it makes him more determent to make Belle his wife. Since Belle is the only girl who doesn't try to woo him, like he is used to. Even though Gaston warns Belle what happens to unmarried woman once their father's pass away and how marrying him can save her from becoming a beggar, Belle still refuses him by saying that she's not that simple to hang out with, much to his dismay. Gaston tried to win Belle's father choice when he volunteers to save Belle when Maurice says she's in danger. But Gaston snaps and loses his chance at winning Maurice's approval, once he saw parts of Gaston's character that put him off. Gaston tries to force Maurice to give him his approval when he convinced everyone that Maurice needs to be sent to the asylum, but Maurice still refuses him. As did Belle when she returned to rescue her father from Gaston's allies.

In the final act of the remake, Gaston is enraged that Belle still wouldn't expect him and threatens to kill the Beast, before throwing her inside the local insane asylum carriage with her father, so she wouldn't be able to stop him. Gaston nearly kills the Beast and when he cowardly runs from the Beast's threat to leave he runs and when the Beast is reunited with Belle, Gaston shoots him and as the caste crumbles beneath his feet he falls to his death.

Despite the two being enemies, is hasn't stop fans from shipping Belle and Gaston together, since it isn't uncommon to ship Disney Princesses and their main antagonists together. Some Gastelle fanfics have Gaston reforming through Belle and the two forming a close bond before she begins to fall in love with the Beast. While the ship is supported by a few rare Disney fans, there have been times when people prefer to focus on their Once Upon A Time counterparts. Even though their relationship in OUAT wasn't so different from the Disney film, along with some Gastelle fanfics having Belle expecting Gaston's proposal to save her father.

On AO3, the ship has 83+ fanfics on the Disney side of it while the OUAT side of Gastelle only has 58+.

Belle's Relashinship with Gaston on the Disney Wiki 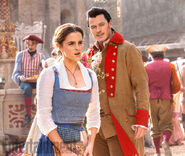