Canon according to multiple sources

Partners in crime; Roman is dead

Gelato is the het ship between Roman Torchwick and Neopolitan from the RWBY fandom.

Roman and Neo are partners in crime who serve as two of the many antagonists of RWBY. According to RWBY: Amity Arena and the RWBY Scholastic novel Roman Holiday, they are canon.[1]

The two are first seen together in the Volume 2, Chapter 4: Painting The Town. When Roman Torchwick makes his way into an Atlesian Paladin, a fight ensues and team RWBY destroys the mech, leaving Roman unprotected. Yang fires a blast from Ember Celica. However, Neo appears out of nowhere with her parasol, Hush, and shields Roman from the blast. She bows, and when Yang runs forward to punch the parasol, the two shatter into thin air immediately upon contact, and are next seen safe in an airship.

Later, Roman ends up in prison due to the plans of his boss.

The two are next seen when Neo appears disguised as an Atlesian officer with Roman's hat and weapon in hand. The two are later shown on an airship, causing havoc.

In Volume 3, Chapter 11: Heroes and Monsters, Ruby Rose makes her way on top of the airship to stop their plans. Roman tells Neo to go see who landed on top of their ship, and she nods and leaves immediately. After Neo sees who it is, she sends a text message to Roman with the words, "Guess who?" and a picture of Ruby. Roman groans and makes his way up to the top of the ship.

The three battle together, Neo and Torchwick VS Ruby. Roman and Neo work excellently in combat together, using nothing but silence to signal the other for the next attack they perform together, and easily manage to overcome Ruby. Ruby is seen dangling off the ship, holding on by her scythe, when Neo pulls out the blade concealed in her parasol and points it towards the girl.

Ruby then surprises her by clicking the button on her parasol, which opens it up and carries Neo off the ship and into the wind. Ruby makes her way on top of the ship and Roman becomes angry. He lectures Ruby and beats her with his cane, Melodic Cudgel. He has Ruby on the ground as he yells at her and he tells her how he's a survivor. But as if an irony to his previous words, he is swallowed by a Grimm, which are monsters attracted by negative emotion.

Neo is not seen again until Volume 6, Chapter 5: The Coming Storm. Neo casts an illusion that appears in a bar in Mistral to the surprise of Cinder Fall, who is Roman and Neo's previous boss, and intends to kill her. The two fight and Cinder seems confused as to why Neo intends to hurt her, but when they're told to take the fight outside, Neo's illusion shatters and Cinder casts a fireball towards her. Neo's parasol blocks it and shows Neo with Roman Torchwick's bowler hat on top of her head, showing Cinder why she has come to kill her, and that she isn't over the death of her former partner. Her clothes are shown ripped and she looks heartbroken. Cinder says she isn't to blame, and that Ruby is to blame, but Neo feels otherwise and continues to fight her till Cinder reveals her Maiden powers. Neo looks afraid because of this mysterious power, and decides to team up with Cinder Fall and agrees to hunt down Ruby. It's unknown if Neo will follow through with her original goal, but her theme song One Thing expresses Neo's hatred toward Cinder.

Neo is next seen in Volume 6, Chapter 13: Our Way. She's seen wearing not just Roman's bowler hat, but also his gray scarf.

In the novel which features Roman and Neo as the main characters, we see how their relationship started and grew into what it when we see them in the show.

In Chapter Eleven: Trivial Pursuit, Neo sees Roman for the first time and became very interested in him.

In the following Chapter, Chapter Twelve: Double Trouble, Neo saves Roman's life. Roman becomes very interested in Neo as well and he feels like he owes her for saving his life.

In Chapter Fourteen: Tea For Two, Roman and Neo go on a tea "date". Neo blushed when Roman said he was impressed. Roman gets flustered at his internal thoughts on the notion of trying to impress her. Neo also gave Roman a new hat as a gift.

In Chapter Sixteen: Partners in Crime, Neo agrees to become Roman's Partner in Crime. Neo also practices her fencing skills with Roman, which lead to another "date". Over the following months, Neo and Roman became in sync with each other. It is also very clear that Roman can understand what Neo is saying, even though she is mute. Roman presents Neo with a gift, he keeps insisting it is not flowers. The present was her weapon, Hush. Neo also gifted Roman a new outfit fashioned and stitched by herself.

In Chapter Twenty-Two: Two For Tea, Neo hugs Roman tightly, something that, until this moment, Neo never really has done. Neo calls Roman her friend, her real friend when introducing him to her Parents. Neo's parents made it very clear they didn't like Roman being with their daughter. The interactions between Neo’s parents and Roman are that of parents meeting a daughter’s boyfriend for the first time. A later chapter is even titled “Meeting the Parents.”

In Chapter Twenty-Five: Smoke and Mirrors, Neo makes it very clear she doesn't want to loose Roman by holding onto his hand tightly keeping him from leaving to attempt to save Neo's life.

In Chapter Twenty-Six: Friends to the End, Neo calls Roman "Dum-dum". Neo teased Roman with a kiss on his cheek with Roman blushing as they start their new venture as Partners in Crime.

the two are also seen together throughout RWBY's spinoff series, RWBY Chibi, which is said to take from the canon pool of things and make it more dramatic for the sake of comedy.

In RWBY Chibi: Season 3, Episode 7 - Mysterious Red Button, Neo and Roman are seen with Cinder. The three find a red button which when they push, does different things for different people. When Cinder pushes it, an assortment of objects fall on top of her. Roman expresses how the button would be perfect for a trap to set on Ruby, and Neo uses signs to tell him not to push the button. Roman accidentally drops the button and falls down a hole. Neo frowns and holds out a sign that says, "He's a dum-dum," and then switches the sign to say, "But he's my dum-dum," and then she smiles, following him into the hole.

This is later joked about again in RWBY Amity Arena, RWBY's mobile game. Neo's card description describes her as "Cruel, vicious, and sadistic," but then proceeds to say, "But actually, she is sweet, petite, loving, and loyal, if you're a Dum-Dum, more specifically, HER Dum-Dum."

In RWBY Amity Arena during Valentine's Day, players received a message in their inbox that said, "Will you be our Dum-Dum?" with a crate attached, implying that Neo's term for Roman, "my Dum-Dum" is a confirmed term of romantic endearment. The two also share a team attack card called Partners in Crime. 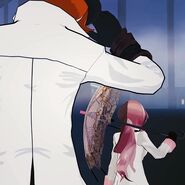 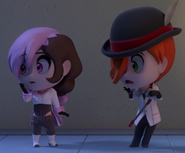