• Defrosting Ice Queen
• One Head Taller
• Opposites Attract
• The Power of Friendship — Played major role in Genya's character development; thoughts about Tanjiro helped Genya to not give up in the face of danger.

“I won't let you harm him in any way.”
— Tanjiro to Sanemi about Genya, Kimetsu no Yaiba Chapter 133

GenTan is the slash ship between Genya Shinazugawa and Tanjiro Kamado from the Demon Slayer fandom.

Genya and Tanjiro meet during the Final Selection exam. He is very impatient and angry, and when he hits Kanata, Tanjiro intervenes, threatening to break his arm. Genya dares him to. They meet again, at the Butterfly Estate, when Genya intentionally bumps into Tanjiro. He recognizes Genya as a boy from the Final Selection and notes his outstanding physique form. Tanjiro also notices Genya’s demon smell. Genya keeps walking, ignoring Tanjiro’s greeting.

Later, Tanjiro runs into Genya in the hot springs at the Swordsmith Village. Tanjiro accidentally catches Genya’s tooth who stands in the hot spring and keeps wrenching out his own teeth. Tanjiro remembers his name, but Genya yells at him and tells him to drop dead. Instead, Tanjiro enthusiastically jumps into the pool and asks Genya how he has been. Genya dunks his head into the water and tells him not to speak to him again. Tanjiro notices that he hoped they could be friends since they were both naked in the pool together, but relationships between people are apparently too difficult.

Since Genya never attends meals, Tanjiro brings leftovers to his room, but Genya is not there. Eventually, Tanjiro manages to find Genya, and as Tanjiro himself keeps eating, he enthusiastically fills him in on the latest news. Genya seems to be angry as Tanjiro talks to him as if they were friends. Tanjiro wants to make sure they are actually friends, but Genya seems to have not forgotten that time, when Tanjiro broke his arm. He also heatedly asks Tanjiro not to call him by his first name. Tanjiro continues trying to butter him up by offering rice crackers, but Genya’s exasperation only grows. Tanjiro notices that Genya’s tooth has grown back and shows him his discarded tooth that he kept. Genya doesn’t seem impressed and after calling Tanjiro insane, he kicks him out of his room.

Genya appears during Tanjiro and Nezuko's battle against Hantengu, aiming his gun at the Upper Rank's staff-wielding form. When Tanjiro is abducted by one of the Demons, he asks Nezuko to stay and help Genya. When Tanjiro goes to look for Hantengu's last form, Aizetsu, and sees him impaled to a tree with his own spear as Genya stands in front of him, holding the Demon's head. Tanjiro's relief over Genya's safety and the defeat of Aizetsu quickly switches to horror as Genya turns to reveal his demonfied face. Genya grabs him, declaring that he will be the one to defeat the Upper Rank and become a Hashira, not Tanjiro. Realizing that Genya has not succumbed to Demon instincts, Tanjiro gives full support of his goal – much to Genya's surprise. He tries to call bluff, but he looks into Tanjiro’s eyes and deems them to be innocent.

Tanjiro witnesses Sanemi telling Genya he should quit the sorps. Genya’s brother tries to strike him, but Tanjiro lurches forward to save him fight for Genya. He yells at Sanemi, telling him Genya risked his life to help them and he won’t let Sanemi hurt Genya in any way. Tanjiro and Sanemi end up fighting each other, and all Genya can do is sit and watch in amazement how someone decided to stand up to defend him. Genya is critically wounded in fight with Kokushibo, he almost gives up, but them he remembers Tanjiro and the memory of him gives him strength to rage on. When Tanjiro receives news about Genya’s death, he cries.

GenTan is very well received within the fandom. The fandom appreciates how Tanjiro’s kindness turned Genya’s initial disdain and anger into something more warm that eventually led to their friendship. Despite Genya's annoyance with Tanjiro that started when the former broke his arm, Tanjiro managed to earn Genya's respect and affection. It hasn't gone unnoticed how the very first genuine smile Genya had shown was meant for Tanjiro and his sister, when they managed to survive and reunite after Nezuko almost died and Tanjiro was extremely happy — Genya shared that happiness with them.

GenTan is Genya’s most popular and Tanjiro’s seventh most popular pairing on AO3. Fans love to imagine what future the two might have had if Genya hadn't died by the demon's hand. Modern Day AU stories are especially popular. Sanemi and Nezuko often appear in GenTan fan works, since they're their closest relatives. 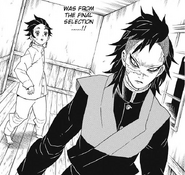 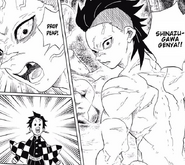 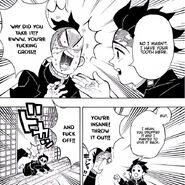 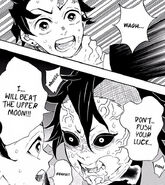 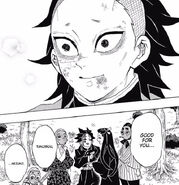 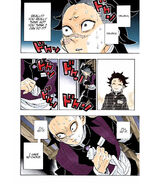