Allies; Genya is dead (Pre-timeskip)
Both are reincarnated (Post-timeskip)

• Birds of a Feather — Both are human Demons.

GenZuko is the het ship between Genya Shinazugawa and Nezuko Kamado from the Demon Slayer fandom.

The two first meet in the Swordsmith Village, although it most likely took place behind the scenes, as Genya also does not show up for any meals, having told the villagers he wouldn't eat at all.

When Nezuko and Tanjiro fight Hantengu, Genya appears on the roof aiming his gun at the Upper Rank's staff-wielding form, Sekido. He fires and they all engage in a fight with the enemy. Before Tanjiro is abducted by one of the demons, he asks Nezuko to help Genya. One of the demons impales Genya with a Jūmonji yari. Aizetsu attempts to pull the spear out of Genya to kill Nezuko, but he can’t. Genya shoots at the surprised Demon, blowing his head off. The battle resumes, and Nezuko and Genya fight demons.

When Mitsuri fights Zohakuten, Genya and Nezuko try to help her. When she loses consciousness, Nezuko and Genya try to pull her away from the enemy. They are panicked and Genya, being the tallest, grabs them all and carries them away. They rush to find the main body of the Demon to cut it into pieces. Nezuko and Genya, along with Tanjiro, are fighting a Demon-controlled tree, Genya has no special power to save himself and his friends, so he starts chewing on the tree trunk; Nezuko transforms into a demon as well and helps him.

When they manage to cut the tree, the Demon escapes and Genya is so frustrated that he angrily rips out a tree from the roots and throws it, forcing Nezuko to dip to the ground. Nezuko and Genya try to chase the Demon, but Tanjiro is much quicker than both of them in the demon form; he leaves them behind, gaping in astonishment. Eventually, all three fight the demon, and when Nezuko falls off a cliff, Genya tries to call her.

One time Nezuko almost disintegrates in the sunlight, when the sun rises and her skin begins to burn. However, she survives and becomes a Demon immune to the sun. The friends reunite and she happily hugs her brother. Genya stands aside and looks at them with the first smile on his face. Some time after Genya’s death, Nezuko starts becoming human once again. She begins to undergo drastic changes and memories flash in front of her eyes. One of them is a memory of smiling Genya. After the final battle, Sanemi, Genya's older brother, runs into happy Nezuko, who reminds him of Genya.

GenZuko is considered a rareship. Many KnY fans enjoy the friendship between Nezuko and Genya and in fanworks the two often appear as part of the bigger friend group consisting of Tanjiro, Inosuke, and Zenitsu. Some readers of the manga have noticed how similar the situations are that Nezuko and Genya have found themselves in. Both are younger siblings who can become demons and have a very loving (and in Genya's case, complicated) relationship with their older brothers, who would do anything to protect them from the evils of the world. It is very probable that had Genya lived, he and Nezuko could have bonded over that and formed a deeper relationship. 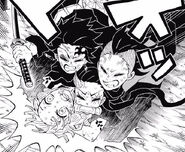 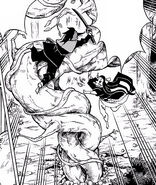 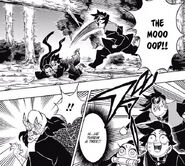 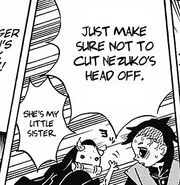 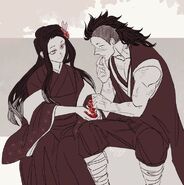