Shipping Wiki
Register
Don't have an account?
Sign In
Advertisement
in: Ships, Ships/Het, Your Turn To Die/Ships,
and 5 more

Ginkanna is the het ship between Gin Ibushi and Kanna Kizuchi from the Your Turn To Die fandom.

Kanna and Gin are the youngest participants in the Death Game. They both have some of the lowest win rate percentages, and are next to each other in the standings, at 13th and 14th place, and 2.7% and 1.3% respectively. In part to being children, they are also regarded as some of the weakest people. Q-taro explicitly calls them out during the first Main Game, although this is to get them to prove that they have worth. Gin and Kanna both aren't able to say anything for themselves at first.

On the third floor, Kanna and Gin are both available for the Memory Dance and Fly Swatter attractions. During the final attraction, when Gin is about to get pricked, Kanna begs Ranger to let her take Gin's place, not knowing what else she can do.

Once Gin joins Sara, he can use his partner ability to sniff Kanna. This startles her and she appears to hit Gin by reflex. Gin complains that it hurts and Kanna apologizes, seemingly unaware of what she just did. Later on, when the group gets ready to try the escape route, Gin can sniff Kanna again. Kanna gets surprised and asks Gin to please not sniff her. Gin gets upset and tells her not to treat him like a pervert because he's not doing it because he wants to. Sara tells Gin he doesn't have to sniff Kanna to tell that she smells nice, and Kanna gets embarrassed and questions what's with them.

After coming to the blocked exit, Gin finds Kanna's phone which she had dropped on the Victory Stairs. In the second Main Game, when Kanna says that she didn't get the Sacrifice when she traded with Sara, Gin exclaims that Kanna must be lying to confuse everyone. Once the time for the final vote comes, Sara tells Gin to vote for Kanna, so that the guilt of deciding who dies falls on Sara. Gin obliges hesitantly.

In 4-koma S2 #08, Kanna pinches Gin's cheek alongside Shin, and demands that Gin give her a better nickname than "Bucket Girl". In a tweet from July 28 2021, Gin points at Kanna's bucket, which she had taken off. He says it looks dirty and wonders if she dropped it. Kanna replies that she's going to take it to the infirmary because she thinks it's ill.

Ginkanna isn't a very popular ship since Gin and Kanna don't interact too much. Ginkanna is shipped for Gin and Kanna being the youngest participants and having similar ages. While some are okay with the ship romantically due to both being minors and only having a two year age difference, others are uncomfortable with it due to ages being very important with children so young. Additionally, some think Gin is too young to date. As a result, it is often enjoyed more as a friendship. Some see the two as siblings, or just best friends. In combination with Gin being canonically autistic, Kanna is sometimes headcanoned as autistic, giving the two something to bond over. Gin and Kanna also both have a special object that they're both attached to; Mew-chan for Gin and her bucket for Kanna. Ginkanna rivals Hinakanna romantically, and Ginsara and Kizuchi Sisters platonically. 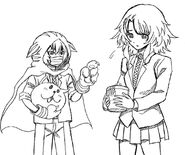