“Alright, do your best, Tomioka-san. I will cheer for you.”
— Shinobu to Giyuu on Kimetsu no Yaiba Official Light Novel.

GiyuShino is the het ship between Shinobu Kocho and Giyuu Tomioka from the Demon Slayer fandom.

Shinobu, the Insect Pillar, was first introduced with Giyuu, the Water Pillar, on Natagumo Mountain Arc. She says they are constantly on joint missions lately and should develop a good relationship. However, Giyu answers his only concern is slaying demons.

Although Giyu maintains a cold and distant stance, among all the pillars, Shinobu is the one who understands him the most and has the best relationship with him.

Shinobu says that Giyuu is hated by other people, which can seem mean, but in reality she actually supports him. At Official Light Novel: Kimetsu no Yaiba: One-Winged Butterfly, most of the Hashiras were criticizing Giyu and wanted to fire him from the position as the Water Pillar. In this case, Shinobu intervened in favor of the Water Pillar, and she went to great lengths to help him bond and to make him smile.

In Giyuu Tomioka: Gaiden, the only official character besides Giyuu is Shinobu. In this story, despite being off duty, she helps him on his mission and then they go out to have dinner together. At that moment she sees him smile, being the only one in the series so far.

In the second fan book, Gyomei mentions what he thinks of several of the Hashira and says that both Giyu and Shinobu enjoy talking to each other. Giyu also states how he feels about Shinobu, saying he thinks she is both hardworking and serious, along with stating that she talks to him a lot and mentions she looks pale, implying he might be worried about it. Shinobu believes that he should talk more, according to her section.

In the Pillars meeting, when most of the other pillars think Giyu deserves a punishment for defending a demon, Nezuko Kamado, Shinobu says he did not offer resistance to come with her to headquarters and they should wait for the patron to come before judging him. Also, before going for a mission together, Shinobu Kocho said "The moon is beautiful tonight, isn't it?" this sentence is usually used by Japanese people when they confess their love.

GiyuShino is one of the most loved ships by the community, as evidenced by the great amount of fanart and fanfiction that exists about them. It is currently the most popular het ship from Demon Slayer fandom in Pixiv.net, AO3 sites and Wattpad according to the amount of works with their tag. In the fandom they are portrayed in a similar way as canon, with Shinobu teasing and/or flirting with Giyu while he is oblivious. GiyuShino has further been fueled by the release of the second fan book, especially in the wake of Gyomei's feelings about the two towards each other. 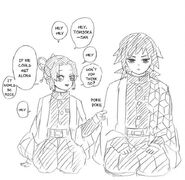 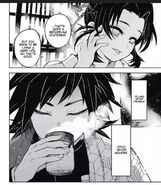 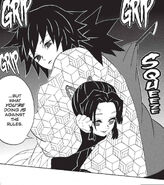 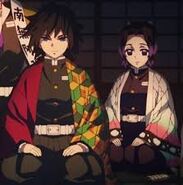 Shinobu smiling at Giyu after telling him "The moon is beautiful tonight, isn't it?"

Giyuu ignoring it by answering something else 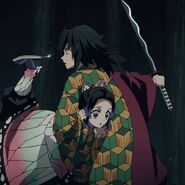 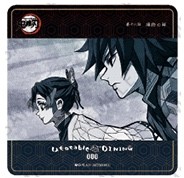 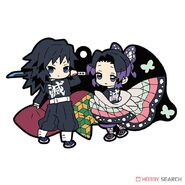 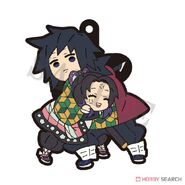