GoBul is the het ship between Son Goku and Bulma from the Dragon Ball fandom.

Goku meets Bulma when he is still a child. She is heading to his house in search of his Dragon Ball when she accidentally crashed into him with her car. Goku had never seen another person besides his adoptive grandfather before and thought she was a monster or a witch. After realizing their misunderstanding, Goku invited Bulma over to his house for a meal. She saw his Dragon Ball and asked for it but Goku refused to give it to her because it was an important keepsake, even after she attempted to seduce him. Bulma convinced Goku to join him on her journey to find the Dragon Balls instead.

Goku aids Bulma in her search for the Dragon Balls. He is sometimes upset at how selfish she is, such as when she did not want to help Turtle get back to the ocean, and she gets annoyed by his lack of understanding of social norms whenever he meets new human beings or strips in public. Goku saves Bulma sometimes and she provides help with her engineering knowledge.

Goku and Bulma later part ways after the eternal dragon is first summoned but are reunited at the 21st World Martial Arts Tournament. Bulma cheers for him during his matches and helps wake him up after being hypnotized by shouting that his dinner is ready. She thought that he was killed but Master Roshi during the finals and cried but was relieved when he turned out to be okay.

Goku later parts ways with Bulma yet again but meets up with again on a couple of occasions. At one point she accompanies him to search for a Dragon Ball and they encounter General Blue. She also later tracks down Goku and shows concern for him storming the Red Ribbon Army's headquarters but finds that he already defeated them all by the time she arrives. She helps Goku with tracking the location of the last Dragon Ball and explains that something is interfering with the signal on the radar.

Goku later meets Bulma again as a young adult during the 23rd World Martial Arts Tournament. Bulma admits that Goku is handsome now that he is grown up. Bulma roots for Goku in all of his battles. However, Goku got engaged to Chi-Chi and later married her. Bulma supports their relationship and attends their wedding in the anime. She continues to be friends with Goku and with his new wife Chi-Chi. During their time on Planet Namek Bulma expresses that she 'missed the boat', in regards to a relationship with Goku. On one occasion Bulma and Chi-Chi joke about trading their husbands with each other.

GoBul is a less popular ship, yet still the second and third most popular het ships for Goku and Bulma respectively. Supporters felt that Bulma may be a better match for Goku then Chi-Chi since Bulma had fewer issues than Chi-Chi with Goku's life-styles. It is more popular among fans who like to focus on the original series Dragon Ball as Goku is the protagonist while Bulma is considered to be the main heroine. It is sometimes used as a what-if scenario in fanfics.

Son Goku and Bulma Briefs meet for the first time.

Bulma trying to flirt with Goku.

Goku and Bulma reunite after 5 years.

Goku and Bulma trying to sleep.

Bulma trying to convince Goku to her plan.

Goku and Bulma on Kami's Lookout.

Goku having lunch with pregnant Bulma. 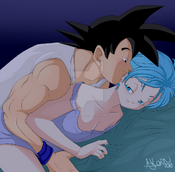 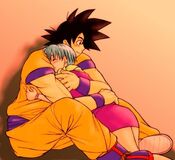 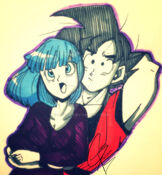 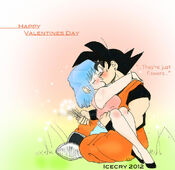 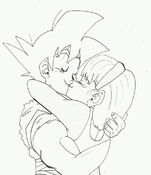 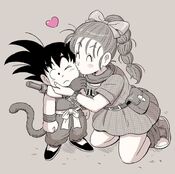 WHAT IF Goku Married Bulma?

WHAT IF Goku Married Bulma? Part 2

WHAT IF Goku Married Bulma? Part 3
Community content is available under CC-BY-SA unless otherwise noted.
Advertisement